Propaganda was an American gothic subculture magazine. It was founded in 1982 by Fred H. Berger, a photographer from New York City. Berger's photography was featured prominently in the magazine. Propaganda focused on all aspects of the goth culture, including fashion, sexuality, music, art and literature. Propaganda was, at the time of its final issue in 2002, the longest running and most popular gothic subculture magazine in the United States. [1]

Photographer and journalist Fred H. Berger was inspired to create Propaganda based on his interest in the gothic, industrial, darkwave, occult and fetish subcultures. Berger's official title was not editor-in-chief, but "Propaganda Minister". [2] Between 1991 and 1995 Propaganda produced three videos, The Trilogy, Blood Countess, and The Ritual. Blood Countess is about Elizabeth Bathory. [3] The magazine featured interviews and coverage of music acts such as Bauhaus, Xmal Deutschland, Laibach, Skinny Puppy, Fields of the Nephilim, Sisters of Mercy, Diamanda Galas, Jesus & Mary Chain, Siouxsie And The Banshees, Coil, Christian Death, Alien Sex Fiend, Swans, Legendary Pink Dots, My Life With the Thrill Kill Kult, Shadow Project, Xymox, Death in June, Dead Can Dance, Front Line Assembly, The Cure, Danzig and Love & Rockets. [2] [4] [5] Other subjects included articles about the Salem Witch Trials, the Holy Lance, Nazi-fetish chic, the Masque of the Red Death, Oscar Wilde, the Haunted Summer with Lord Byron and Mary Shelley, and queer chic authors Jean Genet and Yukio Mishima. Interviews with favorite goth authors Anne Rice and Poppy Z. Brite were also featured, as well as travel pieces such as "Old Haunts In New Orleans." [2] [4]

Berger wrote most of the esoteric, historical and literary articles during the magazine's run. Music editors Paul Hart & Stephanie Young handled most of the music related aspects of the magazine from 1985 to 2002, interviewing bands and artists. Senior Editor George Petros wrote musical and artist features such as Genitorturers and H.R. Giger as well as news content for the Propaganda website from 2000 to 2005. [6] [7] (The Propaganda website closed three years after the print magazine's termination.)

Berger's photography was a large focus for the magazine. Androgynous male models were commonly used. [1] [8] Propaganda Issue No. 25 (Winter 1999) featured a heroin chic cover story called "Anarchy in Moscow" with photo essay by Berger. It was about a junkie hustler in Moscow during the social collapse of Russia after the fall of communism, and it generated more international interest than any article ever featured in Propaganda.

Dark fantasy and horror writer Nancy Kilpatrick called Propaganda "probably the only subculture publication known to just about every goth on the planet," in her 2004 book The Goth Bible: A Compendium for the Darkly Inclined. [9] Rosemary Ellen Guiley described Berger as "a remarkable photographer who captures the eerie and macabre" in her 1994 book The Complete Vampire Companion. [10] Published by FIT in 2008, a particularly stylish and beautifully produced book is Gothic: Dark Glamour in which author Valerie Steele refers to Berger's photo shoots as "polymorphous perverse gothic fantasies." [11] Matt Riser, the publisher of Newgrave, another gothic subculture magazine, credited Propaganda as being an influence in him starting his own publication. [8]

The goth subculture is a subculture that began in the UK during the early 1980s, where it developed from the audience of gothic rock, an offshoot of the post-punk genre. The name goth was derived directly from the music genre. Notable post-punk groups that presaged that genre and helped develop and shape the subculture, include Siouxsie and the Banshees, Joy Division, Bauhaus and The Cure.

Death rock is a rock music subgenre incorporating horror elements and gothic theatrics. It emerged from punk rock on the West Coast of the United States in the early 1980s and overlaps with the gothic rock and horror punk genres. Notable death rock acts include Christian Death, Kommunity FK, 45 Grave, Zombina And The Skeletones, and Super Heroines.

Gothic fashion is a clothing style marked by dark, mysterious, antiquated and homogeneous features. It is worn by members of the Goth subculture. dress, typical gothic fashion includes dyed black hair, dark lipstick and dark clothing. Both male and female goths can wear dark eyeliner and dark nail polish - most often black. Male goths use cosmetics at a higher rate than other men. Styles are often borrowed from the punk fashion, Victorians and Elizabethans. Goth fashion is sometimes confused with heavy metal fashion and emo fashion.

Dark wave or darkwave is a music genre that emerged from the new wave and post-punk movement of the late 1970s. Dark wave compositions are largely based on minor key tonality and introspective lyrics, and have been perceived as being dark, romantic, and bleak, with an undertone of sorrow. Common features include the use of chordophones such as electric and acoustic guitar, violin, and piano, as well as electronic instruments such as synthesizer, sampler, and drum machine. The genre embraces a range of styles including cold wave, ethereal wave, gothic rock, neoclassical dark wave, and neofolk.

The vampire lifestyle, vampire subculture or vampire community is an alternative lifestyle and subculturr based around the mythology of and popular culture based on vampires. Those within the subculture commonly identify with or as vampires, with participants typically taking heavy inspiration from media and pop culture based of vampiric folklore and legend, such as the tabletop role-playing game Vampire: The Masquerade and the book series The Vampire Chronicles by author Anne Rice. Practices within the vampire community range from blood-drinking from willing donors to organising groups known as 'houses' and 'courts' of self-identified vampires.

A rivethead or rivet head is a person associated with the industrial dance music scene. In stark contrast to the original industrial culture, whose performers and heterogeneous audience were sometimes referred to as "industrialists", the rivethead scene is a coherent youth culture closely linked to a discernible fashion style. The scene emerged in the late 1980s on the basis of electro-industrial, EBM, and industrial rock music. The associated dress style draws on military fashion and punk aesthetics with hints of fetish wear, mainly inspired by the scene's musical protagonists. 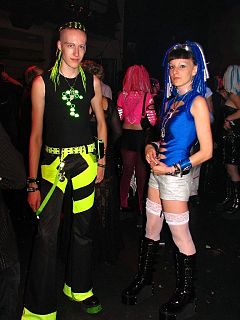 Cybergoth is a subculture that derives from elements of goth, raver, rivethead and cyberpunk fashion. Cybergoths is a part of industrial subcultures, and not a part of goth subculture. 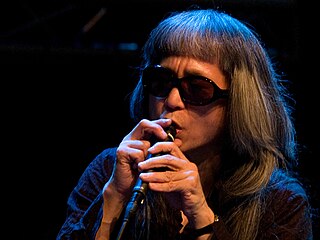 Japanoise, a portmanteau of "Japanese" and "noise", is the noise music scene of Japan.

Vampire Beach Babes are a Canadian gothabilly band, from Toronto, Ontario who have toured internationally. Their music combines pop rhythms, goth rock sounds, and electronic/industrial elements. The band is fronted by Baron Marcus and includes a changing roster of members.

Gothic belly dance, also named and separated in substyles as Gothic fusion belly dance, dark fusion belly dance and Gothic tribal fusion, is a recently founded dance art movement, distilled from the influences of Middle Eastern dance, tribal fusion, Goth subculture, and Neopaganism. Originating in the United States in the 1990s, it has spread to be practiced by amateur and professional dancers around the world, and it is growing with the spread of tribal belly dance formats.

The Toronto goth scene, the cultural locus of the goth subculture in Toronto, Ontario, Canada and the associated music and fashion scene, has distinct origins from goth scenes of other goth subcultural centres, such as the UK or Germany. Originally known as the "Batcavers", the term "goth" appeared only after 1988, when it was applied to the pre-existent subculture. Distinctive features included internationally recognized gothic and vampiric fashion store 'Siren', a goth-industrial bar named 'Sanctuary: The Vampire Sex Bar', and Forever Knight, a television series about an 800-year-old vampire living in Toronto. In Toronto, the goths did not seek to reject mainstream status, and achieved partial acceptance throughout the mid to late 1990s.

Morbid Curiosity was an annual magazine published in San Francisco, California between 1997 and 2006. Helmed by editor and publisher Loren Rhoads, the magazine was devoted to confessional first-person nonfiction essays. Morbid Curiosity explored "the unsavory, unwise, unorthodox, and unusual: all the dark elements that make life truly worth living." 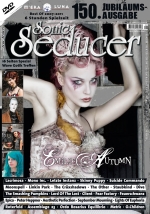 Sonic Seducer is a German music magazine that covers gothic rock, new wave, EBM and other kinds of electronic music and culture. The magazine is noted for organizing the annual M'era Luna Festival. Since its inception in 1994, the Sonic Seducer has become one of the major publications of the dark culture in Germany.

Orkus is a monthly German music and culture magazine published by the Zoomia Media Group. Despite its subtitle and its web tagline, it includes all popular music genres including metal, medieval rock, Neue Deutsche Härte, alternative rock, electro and futurepop. The gothic rock, dark wave and industrial music genres have had only a minor presence since the late 1990s.