Protein subfamily is a level of protein classification, based on their close evolutionary relationship. It is below the larger levels of protein superfamily and protein family. [1]

Proteins typically share greater sequence and function similarities with other subfamily members than they do with members of their wider family. [1] [2] For example, in the SCOP classification system, members of a subfamily share the same interaction interfaces and interaction partners. [3] These are stricter criteria than for a family, where members have similar structures, but may be more distantly related and so have different interfaces. Subfamilies are assigned by a variety of methods, including sequence similarity, [4] motifs linked to function, [5] or phylogenetic clade. [6] [7] There is no exact and consistent distinction between a subfamily and a family. The same group of proteins may sometimes be described as a family or a subfamily depending on the context. 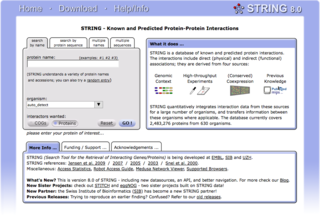 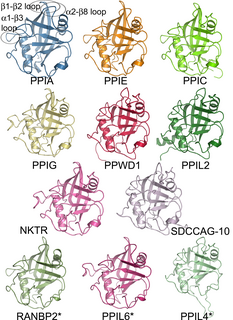 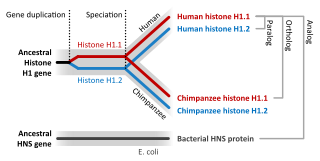 Sequence homology is the biological homology between DNA, RNA, or protein sequences, defined in terms of shared ancestry in the evolutionary history of life. Two segments of DNA can have shared ancestry because of three phenomena: either a speciation event (orthologs), or a duplication event (paralogs), or else a horizontal gene transfer event (xenologs).

Pfam is a database of protein families that includes their annotations and multiple sequence alignments generated using hidden Markov models. The most recent version, Pfam 32.0, was released in September 2018 and contains 17,929 families. 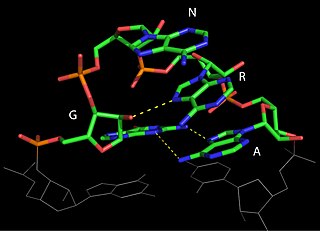 Tetraloops are a type of four-base hairpin loop motifs in RNA secondary structure that cap many double helices. There are many variants of the tetraloop. The published ones include ANYA, CUYG, GNRA, UNAC and UNCG.

This is a list of computer programs that are used for nucleic acids simulations.

The European Nucleotide Archive (ENA) is a repository providing free and unrestricted access to annotated DNA and RNA sequences. It also stores complementary information such as experimental procedures, details of sequence assembly and other metadata related to sequencing projects. The archive is composed of three main databases: the Sequence Read Archive, the Trace Archive and the EMBL Nucleotide Sequence Database. The ENA is produced and maintained by the European Bioinformatics Institute and is a member of the International Nucleotide Sequence Database Collaboration (INSDC) along with the DNA Data Bank of Japan and GenBank.

In bioinformatics, the PANTHER classification system is a large curated biological database of gene/protein families and their functionally related subfamilies that can be used to classify and identify the function of gene products. PANTHER is part of the Gene Ontology Reference Genome Project designed to classify proteins and their genes for high-throughput analysis.

Alexander George Bateman is a computational biologist and Head of Protein Sequence Resources at the European Bioinformatics Institute (EBI), part of the European Molecular Biology Laboratory (EMBL) in Cambridge, UK. He has led the development of the Pfam biological database and introduced the Rfam database of RNA families. He has also been involved in the use of Wikipedia for community-based annotation of biological databases.

The ViennaRNA Package is a set of standalone programs and libraries used for prediction and analysis of RNA secondary structures. The source code for the package is distributed freely and compiled binaries are available for Linux, macOS and Windows platforms. The original paper has been cited over 2000 times.

In molecular biology, MvirDB is a publicly available database that stores information on toxins, virulence factors and antibiotic resistance genes. Sources that this database uses for DNA and protein information include: Tox-Prot, SCORPION, the PRINTS Virulence Factors, VFDB, TVFac, Islander, ARGO and VIDA. The database provides a BLAST tool that allows the user to query their sequence against all DNA and protein sequences in MvirDB. Information on virulence factors can be obtained from the usage of the provided browser tool. Once the browser tool is used, the results are returned as a readable table that is organized by ascending E-Values, each of which are hyperlinked to their related page. MvirDB is implemented in an Oracle 10g relational database.