Proverbial Reggae was the second album by Jamaican Roots Reggae band The Gladiators, recorded and released in 1978 on Virgin Records' Front Line imprint.

All songs by Albert Griffiths unless noted. 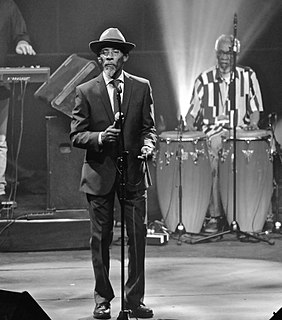 Linton Kwesi Johnson, also known as LKJ, is a Jamaican dub poet and activist who has been based in the United Kingdom since 1963. In 2002 he became the second living poet, and the only black poet, to be published in the Penguin Modern Classics series. His performance poetry involves the recitation of his own verse in Jamaican patois over dub-reggae, usually written in collaboration with renowned British reggae producer/artist Dennis Bovell.

Dub poetry is a form of performance poetry of West Indian origin, which evolved out of dub music in Kingston, Jamaica, in the 1970s, as well as in London, England and Toronto, Canada, both, cities which have large populations of Caribbean immigrants. The term "Dub Poetry" was coined by influential Dub artist Linton Kwesi Johnson in 1976, and further popularized by equally influential artist Oku Onoura, which consists of spoken word over reggae rhythms, originally found on the backing or "version" side of a 12 or 6 inch vinyl record.

Dennis Bovell is a Barbados-born reggae guitarist, bass player and record producer, based in England. He was a member of the British reggae band Matumbi, and released dub-reggae records under his own name as well as the pseudonym Blackbeard. He is most widely known for his decades-spanning collaborations with Linton Kwesi Johnson.

Forces of Victory is an album by the dub poet Linton Kwesi Johnson. It was released in 1979 on Island Records. 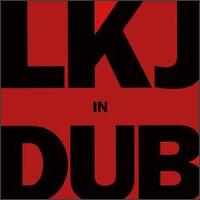 LKJ in Dub is an album by the dub poet Linton Kwesi Johnson, released in 1980 on Island Records. It was produced by Dennis Bovell. It contains dub versions of tracks from the two previous LKJ albums, Forces of Victory and Bass Culture.

Making History is an album by the dub poet Linton Kwesi Johnson. It was released in 1984 on Island Records. It was produced by Dennis Bovell.

Roy Samuel Reid, better known as I-Roy, was a Jamaican DJ who had a very prolific career during the 1970s. His song "Sidewalk Killer" is better known in the 2004 video game Grand Theft Auto: San Andreas in the radio station called K-Jah West Radio.

The Meditations are a reggae vocal harmony group from Jamaica formed in late 1974. They have released several studio albums and are still performing in the 2000s and today.

Dread Beat an' Blood is an album by Poet and the Roots released in 1978 on the Front Line label. It was produced by Vivian Weathers and Linton Kwesi Johnson. The 'Poet' is dub poet Johnson and 'the Roots' are Dennis Bovell, Lloyd "Jah Bunny" Donaldson, Desmond Craig, Winston Curniffe, Everald Forrest, Floyd Lawson, John Varnom, Lila Weathers and Vivian Weathers. Vivian Weathers and Winston Curniffe were school friends of Johnson's. They all attended Tulse Hill Secondary School. Most of the tracks are based on poems that first appeared in Johnson's 1975 book of poetry Dread Beat an' Blood.

Trenchtown Mix Up was The Gladiators' debut LP, recorded at Joe Gibbs' studio and released in 1976 on TR International/Virgin Records'. It included re-recordings of two songs originally recorded at Studio One, and also included cover versions of Bob Marley's "Soul Rebel" and "Rude Boy Ska". Jo-Ann Greene, writing for Allmusic, said of the album: "Everything about this set is masterful, and it remains a classic".

Pick Up the Pieces is the debut album from Jamaican roots reggae group The Royals, collecting recordings made between 1973 and 1977, and produced by Royals lead vocalist and only constant member Roy Cousins. Musicians on the album include members of The Wailers, Soul Syndicate, The In Crowd, and the Now Generation Band. The album was later licensed to United Artists subsidiary Ballistic Records, and was reissued in an expanded form in 2002 by Pressure Sounds. The songs on the album have been described as "some of the most musically sublime expressions of Rastafarian faith and the hardships of ghetto living Jamaica has produced".

Clinton Fearon is a Jamaican reggae singer and musician. He has lived in Seattle, Washington since 1987.

Black Roots is a 1979 album by Sugar Minott. It was the first to appear on Minott's Black Roots label, and was described in the book Reggae: 100 Essential CDs – The Rough Guide as a "classic, which catches the singer on the cusp of the roots and dancehall phases, and with total control over his music." The album includes contributions from some of Jamaica's top session musicians including Leroy "Horsemouth" Wallace, Noel "Scully" Simms, Eric "Bingy Bunny" Lamont, Gladstone Anderson and Ansell Collins, with harmony vocals provided by Don Carlos, Lacksley Castell and Ashanti Waugh. Two of the tracks on the album had previously been issued as singles – "Hard Time Pressure" and "River Jordan". The album was described by Dave Thompson in his book Reggae & Caribbean Music as a "deeply dread collection...time has bestowed a stately uniqueness to it". Alex Henderson, writing for AllMusic, said of the album: "If you combined Stax's raw production style with the type of sweetness that characterized a lot of Chicago, Detroit and Philadelphia soul and added a reggae beat, the outcome might sound something like Black Roots."

Serious Thing is a roots reggae album released in 1984 by the reggae trio The Gladiators.

Tradition are a United Kingdom-based reggae band. They enjoyed success with UK reggae audiences in the late 1970s, and were signed by RCA Records. They split up in 1983 but reformed over twenty years later.