Radio & Records (R&R) was a trade publication providing news and airplay information for the radio and music industries. [1] It started as an independent trade from 1973 to 2006 until VNU Media took over in 2006 and became a relaunched sister trade to Billboard , until its final issue in 2009.

The company was founded in 1973 and published its first issue on October 5 of that year. Founders included Bob Wilson and Robert Kardashian. [2] The publication was issued in a weekly print edition, and it also issued a bi-annual Directory. R&R published its print edition from 1973 through August 4, 2006. Its weekly columns and features were intended to inform and educate the radio industry by each format, in addition to format-specific charts based on radio airplay. [3] With the June 25, 1999, issue, the charts became populated by data from Mediabase, a company that monitors and tracks radio airplay in cities across the U.S. [4] From 1987 to 2002 the magazine was owned by Westwood One, which collaborated with Radio & Records to use its charts and format editors for WWOne's syndicated radio programs.

On July 6, 2006, VNU, the parent company of Billboard and its sister publication Billboard Radio Monitor , announced the acquisition of Radio & Records, and a month later on August 1, officially took over ownership. R&R then fell under the operations of the Billboard Information Group.

On July 12, 2006, VNU announced that Radio & Records and Billboard Radio Monitor would be integrated into one publication called R&R. The new R&R published charts based on Nielsen BDS data. [5] Both Billboard Radio Monitor and R&R ceased publication as separate trades, with Monitor issuing its last edition on July 14, 2006 after 13 years, and R&R ending their 33-year run as an independent trade with its August 4, 2006 edition.

Radio & Records was relaunched as a magazine under new owners VNU Media on August 11, 2006, as R&R . The company, which has since changed its name to The Nielsen Company, currently publishes 6 daily email publications, 35 weekly email publications, and 4 websites, each serving segments of the radio and records industries.

Like Billboard, which is also owned by VNU Media, Radio & Records used data from Nielsen Broadcast Data Systems to develop the charts showing which records were played each week by leading radio stations. Prior to the merger, Radio & Records had used monitored charts and playlists from Mediabase. The format charts used during its run included CHR/Top 40, Rhythmic, Gospel, Urban, Country, Adult Contemporary, Rock, Christian, Latin and Smooth Jazz.

On June 3, 2009, R&R announced that they were immediately ceasing operations after the release of the June 5 issue. [6]

Use in countdown shows

In the music industry, the Top 40 is the current, 40 most-popular songs in a particular genre. It is the best-selling or most frequently broadcast popular music. Record charts have traditionally consisted of a total of 40 songs. "Top 40" or "contemporary hit radio" is also a radio format. Frequent variants of the Top 40 are the Top 10, Top 20, Top 30, Top 50, Top 75, Top 100 and Top 200.

American Top 40 is an internationally syndicated, independent song countdown radio program created by Casey Kasem, Don Bustany, Tom Rounds, and Ron Jacobs. The program is currently hosted by Ryan Seacrest and presented as an adjunct to his weekday radio program, On Air with Ryan Seacrest.

Contemporary hit radio is a radio format that is common in many countries that focuses on playing current and recurrent popular music as determined by the Top 40 music charts. There are several subcategories, dominantly focusing on rock, pop, or urban music. Used alone, CHR most often refers to the CHR-pop format. The term contemporary hit radio was coined in the early 1980s by Radio & Records magazine to designate Top 40 stations which continued to play hits from all musical genres as pop music splintered into Adult contemporary, Urban contemporary, Contemporary Christian and other formats.

American Country Countdown, also known as ACC, is a weekly internationally syndicated radio program which counts down the top 40 country songs of the previous week, from No. 40 to No. 1, according to the Billboard Country Airplay chart. The program premiered in 1973 and as of January 2006 is hosted by Kix Brooks.

WKTU is a rhythmic adult contemporary formatted radio station licensed to Lake Success, New York, a suburb of New York City. WKTU is owned by iHeartMedia and broadcasts from studios in the former AT&T Building in the Tribeca neighborhood of Manhattan; its transmitter is located at the Empire State Building.

WDVD is a hot adult contemporary radio station in Detroit, Michigan. Owned and operated by Cumulus Media, WDVD's studios and offices are located in the Fisher Building in Detroit's New Center district near downtown, while its transmitter is located in Oakland County in Royal Oak Township at 8 Mile Road and Wyoming Avenue.

KIMN is a commercial radio station in Denver, Colorado. The station is owned by Stan Kroenke's KSE Radio Ventures and airs a Hot AC radio format. Studios and offices are located on Colorado Boulevard in Glendale, and the transmitter site is on Mount Morrison west of Lakewood. 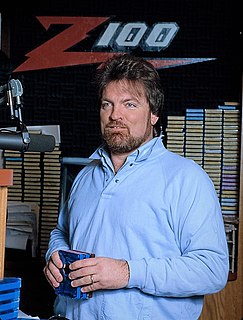 Casey's Top 40 was a syndicated radio music program that was distributed by the Westwood One radio network. The show was a vehicle for former American Top 40 host and co-creator Casey Kasem and ran for over nine years. Like Kasem's prior show, Casey's Top 40 aired on weekends, emanated from Hollywood, California, and was a countdown of the 40 biggest hits of the week on the popular music chart. However, unlike American Top 40, this show is not replayed or syndicated, whereas the former is still currently being replayed and syndicated.

The Weekend 22 is a Christian music countdown. It is a syndicated show that is broadcast nationwide in the United States and heard in over 150 cities across the country. The show is produced and syndicated worldwide by Amped Creative. Christian Care Ministry's Medi-Share is the main sponsor for the show. 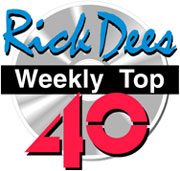 Rick Dees Weekly Top 40 is an internationally syndicated radio program created and hosted by American radio personality Rick Dees. It is currently heard on over 200 radio stations worldwide. It is distributed domestically by Compass Media Networks and internationally by Radio Express. It is also heard on Dees's official website for listeners in the United States only.

R&R was a weekly music trade publication that followed the radio industry and tracked the monitoring of current songs by format, station and audience cumes. The magazine was a sister publication to Billboard magazine and was mostly available through subscription to people who work in the radio industry and music chart enthusiasts, as well as various record stores and newsstands. On June 5, 2009, parent company AC Nielsen ceased operations on R&R just short of three years after acquiring the former independent trade periodical. When it ceased publication in 2009, R&R was the successor-in-interest of publications that traced their operations back to 1973.

American Top 20 was the name given to two weekly spinoffs of the music countdown program American Top 40. They were both hosted by Casey Kasem for Premiere Networks and premiered on the weekend of March 28, 1998, the same weekend Kasem returned to host American Top 40.

"My Savior My God" is a 2006 radio single by contemporary Christian musician, Aaron Shust, from his album, Anything Worth Saying. Although usually credited as author and composer, Shust used the verses from Dora Greenwell's 1873 poem, "I Am Not Skilled to Understand", and added a new bridge. The song became his first No. 1 hit on Christian radio by April 2006, staying there for eleven weeks, and was the most played song of the year on Christian adult contemporary radio. It received the "Song of the Year" award at the GMA Dove Awards of 2007. It lasted 49 weeks on the overall chart. The song is played in a D major key at 78 beats per minute. It was the second biggest Christian song of the 2000s, according to Billboard.