She has one son :

Family link of the spouses

She has been awarded:[ citation needed ]

Honours of Tunku Kamil of Kedah

He has been awarded:[ citation needed ] 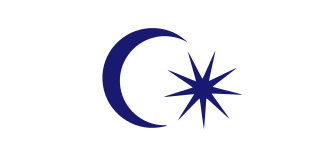 The Sultan of Johor is a hereditary seat and the sovereign ruler of the Malaysian state of Johor. In the past, the sultan held absolute power over the state and was advised by a bendahara. Currently, the role of bendahara has been taken over by chief minister with the constitutional monarchy system via Johor State Constitution. The Sultan is the constitutional head of state of Johor. The Sultan has his own independent military force, the Royal Johor Military Force. The Sultan is also the Head of Islam in Johor state. 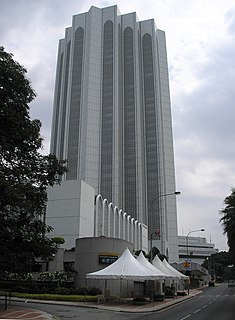 This article lists important figures and events in Malaysian public affairs during the year 1984, together with births and deaths of notable Malaysians.

This article lists important figures and events in Malayan public affairs during the year 1951, together with births and deaths of significant Malayans.

Sultan Salehuddin Shah ibni Almarhum Daeng Celak was the first Sultan of Selangor. He was the son of the famous Bugis warrior prince Daeng Celak. He took on the title of Sultan Sallehuddin of Selangor in 1742. The Bugis had already begun to settle on the West coast of the Malayan Peninsula towards the end of the 17th century.

Raja Ashman Shah ibni Almarhum Sultan Azlan Muhibbuddin Shah Al-Maghfur-lah was a member of the Perak Royal Family, the second son of Sultan Azlan Shah. He was the fourth in line to the throne of the Perak Sultanate when he was the Raja Kechil Sulung of Perak from 2010 until his death in 2012.

The Sultan of Kelantan is the constitutional head of Kelantan state in Malaysia. The executive power of the state is vested in him as the monarch of the state. The current sultan, Muhammad V, is the 29th Sultan of Kelantan. He is the Head of Islam in the state and the source of all titles, honours and dignities of its people. He was the 15th Yang di-Pertuan Agong. His reign as the monarch and head of state of Malaysia or Yang di-Pertuan Agong began on 13 December 2016, after his election on 14 October 2016 at the 243th (special) Conference of Rulers.

Sultan Azlan Muhibbuddin Shah ibni Almarhum Sultan Yussuff Izzuddin Shah Ghafarullahu-lah was the 34th sultan of Perak and the ninth Yang di-Pertuan Agong of Malaysia from 26 April 1989 to 25 April 1994. The child of a royal father and commoner mother, he grew up in Perak, Malaysia. During school he played field hockey, subsequently playing for the Perak team. He trained to be a lawyer in the United Kingdom. Upon returning to Malaysia, he soon became a judge and quickly rose through the legal ranks. In 1965, he became the youngest person appointed to the High Court of Malaya, and in 1982 he became the youngest ever Lord President of the Federal Court, the country's highest judicial rank. 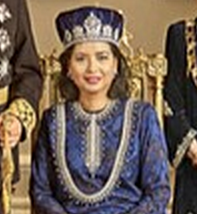 Raja Zarith Sofiah binti Almarhum Sultan Idris Iskandar Al-Mutawakkil Alallahi Shah Afifullah is the Permaisuri of Johor. She was born as a member of the Perak Royal Family. While still attending Somerville College, Oxford, she married the heir to the throne of Johor. Now a mother of six, she participates in the work of non-governmental organisations and universities, and writes a periodical column for a newspaper.

Tunku Annuar ibni Almarhum Sultan BadlishahPSM DKH DMK SPMK SSDK PSB was a member of the Kedah royal family and Chairman of the Regency Council of the Malaysian state of Kedah. He was the son of Sultan Badlishah and the half-brother of Sultan Abdul Halim.

The Al-Ghufran Royal Mausoleum is a Royal Mausoleum of Perak located near Ubudiah Mosque at Bukit Chandan in Jalan Istana, Kuala Kangsar, Malaysia. The first Sultan of Perak buried here was Sultan Idris Murshidul Azzam Shah I in 1916.

Raja Iskandar Zulkarnain ibni Almarhum Sultan Idris Iskandar Al-Mutawakkil Alallahi Shah Afifullah is the Raja Di-Hilir of Perak and the second in the line of succession to the throne of the Malaysian state of Perak since 20 June 2014.