After its establishment, the company's product offerings expanded to include items such as commercial and recreational hot air balloons, electronics manufacturing, large plastic storage containers for use in agriculture, pickup toppers, and winter outerwear.

Raven, along with Piccard Balloons and Semco were among the first manufacturers of hot air balloons that kicked off the resurgence of ballooning in the mid-1960s. In fact, Ed Yost began this series of events when he built and flew a 40 ft (12 m)-diameter balloon a distance of three miles on 22 October 1960. Raven subsequently built and sold some of the first modern hot air balloons, beginning in the mid-1960s. [4] [ needs update ]

However, in recent years,[ when? ] the company streamlined its operations, closed a number of its divisions and sold subsidiaries to reduce the company to its precision agriculture, engineered films, and Aerostar divisions. The U.S. military and other government agencies are among its clients, and besides the U.S. Department of Defense, Raven Industries has other big name customers such as Google. [5] [ non-primary source needed ]

As of 2019, the company has 3 business departments:

The company's main products are:

The company's high-altitude balloons are also used in scientific research by NASA [13] [14] [15] [16] and other research institutes [17] and in military purposes by USA armed forces. [6]

A hot-air balloon is a lighter-than-air aircraft consisting of a bag, called an envelope, which contains heated air. Suspended beneath is a gondola or wicker basket, which carries passengers and a source of heat, in most cases an open flame caused by burning liquid propane. The heated air inside the envelope makes it buoyant, since it has a lower density than the colder air outside the envelope. As with all aircraft, hot-air balloons cannot fly beyond the atmosphere. The envelope does not have to be sealed at the bottom, since the air inside the envelope is at about the same pressure as the surrounding air. In modern sport balloons the envelope is generally made from nylon fabric, and the inlet of the balloon is made from a fire-resistant material such as Nomex. Modern balloons have been made in many shapes, such as rocket ships and the shapes of various commercial products, though the traditional shape is used for most non-commercial and many commercial applications. 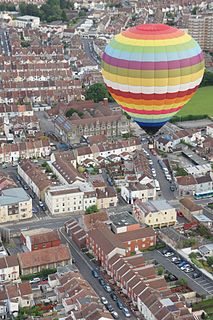 In aeronautics, a balloon is an unpowered aerostat, which remains aloft or floats due to its buoyancy. A balloon may be free, moving with the wind, or tethered to a fixed point. It is distinct from an airship, which is a powered aerostat that can propel itself through the air in a controlled manner.

High-altitude balloons are crewed or uncrewed balloons, usually filled with helium or hydrogen, that are released into the stratosphere, generally attaining between 18 and 37 km above sea level. In 2002, a balloon named BU60-1 reached a record altitude of 53.0 km.

AeroVironment, Inc. is an American defense contractor headquartered in Simi Valley, California, that is primarily involved in unmanned aerial vehicles (UAVs). Paul B. MacCready, Jr., a designer of human-powered aircraft, founded the company in 1971. The company is probably most well known for developing a series of lightweight human-powered and then solar-powered vehicles. AeroVironment is the Pentagon's top supplier of small drones — including the Raven, Wasp and Puma models. 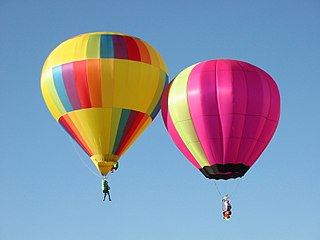 A hopper balloon is a small, one-person hot air balloon. Unlike a conventional hot air balloon where people ride inside a basket, there is no basket on a hopper balloon. Instead, the hopper pilot usually sits on a seat or wears a harness similar to a parachute harness. Hoppers are typically flown for recreation. These aircraft are sometimes called "Cloud Hoppers" or "Cloudhoppers." However, these terms formally refer to the products of a particular manufacturer, specifically Lindstrand Balloons. Nonetheless, "Cloudhopper" is used by many people as a genericized trademark, which refers to all craft of this general type. Most hopper balloons have envelopes that range in volume from 14,000 to 35,000 cubic feet and have a maximum flight duration of 1 to 1.5 hours. The two principal commercial balloon manufacturers today offering hopper balloons for sale are Cameron Balloons and Lindstrand Balloons. Most other hopper balloons are experimental aircraft designed and built by amateur constructors. 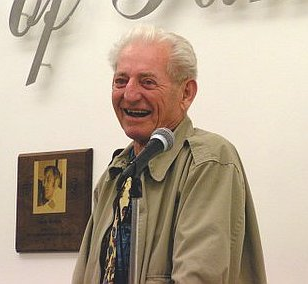 Paul Edward Yost was the American inventor of the modern hot air balloon and is referred to as the "Father of the Modern Day Hot-Air Balloon." He worked for a high-altitude research division of General Mills in the early 1950s when he left to establish Raven Industries in 1956, along with several colleagues from General Mills.

Otto C. Winzen (1917–1979) was a German – American aeronautics engineer who made significant advances in the materials and construction of high-altitude balloons after World War II.

Hot air ballooning is the activity of flying hot air balloons. Attractive aspects of ballooning include the exceptional quiet, the lack of a feeling of movement, and the bird's-eye view. Since the balloon moves with the direction of the winds, the passengers feel absolutely no wind, except for brief periods during the flight when the balloon climbs or descends into air currents of different direction or speed. Hot air ballooning has been recognized by Fédération Aéronautique Internationale (FAI) as the safest air sport in aviation, and fatalities in hot air balloon accidents are rare, according to statistics from the National Transportation Safety Board (NTSB).

Per Lindstrand is a Swedish aeronautical engineer, pilot, adventurer and entrepreneur. He is particularly known for his series of record-breaking trans-oceanic hot air balloon flights and, later, attempts to be the first to fly a Rozière balloon around the Earth – all with British entrepreneur, Sir Richard Branson. He is also the founder of eponymous Lindstrand Balloons hot air balloon manufacturer based in Oswestry, England. 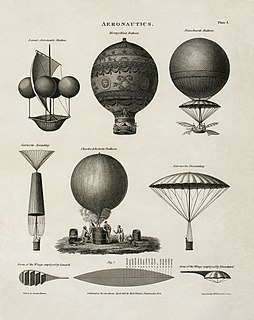 The history of ballooning, both with hot air and gas, spans many centuries. It includes many firsts, including the first human flight, first flight across the English Channel, first flight in North America, and first aircraft related disaster. 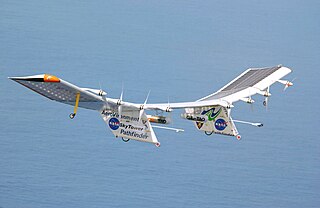 Atmospheric satellite or pseudo-satellite is a marketing term for an aircraft that operates in the atmosphere at high altitudes for extended periods of time, in order to provide services conventionally provided by an artificial satellite orbiting in space.

Loon LLC was an Alphabet Inc. subsidiary working on providing Internet access to rural and remote areas. The company used high-altitude balloons in the stratosphere at an altitude of 18 km (11 mi) to 25 km (16 mi) to create an aerial wireless network with up to 1 Mbit/s speeds. A reference to the balloons used, Project Loon began as a research and development project by X in 2011, but later spun out into a separate company in July 2018. In January 2021, it was announced that the company would be shut down.

World View Enterprises, Inc., doing business as World View, is a private American near-space exploration and technology company headquartered in Tucson, Arizona, founded with the goal of increasing access to and the utilization of the stratosphere for scientific, commercial, and economic purposes.

Vera Simons (1920–2012) was an inventor, artist, and balloonist. She became known in the 1950s and 1960s as a leader in high altitude gas balloon development and exploration, belonging to a group of pioneers known as the "Pre-Astronauts." 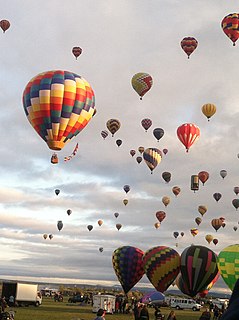 The Balloon Federation of America (BFA) is a 501c3 non-profit group for the advancement of lighter-than-air aviation which includes hot air and gas balloons. Founded in 1960, located in Indianola, Iowa. The BFA partners with the National Balloon Museum to induct outstanding individuals into the United States Ballooning Hall of Fame. The Federation presents multiple awards including the Ed Yost Master Pilot Award and the National Crew Person Award. The BFA facilitates balloon events by providing advice and guidance on FAA compliance.