The regimental depot of a regiment is its home base for recruiting and training. It is also where soldiers and officers awaiting discharge or postings are based and where injured soldiers return to full fitness after discharge from hospital before returning to full duty. Normally, a variety of regimental stores will also be kept at the depot. The regimental depot is not the same as the regimental headquarters (where the main officers' mess and certain central functions are based), though in practice the two will often be co-located in the same place.

In the British Army, regimental depots are permanent bases, and before modern amalgamations, were frequently located in the geographical area from which the regiment took its name.

The Indian Army equivalent is that of a regimental centre.

List of UK Infantry Regimental Depots in the 1880s

A list of barracks in Britain and Ireland, either designated or newly built to serve as localization depots for infantry regiments in the wake of the Cardwell Reforms of the 1870s and the Childers Reforms which followed. [1]

List of UK Cavalry Regimental Depots in the 1910s

A list of barracks in Britain and Ireland either designated or newly built to serve as depots for cavalry regiments. [2] [3]

Options for Change was a restructuring of the British Armed Forces in 1990 after the end of the Cold War.

The 1957 White Paper on Defence was a British white paper setting forth the perceived future of the British military. It had profound effects on all aspects of the defence industry but probably the most affected was the British aircraft industry. Duncan Sandys, the recently appointed Minister of Defence, produced the paper. 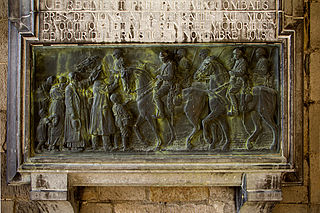 The British Expeditionary Force order of battle 1914, as originally despatched to France in August and September 1914, at the beginning of World War I. The British Army prior to World War I traced its origins to the increasing demands of imperial expansion together with inefficiencies highlighted during the Crimean War, which led to the Cardwell and Childers Reforms of the late 19th century. These gave the British Army its modern shape, and defined its regimental system. The Haldane Reforms of 1907, formally created an Expeditionary force and the Territorial Force.

A large regiment is a multi-battalion infantry formation of the British Army. First formed in the 1960s, large regiments are the result of the amalgamation of three or more existing single-battalion regiments, and perpetuate the traditions of each of the predecessor units.

This is the order of battle for the First Battle of Ypres fought from 19 October to 22 November 1914 as one of the main engagements of the First World War. It was fought between mixed British Expeditionary Force, French eighth army and armies of the German Empire in northern France and Flanders.

The following units of the British, French and German Empires fought in the First Battle of the Marne from 5–12 September 1914 on the Western Front of World War I.

In September 1939, the British Army was in process of expanded their anti-aircraft and mobile assets. Among these new changes was the formation of Anti-Aircraft Command which was formed on 1 April 1939, and the 1st Armoured Division formed in 1937. The list below will include the British Army units, colonial units, and those units which were in the process of formation. The units which were in the process of formation, cadre sized, or no units attached will be shown in italics. Notes will be included afterwards - (TA) indicated a Territorial Army Unit and (SR) Supplementary Reserve.

The following is a list of the notable Regimental for military regiments of the British Army. In addition, all regiments have additional pieces for slow marches, marches for mounted parades and pipe marches.