Regina Charlotta Theodora Lund, known professionally as Regina Lund, is a Swedish celebrity, award-winning Actress, Swedish Grammy nominated Artist, Singer-Songwriter, poet, writer, model, comedian and awarded painter. Regina Lund is a well-known household name in Sweden for film, television, radio, and theatre, as well as musicals and dramas on stage. Soon after acting school, she played Ophelia in Shakespeare’s Hamlet directed by the eldest son of Ingmar Bergman, Jan Bergman, which toured throughout Sweden. Regina Lund has been famous for constantly creating and working both in underground and mainstream productions.

Born to director Christian Lund (1943–2007) and actress Sonja Lund (f. 1942) in Vaasa, Finland, while her parents were working there in theatre. Regina grew up in Gävle, Sweden with her grandparents. [1] From the age of 10 to 18, Regina spent summers with family members in the United States and was an exchange student in Salt Lake City throughout her last year of high school. Her acting career began when she was 11.

Regina started her acting career in a non-speaking role in the television movie Den nya människan in 1979, directed by her father. [1] She made her big breakthrough as Laila Klang, a housewife in Tierp in the radio show Klang & Co in 1993 and as the secretary Mona in the television series Rederiet , a role she played between 1994–1995 and again in 2001. [2] In 1995 Lund was awarded the Guldmasken (in English: The Golden Mask) award for Best female lead in a musical for her role in I hetaste laget. [3]

In 2004, she was one of the hosts of Sommar , talking about her life and her career up to that point. [4] In 2007 she performed the song "Rainbow star" in Melodifestivalen 2007 but was eliminated in the first round in one of the semifinals. [5] She voiced the role of Gloria the Hippopotamus in the Swedish dubbed version of DreamWorks film Madagascar . [6]

Lund launched her acting career in the 1996 film Harry & Sonja, where she played a lifeguard at a swimming pool with Stellan Skarsgård. [7] She had the leading role in the 1999 thriller film Sjön . [8] After that she had more leading roles in Hassel – Förgöraren and had a part in Once in a Lifetime (Livet är en schlager), a comedy film about the Eurovision Song Contest. [9] In 2004 she appeared in the controversial film Kärlekens språk and she also starred in the film Göta kanal 2 – Kanalkampen . [10]

Lund made her musical debut on the 1997 Johan Norberg album 5 Hours 4 Months and a Day. [11] Norberg later appeared on Lund's debut solo album Unique and also her second music album Year Zero, released in 1997 and 2000 respectively. [11]

Lund made her stage debut in 1991 in Malmö as Curley's wife in John Steinbeck's Of Mice and Men . [12] She also had the part of Ophelia in Jan Bergman's Hamlet at Riksteatern in Stockholm in 1992. [12] The same year she acted as Beth in Sam Shepard's Den innersta lögnen (English: The Innermost Lie). [12] [13] The year after that she played a part in the musical I hetaste laget (English: Too Hot to Handle) at Cirkus, Stockholm. [12] [13]

In 1996, she acted as the character Lola in the play Blå Ängeln, and also had a role in Censorn in Gothenburg. [12]

Inga-Lill Kristina "Lili" Päivärinta is a Swedish singer and artist of Finnish ancestry. 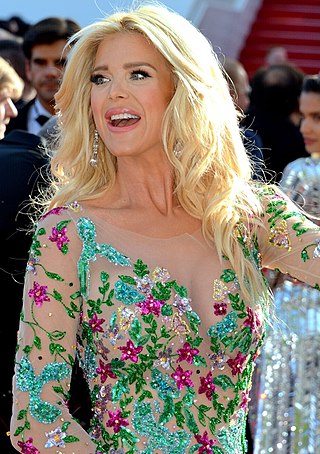 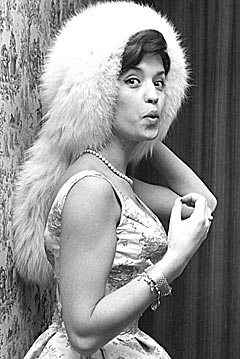 Barbro Margareta Svensson, known by her stage name Lill-Babs, was a Swedish singer, actress and television host. From the early 1950s until her death in 2018, she was one of Sweden's best-known and popular singers. She represented Sweden in the 1961 Eurovision Song Contest in Cannes with the song "April, april". She was also well known for the song "Är du kär i mej ännu Klas-Göran?".

Anna Jenny Charlotte Perrelli is a Swedish singer and television host. She was the winner of the 1999 Melodifestivalen and subsequently that year's Eurovision Song Contest with the song "Take Me to Your Heaven".

Linda Maria Elisabeth Thelenius is a Swedish glamour model and singer. Thelenius became known in Sweden when she was a housemate on Big Brother 2003; she has since released a book, been a party leader for the Unique Party and participated in several other reality shows. She has been married to Basic Element singer Peter Thelenius since 2010.

Mona Johannesson is a Swedish model. In Sweden, she is considered to be one of the top models in the country.

Carolina Gynning Nilsson is a Swedish glamour model, actor, author, jewelry designer and television presenter. She started her career as a model at age sixteen. She was a participant in the Swedish version of Big Brother in 2004 and emerged as the winner of that season. Gynning has since made a career as a television presenter on TV4 and Kanal5, and also as an artist and author of several books. Gynning has participated in several television shows after Big Brother such as I huvudet på Gynning and as a celebrity dancer in season one of Let's Dance.

Erik Tobias Karlsson, is a Swedish competitive dancer and choreographer. Karlsson has been dancing since the age of eight, and has been a professional dancer and choreographer mainly in ballroom dancing since 1999. He has participated in several seasons of the TV4 celebrity dance show Let's Dance, he won the third season of the show dancing with Tina Nordström. He has also danced along with Arja Saijonmaa, Anna Sahlin, Elisabet Höglund, Agneta Sjödin Tina Thörner, Camilla Henemark and latest in 2013 along with Anette Norberg. He has all in all participated in fourteen seasons of the celebrity dance show both in Sweden and the Danish version Vild med dans where he has danced with Sofie Stougaard, Zindy Laursen och Tina Lund. He has also danced in the Norwegian version Skal vi danse along with celebrities Triana Iglesiasa and Cecilie Skog.

Nour El Refai is a Swedish actress and comedian. She became known for her participation in the candid-camera show Raj Raj in 2007 and hosted Melodifestivalen 2014. El Refai has also appeared in several movies such as Kronjuvelerna and Johan Falk: Spelets regler.

Isabel Maria Adrian is a Swedish television personality, producer, author and model. She was a contestant in Expedition Robinson 2004 which was broadcast on TV3 and also made a centerfold in the men's magazine Café in the same year. Adrian has worked as a model. She is a well-known Swedish and international blogger and a clothing designer.

Görel Elisabeth Crona is a Swedish film director, actress and singer/songwriter. She had her first role in the Sveriges Television series Varuhuset. 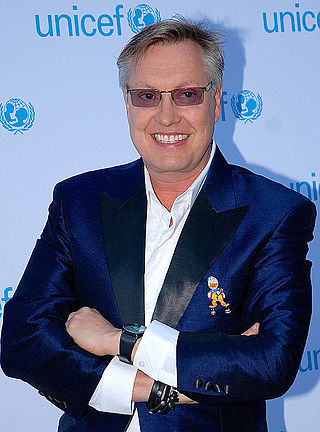 Silvana Imam is a Swedish rapper. She is known for her political songs protesting racism, homophobia, and the Sweden Democrats.

Anne-Li Ingvarsdotter Norberg was a Swedish actress. Norberg studied acting at Svenska Artist- och musikskolan and later as well at Kulturama. She graduated from stage school in Malmö in 1978 from the same class as actor Rolf Lassgård. During the 1970s and 1980s, she was in a relationship with actor Peter Haber and the couple had a child together actress Nina Haber.