In legal terminology, a rescript is a document that is issued not on the initiative of the author, but in response (it literally means 'written back') to a specific demand made by its addressee. It does not apply to more general legislation.

The word originated from the Roman imperial court, which often issued rescripts, in many cases prompted by its many governors and other officials. Some important early legal collections were composed entirely of rescripts, for instance the Codex Hermogenianus, published around AD 300. [1] The other main field of application is the papal Roman Curia, which adopted many Roman administrative terms and practices.

Rescripts may take various forms, from a formal document of an established type, such as a Papal Bull, to the forwarding of the demand with a simple mention by way of decision, something like "rejected" or "awarded", either to the party concerned or to the competent executive office to be carried out.

By analogy it is also applied to similar procedures in other contexts, such as the Ottoman, Chinese and Japanese imperial courts, or even prior to the Roman empire. Two well-known examples of Japanese Imperial rescripts were Emperor Hirohito's 1945 Imperial Rescript on the Termination of the War written in response to the Potsdam Declaration and his 1946 Humanity Declaration written in response to a request by General Douglas MacArthur.

Papal rescripts concern the granting of favours or the administration of justice under canon law. In Roman Catholicism rescripts are responses in writing by the pope or a Congregation of the Roman Curia to queries or petitions of individuals. [2]

The Massachusetts appellate courts issue rescripts to the lower courts. These are the equivalent of mandates (i.e. writs of mandamus) in federal appellate practice. [3] 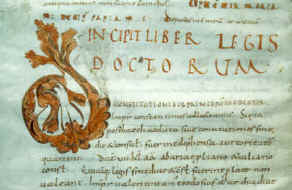 The Breviary of Alaric is a collection of Roman law, compiled by unknown writers and approved by referendary Anianus on the order of Alaric II, King of the Visigoths, with the advice of his bishops and nobles. It was promulgated on 2 February 506, the 22nd year of his reign. It applied, not to the Visigothic nobles under their own law, which had been formulated by Euric, but to the Hispano-Roman and Gallo-Roman population, living under Visigoth rule south of the Loire and, in Book 16, to the members of the Trinitarian Catholic Church.

The Codex Theodosianus was a compilation of the laws of the Roman Empire under the Christian emperors since 312. A commission was established by Emperor Theodosius II and his co-emperor Valentinian III on 26 March 429 and the compilation was published by a constitution of 15 February 438. It went into force in the eastern and western parts of the empire on 1 January 439. The original text of the codex is also found in the Breviary of Alaric, promulgated on 2 February 506.

Papal rescripts are responses of the pope or a Congregation of the Roman Curia, in writing, to queries or petitions of individuals. Some rescripts concern the granting of favours; others the administration of justice under canon law, e. g. the interpretation of a law, the appointment of a judge.

The Codex Gregorianus(Eng. Gregorian Code) is the title of a collection of constitutions of Roman emperors over a century and a half from the 130s to 290s AD. It is believed to have been produced around 291-4 but the exact date is unknown.

The Codex Hermogenianus is the title of a collection of constitutions of the Roman emperors of the first tetrarchy, mostly from the years 293–94. Most of the work is now lost. The work became a standard reference in late antiquity, until it was superseded by the Breviary of Alaric and the Codex Justinianeus.

A notarius is a public secretary who is appointed by competent authority to draw up official or authentic documents. In the Roman Catholic Church there have been apostolic notaries and even episcopal notaries. Documents drawn up by notarii are issued chiefly from the official administrative offices, the chanceries; secondly, from tribunals; lastly, others are drawn up at the request of individuals to authenticate their contracts or other acts.

Aurelius Hermogenianus, or Hermogenian, was an eminent Ancient Roman jurist and public servant of the age of Diocletian (245–311) and his fellow tetrarchs. 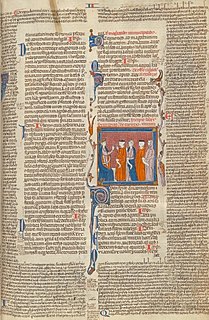 The Code of Justinian is one part of the Corpus Juris Civilis, the codification of Roman law ordered early in the 6th century AD by Justinian I, who was an Eastern Roman (Byzantine) emperor in Constantinople. Two other units, the Digest and the Institutes, were created during his reign. The fourth part, the Novellae Constitutiones, was compiled unofficially after his death but is now also thought of as part of the Corpus Juris Civilis.