Although some top-40 stations such as CKLW in Windsor, Ontario, made their mark by integrating a large amount of R&B and soul product into their predominantly pop playlists as early as 1967, such stations were still considered mainstream top 40 (a cycle that continues to dominate the current Top 40/CHR chart). It was not until the disco era of the late 1970s that such stations came to be considered as a format of their own as opposed to top-40 or soul. This development was largely spurred by the highly successful "worst-to-first" debut of the disco-based format on WKTU on 92.3 FM in New York City (now WNYL) in 1978. That station was classified as disco but actually played a blend of disco, dance music, and pop crossovers. At that time, stations playing strictly R&B tracks were known as "black" or "soul" stations. Stations such as WKTU came to be known as urban contemporary in the early 1980s as the disco era ended. In the 1980s, many urban contemporary stations began to spring up. Most of these leaned more towards R&B than dance music. These urban stations began sounding identical to so-called black stations and by 1985, stations that played strictly R&B product were all known as urban stations. Still, some urban outlets continued adding artists from outside the format onto their playlist. In most cases it was dance and rhythmic pop but in other cases they added a few rock songs. For example, Detroit's successful WDRQ included artists such as Cyndi Lauper, Culture Club and The Romantics in its urban format circa 1984.

But it wasn't until January 11, 1986, that KPWR in Los Angeles, a former struggling adult contemporary outlet, began to make its mark with this genre by adopting this approach. It would be known as crossover because of the musical mix and the avoidance of most rock at the time. Shortly afterward WQHT in New York adopted a similar crossover format and enjoyed similar ratings success. The new breed of crossover stations broke a number of popular artists, including Expose and The Cover Girls, but such artists couldn't reach either the Billboard Hot 100 or Hot Black Singles charts because their airplay was split between a handful of mainstream top-40 and black reporting stations. Billboard magazine thus debuted its first rhythmic top-40 airplay chart, the "Hot Crossover 30," in its February 28, 1987, issue. The Crossover panel's initial lineup of 18 stations included five exclusive Crossover reporters (KPWR, WQHT, WHQT Miami, WMYK Norfolk, and WOCQ Ocean City, MD) as well as 13 stations which also retained their prior CHR or black reporter status (among them WPOW Miami, WHRK Memphis, KMEL San Francisco, WHYT Detroit, WQUE New Orleans, WLUM Milwaukee. and XHRM Tijuana/San Diego). This was the first rhythmic top-40 airplay chart in any radio/records trade magazine. The chart's first number one song was "Lean on Me" by Club Nouveau. [1]

Today, Mega 97ONE in Santa Maria broadcasts such a format. [2]

For years since its inception, the rhythmic name has been a source of confusion among music trades, especially in both Billboard (which used the Rhythmic Top 40 title) and Radio & Records (which use the CHR/rhythmic title for their official charts). In August 2006 Billboard dropped both the "top 40" and "CHR" name from the rhythmic title after its sister publication Billboard Radio Monitor merged with Radio & Records to become the "New" R&R as part of their realignment of format categories. The move also ended confusion among the radio stations who report to their panels, which was modified by the end of 2006 with the inclusion of non-monitored reporters that were holdovers from the "(Old) R&R" days.

Still, over the years since its inception, the genre has grown and evolved in its position between traditional R&B outlets (who claim that the Rhythmic contemporary format does not target or serve the African-American community properly) and the traditional Top 40 hit stations. However, both R&B and mainstream top 40 outlets have taken cues from the Rhythmic contemporary format through the years; as of 2018, the cycle continues to dominate the current Top 40/CHR playlist as more Rhythmic and EDM songs are making their way onto the Mainstream chart.

An offshoot format of rhythmic contemporary is rhythmic adult contemporary, which targets an adult audience with a mix of current rhythmic hits and gold tracks (often termed "Throwbacks") which may date as far back as the 1980s or even the disco era of the 1970s. As with Rhythmic CHR, Rhythmic AC may vary depending on the market as to how much hip-hop and R&B product are included in the playlist; for example, the current WKTU (one of the late 1990s pioneers of the recent crop of Rhythmic AC stations) leans toward pop and dance, while WBQT in Boston is very hip-hop heavy. Internet-only station KVPN Digital 1 in San Francisco is an example of a Rhythmic AC that leans urban with a mix of r&b and deep soulful house vocals, known as an "Urban Chill" format.

WPGC-FM is a commercial radio station licensed to Morningside, Maryland and serving the Washington metropolitan area. It is owned by Audacy, Inc., and airs an urban contemporary format.

Contemporary hit radio is a radio format that is common in many countries that focuses on playing current and recurrent popular music as determined by the Top 40 music charts. There are several subcategories, dominantly focusing on rock, pop, or urban music. Used alone, CHR most often refers to the CHR-pop format. The term contemporary hit radio was coined in the early 1980s by Radio & Records magazine to designate Top 40 stations which continued to play hits from all musical genres as pop music splintered into Adult contemporary, Urban contemporary, Contemporary Christian and other formats.

WDRQ is a radio station licensed to Detroit, Michigan. Owned by Cumulus Media, it broadcasts a country music format. Its studios are located in the Fisher Building in New Center, while its transmitter is located at the intersection of 10 Mile and Greenfield Road in suburban Oak Park.

WKTU is a rhythmic adult contemporary formatted radio station licensed to Lake Success, New York, a suburb of New York City. WKTU is owned by iHeartMedia and broadcasts from studios in the former AT&T Building in the Tribeca neighborhood of Manhattan; its transmitter is located at the Empire State Building.

KPWR – branded as Power 106 – is a commercial radio station in Los Angeles, California, broadcasting to the Greater Los Angeles area. KPWR is owned and operated by Meruelo Group and airs a rhythmic contemporary format. KPWR's studios are based in the Los Angeles suburb of Burbank, and the transmitter is on Mount Wilson, shared with KCAL-TV and KRTH. Meruelo acquired KPWR from Emmis Communications for $82.75 million in May 2017, officially bringing the station under common ownership with KDAY, KDEY-FM, KWHY-TV, and KBEH on August 1, 2017.

KQKS is a Rhythmic Top 40 radio station, licensed to Lakewood, Colorado. It is owned by Audacy, Inc. and serves the Denver-Boulder metropolitan area. KQKS's current slogan is #1 For Today's Hottest Music, referring to a musical mix of R&B, hip hop and Rhythmic Pop hits.

KNTY is a commercial FM radio station in Sacramento, California. The station broadcasts a classic country radio format and is owned by Entravision Communications. Its radio studios and offices are located in North Sacramento. 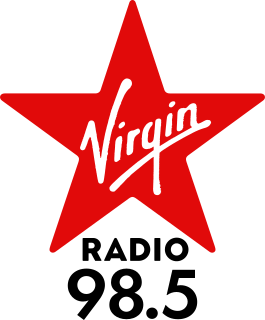 CIBK-FM is a Top 40/CHR radio station based in Calgary, Alberta, Canada. The Bell Media outlet operates at 98.5 FM with an effective radiated power of 100 kW from a transmitter located at the intersection of Old Banff Coach Road and 85 Street Southwest, and its studios located at CTV studios on Patina Rise.

WXKS-FM, branded as Kiss 108, is a commercial gold-leaning top 40/CHR radio station licensed to serve Medford, Massachusetts, and covering Greater Boston. Owned by iHeartMedia, the WXKS-FM studios are in Medford and the transmitter sits atop the Prudential Tower in Downtown Boston. 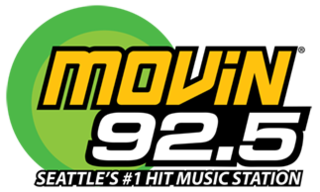 R&R was a weekly music trade publication that followed the radio industry and tracked the monitoring of current songs by format, station and audience cumes. The magazine was a sister publication to Billboard magazine and was mostly available through subscription to people who work in the radio industry and music chart enthusiasts, as well as various record stores and newsstands. On June 5, 2009, parent company AC Nielsen ceased operations on R&R just short of three years after acquiring the former independent trade periodical. When it ceased publication in 2009, R&R was the successor-in-interest of publications that traced their operations back to 1973.

KKFR is a commercial radio station that is licensed to Mayer, Arizona, and serves the Phoenix metropolitan area. The station is owned and operated by Riviera Broadcast Group and airs a rhythmic contemporary radio format. KKFR broadcasts at 98.3 MHz with an effective radiated power of 41 kW. The station's studios are located on 7th Street in Midtown Phoenix and its transmitter is located in Crown King, Arizona, producing a rimshot signal from 50 miles (80 km) northwest of Phoenix. KKFR is the flagship station of the nationally syndicated program Dana Cortez Show.

Dance radio is a format that consists of current and recent dance and electronic music.

Adult contemporary music (AC) is a form of radio-played popular music, ranging from 1960s vocal and 1970s soft rock music to predominantly ballad-heavy music of the present day, with varying degrees of easy listening, pop, soul, R&B, quiet storm and rock influence. Adult contemporary is generally a continuation of the easy listening and soft rock style that became popular in the 1960s and 1970s with some adjustments that reflect the evolution of pop/rock music.

American Dance Traxx was an American dance music countdown program that was syndicated by Westwood One and produced at KPWR/Los Angeles, California from March 1987 to December 1993. The three-hour program was distributed to more than 200 Top 40/CHR and Rhythmic stations internationally, including The Armed Forces Network.