Robert de Craon or Robert Burgundio (died 13 January 1147) was the second Grand Master of the Knights Templar from June 1136 until his death. He was a member of the Craon family, son of Renaud le Bourguignon and Ennoguen de Vitré. [1]

Robert was born around the turn of the 12th century, the youngest of the three sons of Renaud de Craon. [2] He settled in Aquitaine and was engaged to the daughter of the lord of Angoumois, but gave up his wedding and travelled to Palestine after learning of the foundation of the Templar Order by Hughes de Payens. He soon showed his military valour and his piety, and in 1136, after the death of Hughes, he was chosen as the new Grand Master. He proved to be a brilliant organizer and legislator, and turned the Order into a major force in the Crusader states. On March 29, 1139, Pope Innocent II issued the bull Omne Datum Optimum , which exempted the order from tithes and made them independent of any ecclesiastical jurisdiction. The Templars were also granted the habit of a red cross over a white tunic, which has since become the popular image of any crusader.

He was less fortunate as a military leader. As soon as he had been elected, he defeated Zengi, the emir of Aleppo and let his knights plunder the enemy camp; Zengi returned and destroyed the unorganized pillagers. Robert authorized the Spanish Templars to lead a naval expedition of about 70 ships against Lisbon, but this also ended in defeat. In 1140 the Templars resisted a numerically superior Turkish army at the Battle of Tecua. In 1143, after protracted negotiations between Raymond Berenguer IV (the Count of Barcelona and a Templar) the order's mission on the Iberian peninsula was defined. According to William of Tyre, Robert participated in the Council of Acre during the Second Crusade in 1148, but according to the Obituary of Reims, he died in January 1147, and was succeeded by Everard des Barres in April that year. Some authors give a date of death of 13 January 1147. [3] 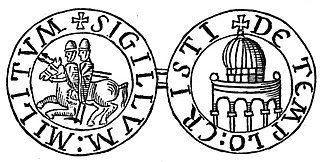 The Poor Fellow-Soldiers of Christ and of the Temple of Solomon, also known as the Order of Solomon's Temple, the Knights Templar or simply the Templars, were a Catholic military order founded in 1119, headquartered on the Temple Mount in Jerusalem through 1128 when they went to meet with Pope Honorius II. They were recognized in 1139 by the papal bull Omne datum optimum. The order was active until 1312 when it was perpetually suppressed by Pope Clement V by the bull Vox in excelso. 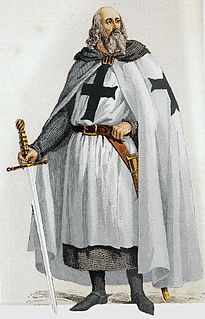 Jacques de Molay, also spelled "Molai", was the 23rd and last grand master of the Knights Templar, leading the order from 20 April 1292 until it was dissolved by order of Pope Clement V in 1312. Though little is known of his actual life and deeds except for his last years as Grand Master, he is one of the best known Templars. 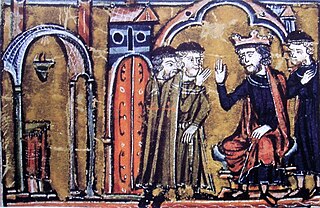 Hugues de Payens or Payns was the co-founder and first Grand Master of the Knights Templar. In association with Bernard of Clairvaux, he created the Latin Rule, the code of behavior for the Order.

Everard des Barres was the third Grand Master of the Knights Templar from 1147 to 1151.

Guillaume de Sonnac was Grand Master of the Knights Templar from 1247 to 1250. 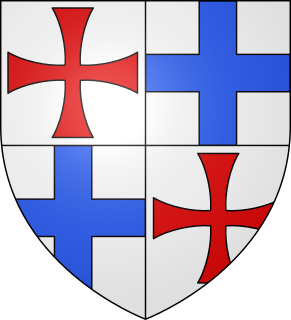 Gilbert Horal or Erail was the 12th Grand Master of the Knights Templar from 1193 to 1200.

Alain Demurger is a modern French historian, and a leading specialist of the history of the Knights Templar and the Crusades.

Yolanda of Lusignan or Yolande I de Lusignan, Countess of La Marche was a French noblewoman and peeress. In 1308, she succeeded her brother Guy I as suo jure Dame of Lusignan, of Couhé and of Peyrat, and suo jure Countess of La Marche, but not as Countess of Angoulême since after her brother's death the county was sold by her sisters, Joan and Isabelle, to King Philip IV and annexed to the French Crown. Yolanda was also the heiress of Fougères, which she succeeded to upon her mother's death sometime after 1273.

Laurent Dailliez was a French history doctor who graduated from Ecole pratique des hautes études. He was a researcher in medieval studies at the CNRS, a historian of the Crusades, and a specialist of the Knights Templar. Among other books, he wrote "Les Templiers". Dailliez was also the author of the article on the Templars in the leading French language encyclopedia, Encyclopedia Universalis.

Maurice II de Craon was Lord of Craon, Governor of Anjou and Maine under Henry II, a military figure and Anglo-Norman of the 12th century. Maurice II also possessed fiefs in England which he held courtesy of Henry II.

Renaud de Craon, was Lord of Craon and the son of Robert de Nevers and Blanche de Sablé. 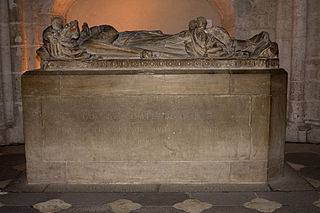 Guigues IV or Guy IV was the count of Forez, Auxerre and Tonnerre from 1203 and the count of Nevers from 1226. He was still a child when his father, Guigues III, died on the Fourth Crusade and he inherited Forez. His mother was Alix and his uncle, Renaud, archbishop of Lyon, acted as regent until he came of age in 1218.

Georges Tate was a French historian and professor of ancient history and archaeology at the Versailles Saint-Quentin-en-Yvelines University, Doctor of Arts and correspondent of the Académie des Inscriptions et Belles-Lettres. He was a specialist on the history of late antiquity and Early Middle Ages in Near East.

Robert III Clément was a French nobleman and courtier who served as tutor and senior Minister of State to Philip II of France. Two of his sons, Albéric and Henry I Clément, were appointed the first and third Marshals of France respectively.