Rocky Lee Hinds (born February 13, 1986) is an indoor football Quarterback for the Wichita Force of Champions Indoor Football (CIF). Rocky was the starting quarterback for the UNLV Rebels after transferring from the University of Southern California.

Hinds was a highly recruited [1] athlete who was a member of the 2004 graduating class of St. Bernard High School located in Los Angeles, California. He was considered in the Top Ten HS Quarterbacks in the nation. In his Senior season Rocky suffered a season-ending injury due to a torn anterior cruciate ligament (ACL) in the right knee. [2] Despite the injury he was still named a Super Prep All-American, PrepStar All-American, PrepStar Top 100 Dream Team, Tom Lemming Top 100, Super Prep All- Farwest, Prep All- West, Long Beach Press-Telegram Best in the West first team, Tacoma News Tribune Western 100 and Orange County Register Fab 15. [3]

After a visit to the campus in Januaryof his freshman year in high school, Rocky received a football scholarship to the University of Southern California. [6] In 2004, Hinds was redshirt as a freshman quarterback for Head Coach Pete Carroll. [7] Hinds became dissatisfied at USC when he was listed and 3rd on the depth chart behind Matt Leinart and John David Booty, and with the additional pressure of incoming freshman Mark Sanchez. [8] Hinds shopped around at other colleges looking to transfer to, most notably was Texas. [4] After Hinds decided to transfer to UNLV, accusations arrived that UNLV was tampering with the transfer, [4] but Hinds stated that, "There was no tampering." [4]

Hinds was part of the 2005 UNLV transfer class that included Eric Wright (USC), Tony Cade (Oklahoma) and Mil'Von James (UCLA). In the 2005 Season Rocky was redshirted as he transferred to UNLV. Due to NCAA transfer guidelines Hinds was able to practice with the team but could not be active. In 2006, he earned his first college athletic letter by playing in all 12 games (started 11). On his first game against Idaho State, Hinds threw for 322 yards (24 for 42) with a TD and a single rushing TD. The first TD pass was a 71-yard pass to Ryan Wolfe. At the end of the season, he passed for 2,148 yrs which is ranked 8th in school history. College Football News ranked Number 94th candidate for 2006 Heisman Trophy. In 2006, he was a member of the Rebel Leadership Committee.During the 2007 off-season, Rocky had right knee surgery to repair a partially torn ACL. Despite the injury he was named preseason second team All-MWC by Athlon and third team by Phil Steele's and was ranked as Number 27th best QB in college football. Sporting New listed Hinds as having the strongest arm in the Mountain West. Due to injuries Rocky did not play his senior year. [9]

On January 15, 2010 Rocky Hinds was signed by the Omaha Beef of the Indoor Football League. Later on, the Bloomington Extreme acquired the rights to Hinds. On April 12, Rocky made his indoor football debut by starting for the Extreme against the Chicago Slaughter. [10] In that game, Hinds completed 16 of 30 passes with 4 touchdowns and 1 interception, but the Express lost 50-43. He played for the Bloomington Edge for two years and lead the team to two playoff appearances. On October 21, 2011, the Allen Wranglers signed Hinds.

In 2013, Hinds signed with the Wichita Wild of the Champions Professional Indoor Football League (CPIFL). [11] During his first year with the Wild, Hinds finished the season with a quarterback rating of 102.18, completing 183 of 296 pass attempts, scoring 49 passing touchdowns and 8 rushing touchdowns for 2117 total yards. His play earned him several awards including Championship Game MVP, CPIFL Offensive Player of the Week (Week 3) and an honorable mention as CPIFL MVP of the year. [12] In 2014, Hinds lead the Wild to the best record in the CPIFL, while also winning the league's MVP award. [13]

In 2015, Hinds became a QB coach and pass game coordinator for Bethel College. [14]

Rocky is the son of Ernestine Frazier and Rocky Hinds, Sr. He has a brother, Brandon and a sister Belissa. At UNLV he majored in University Studies. 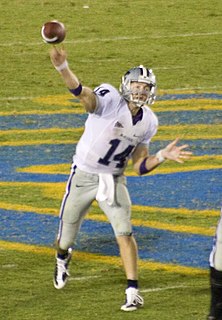 Carson Coffman is a former professional football quarterback. Coffman was the starting quarterback for the Kansas State Wildcats in 2009 and 2010. He took over the starting position after the departure of Josh Freeman, and again after the departure of Grant Gregory. He is the brother of Cameron Coffman, a 2011 high school quarterback prospect and Chase Coffman, former Missouri standout who formerly played tight end for the Seattle Seahawks and several other NFL teams. Carson is also the son of former Kansas State standout and NFL tight end Paul Coffman.

Dustin D. Bell is a former American football defensive back. He played collegiately for UTEP Miners at University of Texas at El Paso. Bell was considered a top shutdown corner coming out of Bakersfield Junior College.

Chris Dixon II is a professional indoor football player who is currently signed with the Sioux Falls Storm. He is also a former head coach. He ended his long playing career with a stint as quarterback for the Tampa Bay Storm of the Arena Football League (AFL) before returning to the Sioux Falls Storm (IFL) near the end of their 2019 season. Dixon attended Contra Costa College for two years before attending Humboldt State University, where he was an All-conference player.

Gary Nova is an American football quarterback. He played college football at Rutgers and was the Scarlet Knights starting quarterback from 2011 to 2014.

Max Austin Browne is an American football analyst and former quarterback. He played college football for the USC Trojans (2013–2016) and Pittsburgh Panthers (2017).

Shane Austin is an American football quarterback who is currently a free agent. He played college football at University of Hawai'i. Austin went undrafted in the 2012 NFL Draft and signed with the Everett Raptors of the Indoor Football League (IFL) after the draft. After starting the Raptors final games of the season, Austin was able to gain the attention of the Pittsburgh Power of the AFL. Austin was named the starting quarterback for the Power, but a broken hand caused him to miss two months of the season. Austin then was assigned to the Cleveland Gladiators where he was named the backup to Chris Dieker. With Dieker struggling for the Gladiators, Austin was given the opportunity to start and lead the Gladiators to a 14–1 record as a starter and a berth in ArenaBowl XXVII. The Gladiators lost to Arizona Rattlers in the ArenaBowl, but Austin was named Second Team All-Arena.

Donovan Wayne Porterie is an American football quarterback who is currently a free agent. He was signed by the Fairbanks Grizzlies as an undrafted free agent in 2011. He played college football at New Mexico.

Robert Lee Chapple is an American football quarterback for the Atlanta Havoc of the American Arena League (AAL). He signed with the Colorado Ice as an undrafted free agent in 2012. He played college football at the University of North Alabama after transferring out of Georgia Southern University.

Jarrett Pekelo Kahanuolaokalani "Anu" Solomon Jr. is a former American football quarterback for the Arizona Wildcats and Baylor Bears. He began his college football career at Arizona, before deciding to transfer after his senior year to Baylor. He decided to withdraw from Baylor on October 31, 2017 after suffering a concussion. 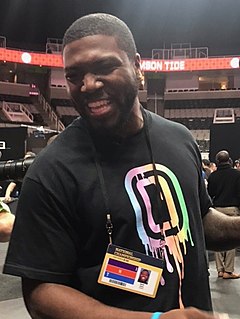 Malik Jamaal Zaire is a American media personality and former collegiate football quarterback. He currently works for the sports media company Overtime as on-air talent and as a producer, as well as a color commentator for college football games on the CBS Sports Network. He played college football at Notre Dame, before transferring to Florida as a graduate transfer.

Stephen Panasuk is an American football quarterback who is currently a free agent.

Kellen Louis Mond is an American football quarterback for the Minnesota Vikings of the National Football League (NFL). He played college football at Texas A&M, where he was a four-year starter and became one of three SEC quarterbacks to record over 9,000 career passing yards with 1,500 rushing yards. Mond was drafted by the Vikings in the third round of the 2021 NFL Draft.

Spencer Rattler is an American football quarterback for the Oklahoma Sooners. 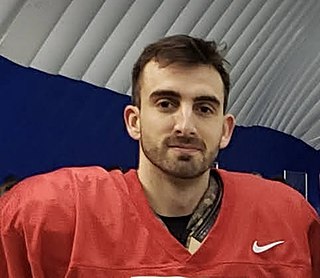 Kurt Palandech is an American football quarterback for the Nojima Sagamihara Rise in the Japanese X-League.