Rodolfo Othello Cruz Ilustre, Jr. (born October 10, 1987), known professionally as Rodjun Cruz, is a Filipino actor, dancer and singer. He is the brother of fellow actor and dancer Rayver Cruz.

After a year, Cruz along with 14 other celebrity contestants joined the second season of U Can Dance Version 2 , [2] where he met and started dating fellow Star Magic talent Dianne Medina. [3] Cruz with his dancing partner Lina Basas were named Grand Champion of U Can Dance Version 2 the following year, where he won the grand prize of 250,000 pesos. [4] He also won another 250,000 pesos from the "Merrygalo" segment of, the now defunct noontime variety show, Wowowee . [4] He made a guest appearance in the "Mambabarang" episode of Komiks Presents: Pedro Penduko at ang mga Engkantao in the same year.

Cruz left Lipgloss after three seasons in 2009. He had minor roles in the ABS-CBN shows Tayong Dalawa and May Bukas Pa . He also made guest appearances in Maynila and Midnight DJ .

In October 2017, Cruz announced his engagement to actress Dianne Medina after dating since July 23, 2007. [7] The couple married on December 21, 2019. [8] On April 2020, they announced that they were expecting their first child together.

Alberto Pineda Martinez is a Filipino actor, director, and producer.

Troy Montero is a Filipino actor.

Saint Francis of Assisi College (SFAC) is a system of private, Catholic-oriented but non-sectarian Philippine educational institutions, offering complete education from pre-school up to the graduate or masteral level of education. The main campus is situated in Las Piñas, Metro Manila.

John Wayne Sace is a Filipino character actor and dancer.

Raymond Oliver Cruz Ilustre, better known by his screen name Rayver Cruz, is a Filipino actor, dancer and singer. He is the younger brother of fellow actor and dancer Rodjun Cruz.

Joseph Cecil Marco is a Filipino actor, commercial model and singer who played the role of Santi Domingo in the GMA Network Philippine drama series La Vendetta and who is currently a Star Magic artist in the ABS-CBN, who appeared in Sabel, Honesto, Pasión de Amor and played Diego Torillo in Wildflower . Before this, he used to appear on several commercials like E-Aji Dip Snax, Downy and Head & Shoulders. On September 15, 2007, he was launched as part of the 15 new discoveries of GMA Artist Center, and was one of the first few who was quickly given a project via La Vendetta.

Kristoffer Martin Roach Dangculos is a Filipino actor. His career started when he joined the talent TV show Little Big Superstar where he was eliminated on the second week. He appeared in a couple of TV shows in ABS-CBN such as Prinsesa ng Banyera, Kung Fu Kids, Ligaw na Bulaklak and Pare Koy where he was known as Kristofer Dangculos.

Archie Alemania is a Filipino actor, host, comedian, and dancer.

Matanglawin was a weekly science-environmental educational show hosted by Kim Atienza, popularly known as Kuya Kim. Matanglawin tackling on various subjects. It is aired on ABS-CBN every Sunday mornings at 9:45 am, with replays on Wednesday mornings and daily on Knowledge Channel, Tuesdays at 2:00 pm and Wednesdays at 1:00 am on DZMM TeleRadyo and Wednesdays at 7:00 am on Jeepney TV. The show premiered on March 24, 2008 as a late-night program before it was moved to its current time schedule.

State of the Nation is a Philippine television news broadcasting show broadcast by GMA News TV and GTV. Originally anchored by Jessica Soho, it premiered on February 28, 2011. Maki Pulido and Atom Araullo currently serve as the anchors.

Maybelyn dela Cruz is a Filipina actress in movies and television shows in the Philippines. She was former child star and popularly known as the daughter of Nova Villa in Home Along Da Riles, a comedy series that aired on ABS-CBN. She was elected as city councilor in Dagupan City. 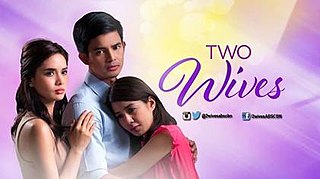 Two Wives is a 2014 Philippine television series remake based on the 2009 Korean drama of the same title. The series premiered on ABS-CBN's Primetime Bida evening block and worldwide on The Filipino Channel from October 13, 2014 to March 13, 2015, replacing Sana Bukas pa ang Kahapon.