STEIM (STudio for Electro Instrumental Music) is a center for research and development of new musical instruments in the electronic performing arts, located in Amsterdam, Netherlands. Electronic music in STEIM's context is always strongly related to the physical and direct actions of a musician. In this tradition, STEIM supports artists in residence such as composers and performers, but also multimedia and video artists to develop setups which allow for improvisation and performance with individually designed technology.

STEIM has existed since 1969. It was founded by Misha Mengelberg, Louis Andriessen, Peter Schat, Dick Raaymakers, Jan van Vlijmen, Reinbert de Leeuw, and Konrad Boehmer. This group of Dutch composers had fought for the reformation of Amsterdam's feudal music structures; they insisted on Bruno Maderna's appointment as musical director of the Concertgebouw Orchestra and enforced the first public fundings for experimental and improvised electronic music in the Netherlands. [1] They were offered a budget for their collective multimedia opera "Reconstruction" which was premiered in the Holland Festival in 1969. [2] The technology used in this opera was then taken to Amsterdam's Prinseneiland which was STEIM's first location. Soon, in 1971, the studio moved to the Groenburgwal in the city center, where there was more space for workshops and concerts. Since 1986, STEIM has been at the Achtergracht in the city center's southern area. Its premises include three studios, a concert hall, hard and software workshops, offices, and a guesthouse for artists in residence.

As a headline for most of STEIM's instrumental developments it can apply that "Touch is crucial in communicating with the new electronic performance art technologies". [6] As in traditional musical instruments, it is believed here that also in contemporary developments the physical touch of a musician contains essential aesthetic factors. These qualities tend to get lost in the non-realtime use of studio technology, in which the process of music production gets rather rational but bodily involved. The Touch philosophy — which can be considered as STEIM's interpretation of the widely used term interactivity — theoretically subsumes several stages of STEIM's developments, from the analogue touchable "Crackle" surfaces in the 1970s [7] to today's experimental Gestural MIDI Interfaces.

STEIM is a foundation, financially supported by the Dutch ministry of Culture. It invites international artists in residence of different musical and artistic styles and scenes. Aside from offering support in theoretic and practical development of contemporary musical instruments, STEIM also hosts in-house concerts, exhibitions and workshops. The work in progress of supported artists is presented in open studio events.

NATO.0+55+3d was an application software for realtime video and graphics, released by 0f0003 Maschinenkunst and the Netochka Nezvanova collective in 1999 for the classic Mac OS operating system.

A laser harp is an electronic musical user interface and laser lighting display. It projects several laser beams played by the musician by blocking them to produce sounds, visually reminiscent of a harp. The laser harp has been popularised by Jean-Michel Jarre, and has been a high-profile feature of almost all his concerts since 1981. The laser harp became famous in Asia by Japanese artist Susumu Hirasawa.

A kraakdoos or cracklebox is a custom-made instrument, in the form of a noise-making electronic device. It is a small box with six metal contacts on top, which generate various unusual sounds and tones when pressed by the performer's fingers. The human body becomes a part of the circuit and determines the range of sounds possible, thus different people shall generate different results. 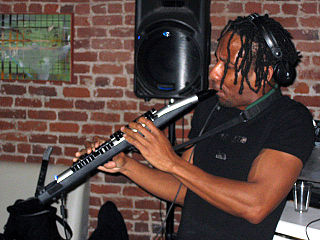 Buchla Thunder is one of many in the family of MIDI controllers consisting of tactile control surfaces, which are manipulated by hand.

The Buchla Lightning is the second in a series of MIDI controllers developed by Don Buchla. It consists of two independent hand-held electronic wands and a box unit that enable a player to initiate sounds and to manipulate those sounds spatially.

Michel Waisvisz was a Dutch composer, performer and inventor of experimental electronic musical instruments. He was the artistic director of STEIM in Amsterdam from 1981, where he collaborated with musicians and artists from all over the world.

I-CubeX comprises a system of sensors, actuators and interfaces that are configured by a personal computer. Using MIDI, Bluetooth or the Universal Serial Bus (USB) as the basis for all communication, the complexity is managed behind a variety of software tools, including an end-user configuration editor, Max (software) plugins, and a C++ Application Programming Interface (API), which allows applications to be developed in Mac OS X, Linux and Windows operating systems. 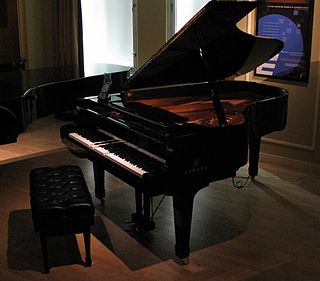 Disklavier is the brand name for a family of high-tech reproducing pianos made by Yamaha Corporation. The first Disklavier was introduced in the United States in 1987. 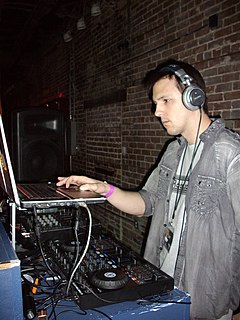 Lindsay Vickery is an Australian composer and performer.

The Miburi is a wearable musical instrument which was released commercially by the Yamaha Corporation’s Tokyo-based experimental division in 1994.

Laetitia Sonami, is a sound artist, performer, and composer of interactive electronic music who has been based in the San Francisco Bay area since 1978. She is known for her electronic compositions and performances with the ‘’Lady’s Glove’’, an instrument she developed for triggering and manipulating sound in live performance. Many of her compositions include live or sampled text. Sonami also creates sound installation work incorporating household objects embedded with mechanical and electronic components. Although some recordings of her works exist, Sonami generally eschews releasing recorded work.

Takuro Mizuta Lippit is a turn-tableist, curator and producer, who works in experimental electronic arts and improvised music.