The road passes through the communities of El Sobrante and Richmond. It begins at San Pablo Avenue and ends south of Highway 24 in Orinda, where it merges with Moraga Way en route to Moraga. The roadway travels along the San Pablo Canyon and San Pablo Reservoir along the former rail right-of-way of the California and Nevada Railroad. It passes by Kennedy Grove Regional Recreation Area. It has two lanes for the majority of its length but increases to 4 lanes when traveling through urban areas. [2]

State Route 1 (SR 1) is a major north–south state highway that runs along most of the Pacific coastline of the U.S. state of California. At a total of just over 656 miles (1,056 km), it is the longest state route in California, and the second-longest in the US after Montana Highway 200. SR 1 has several portions designated as either Pacific Coast Highway (PCH), Cabrillo Highway, Shoreline Highway, or Coast Highway. Its southern terminus is at Interstate 5 (I-5) near Dana Point in Orange County and its northern terminus is at U.S. Route 101 (US 101) near Leggett in Mendocino County. SR 1 also at times runs concurrently with US 101, most notably through a 54-mile (87 km) stretch in Ventura and Santa Barbara counties, and across the Golden Gate Bridge.

U.S. Route 40 or U.S. Highway 40 (US 40), also known as the Main Street of America, is a major east–west United States Highway traveling across the United States from the Mountain States to the Mid-Atlantic States. As with most routes whose numbers end in a zero, US 40 once traversed the entire United States. It is one of the first U.S. Highways created in 1926 and its original termini were in San Francisco, California and Atlantic City, New Jersey. In the western United States, US 40 was functionally replaced by Interstate 80 (I-80), resulting in the route being truncated multiple times. US 40 currently ends at a junction with I-80 in Silver Summit, Utah, just outside Salt Lake City. 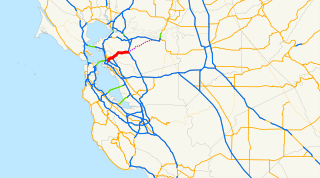 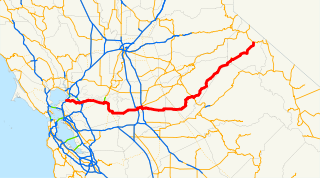 State Route 4 is a state highway in the U.S. state of California, routed from Interstate 80 in the San Francisco Bay Area to State Route 89 in the Sierra Nevada. It roughly parallels the Sacramento-San Joaquin River Delta, a popular area for boating and fishing, with a number of accesses to marinas and other attractions. After crossing the Central Valley, the highway ascends up the Sierra foothills. It passes through Ebbetts Pass and contains the Ebbetts Pass Scenic Byway, a National Scenic Byway.

State Route 33 is a primary state highway in the U.S. state of Virginia. The state highway runs 72.23 miles (116.24 km) from U.S. Route 33 and US 250 in Richmond, Virginia east to Chesapeake Boulevard in Stingray Point. SR 33 is a state-numbered eastward extension of US 33 that connects Richmond with West Point and the Middle Peninsula, one of three large peninsulas on the west side of the Chesapeake Bay in Virginia. The state highway is a major thoroughfare in the downtown and East End areas of Richmond. SR 33 serves a suburban area in eastern Henrico County before running concurrently with US 60, Interstate 64 (I-64), and SR 30 east toward West Point. The state highway heads from West Point through Saluda, east of which SR 33 serves as the main highway of Middlesex County.

Route 15, consisting of the contiguous segments of State Route 15 (SR 15) and Interstate 15 (I-15), is a major north–south state highway and Interstate Highway in the U.S. state of California, connecting San Bernardino, Riverside, and San Diego Counties. The route consists of the southernmost 289.24 miles (465.49 km) of I-15, which extends north through Nevada, Arizona, Utah, Idaho, and Montana to the Canada–US border. It is a major thoroughfare for traffic between San Diego and the Inland Empire, as well as between Southern California, Las Vegas, Nevada, and the Intermountain West. 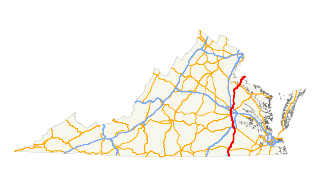 U.S. Route 301 is a part of the U.S. Highway System that runs from Sarasota, Florida to Biddles Corner, Delaware. In Virginia, the U.S. Highway runs 142.70 miles (229.65 km) from the North Carolina state line near Skippers north to the Maryland state line at the Potomac River near Dahlgren. US 301 forms the local complement to Interstate 95 (I-95) from Emporia to Petersburg. The U.S. Highway runs concurrently with US 1 between Petersburg and the state capital of Richmond, where the highways form one of the main north–south avenues. US 301 continues north concurrent with Virginia State Route 2 to Bowling Green, forming an eastern alternative to I-95 and US 1 north of Richmond. At Bowling Green, which is connected to I-95 by SR 207, US 301 becomes the primary highway connecting Richmond and the Northern Neck with Southern Maryland. US 301 was constructed in four main segments: as the original SR 24 and then US 17-1 south of Petersburg, as US 1 from Petersburg to Richmond, as SR 2 from Richmond to Bowling Green, and as part of SR 207 toward Dahlgren. US 301 replaced US 17–1 in the early 1930s and was extended from Petersburg north along its current course into Maryland when the Potomac River Bridge was completed in 1940.

State Route 24 is a primary state highway in the U.S. state of Virginia. The state highway runs 89.57 miles (144.15 km) from U.S. Route 221 and SR 116 in Roanoke east to US 60 in Mt. Rush. SR 24 connects Roanoke with several small communities in southern Bedford County and central Campbell County. The state highway also runs concurrently with US 460 west of Appomattox and passes through Appomattox Court House National Historical Park, which is the site of Robert E. Lee's final stand and surrender in the American Civil War.