The last of eight children, she was raised by her single mother, an educator, whom she fondly called Sisi Fadekemi, after her father died. [3] She began her musical career as a child in Ibadan. [4] She attended the International School Ibadan and the University of Lagos earning a bachelor's degree in Law. [5] [6]

"I believe as an individual, I have a social responsibility to make a difference any way I can" "

-Sasha speaking about giving back to the community

Sasha P gained success at a time when there were very few Nigerian women in Hip Hop music. Subsequently, her success helped pave the way for other female rappers and musicians in Nigerian hip hop. [7] She began musical collaborations and was signed on to eLDee's Trybe records. [8] [9] Sasha P has remained one of the most prominent female artists in Nigeria since 2001, especially after the successful release of her debut album First Lady under her record label STORM. She has been nominated for various awards in Nigeria and abroad. She won the 2009 "Best Female Artist" award in the UK at the Women in Entertainment Awards for her first single titled "Adara". She was also nominated in dual categories (Best Female Video and Best Cinematography) by the SoundCity Video Music Awards for her second single Only One in 2009.

In regard to community service, Sasha P said, "I believe as an individual, I have a social responsibility to make a difference any way I can", and this she has done consistently over the years. She was part of the "Save a street child" campaign in Lagos (January 2009) and the "Maternal Mortality" project (May 2009) [20] which aims to educate and help cater to the needs of young mothers who seek adequate medical care. She is also a motivational speaker [21] [22] and has worked with a campaign to end violence against women. [23] In 2012, Sasha P was the Olympic torch bearer for Nigeria. [24] 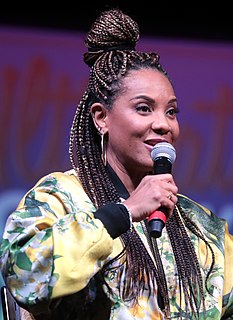 Lana Michele Moorer, better known by her stage name MC Lyte, is an American rapper, DJ, actress and entrepreneur. Considered one of the pioneers of female rap, Lyte first gained fame in the late 1980s, becoming the first solo female rapper to release a full album with 1988's critically acclaimed Lyte as a Rock. She released a total of eight solo studio albums and an EP with Almost September. 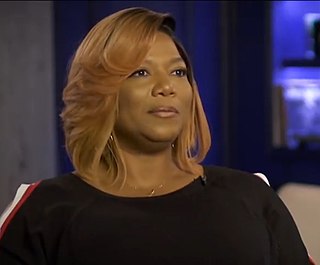 Dana Elaine Owens, known professionally as Queen Latifah, is an American rapper, actress, and singer. Born in Newark, New Jersey, she signed with Tommy Boy Records in 1989 and released her debut album All Hail the Queen on November 28, 1989, featuring the hit single "Ladies First". Nature of a Sista' (1991) was her second and final album with Tommy Boy Records. 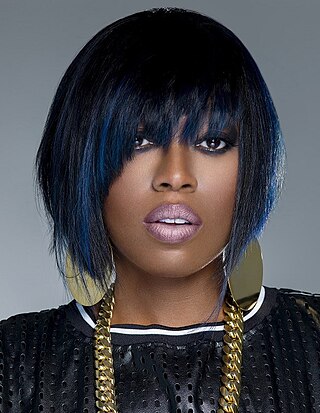 Melissa Arnette "Missy" Elliott is an American rapper, singer, songwriter, and record producer. She embarked on her music career with R&B girl group Sista in the early-mid 1990s and later became a member of the Swing Mob collective along with childhood friend and longtime collaborator Timbaland, with whom she worked on projects for American R&B acts Aaliyah, 702, Total, and SWV. Following several collaborations and guest appearances, she launched her solo career in 1997 with her debut album Supa Dupa Fly, which spawned the top 20 single "Sock It 2 Me". The album debuted at number three on the Billboard 200, the highest charting debut for a female rapper at the time. 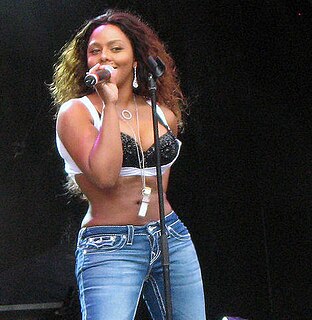 Kimberly Denise Jones, better known by her stage name Lil' Kim, is an American rapper and reality television personality. Born and raised in Brooklyn, New York City, she lived much of her adolescent life on the streets after being expelled from home. In her teens, Jones would freestyle rap, influenced by fellow female hip hop artists like MC Lyte and The Lady of Rage. In 1994, she was discovered by fellow rapper The Notorious B.I.G., who invited her to join his group Junior M.A.F.I.A.; their debut album, Conspiracy, generated two top 20 singles in the United States and was certified gold by the Recording Industry Association of America (RIAA).

Eve Jihan Cooper, known mononymously as Eve, is an American rapper, singer, actress, and television presenter. In 1999, she released her debut album, Let There Be Eve...Ruff Ryders' First Lady, which reached number-one on the Billboard 200, making her the third female rapper to accomplish this feat. Eve followed up with three subsequent albums, Scorpion (2001), Eve-Olution (2002), and Lip Lock (2013). She achieved chart success with her singles, "Let Me Blow Ya Mind", "What Ya Want ", "Who's That Girl", "Gangsta Lovin'", "Satisfaction", "Love Is Blind", and "Tambourine"; and also experienced success with collaborations, including "Rich Girl", "4 My People", "Caramel", "You Got Me", "Hot Boyz (remix)" and "Like This".

Munachi Abii is a Nigerian rapper / hip-hop artist, songwriter, television presenter model, and actress who performs under the name Muna. She is the winner of Most Beautiful Girl in Nigeria (MBGN) 2007. She is an Igbo lady who hails from Imo state. 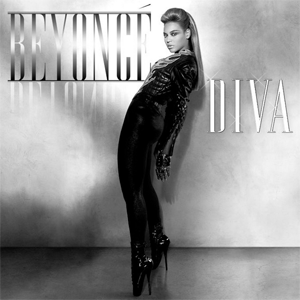 "Diva" is a song recorded by American singer and songwriter Beyoncé. The song was written and produced by Knowles, Shondrae "Bangladesh" Crawford, and Sean Garrett for the singer's third studio album I Am... Sasha Fierce (2008). It was released as the album's third overall single in the United States alongside the third international single "Halo". "Diva" is an R&B song, which is set in a hip hop groove, and carries a stuttering beat. Its lyrics deliver messages of independence and female empowerment. The song boasts a beat and a bassline similar to those of another Bangladesh 2008 production, "A Milli" by American rapper, Lil' Wayne; critics coined "Diva" as a "female companion" to the latter.

Weird MC is a Nigerian-British rapper, songwriter, and producer. Known for her English/Yoruba lyrics, Weird MC, who is also known as Shola Idowu and The Rappatainer, is one of Africa’s most popular female rappers, and one of the few Nigerian female artists associated with Afrobeat. 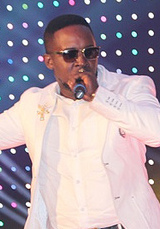 Jude Lemfani Abaga, better known as M.I Abaga, is a Nigerian rapper and record producer. He rose to prominence in 2006 when his song "Crowd Mentality" became popular in Jos, Nigeria. His debut studio album Talk About It was released in 2008. The LP was succeeded by MI 2: The Movie (2010). Four years after that, he released The Chairman as his third studio album. Abaga released the playlist Rendezvous in February 2018. In August of that year, he released his fourth studio album A Study On Self Worth: Yxng Dxnzl.

Elohor Eva Alordiah, better known as Eva Alordiah or simply Eva, is a Nigerian rapper, entertainer, make-up artist, fashion designer and entrepreneur. She is considered one of the best female rappers in Nigeria. Since her breakthrough into the Nigerian music industry, Eva has garnered several awards including one Nigeria Entertainment Award from 4 nominations, one Eloy Award, and one YEM award from 2 nominations. Her debut EP, titled The GIGO E.P, was released for free digital download on 20 November 2011. Eva is the owner of makeupByOrsela, a company that specializes in Makeup services. In November 2014, Eva released her self-titled second EP. Her debut studio album, 1960: The Album, was released in September 2016. ref>"Monthly event for the celebration, empowerment of women set to hold 1st edition". Pulse Nigeria. 17 August 2016. Retrieved 28 May 2020.

Oyenike Laoye, known professionally as Nikki Laoye, is a Nigerian recording artist, singer, humanitarian, songwriter, dancer and occasional actress, renowned for her musical expressions and stage performances. As a recording artist, Laoye's music has earned her several awards including The Headies Award in 2013 for Best Female Vocal Performance and the All African Music Awards (AFRIMA) in 2014 for Best Female Artiste in African Inspirational Music. She is also well known for the 2006 hit song Never felt this Way before, the 2013 dance single "1-2-3", the soulful ballad "Only You", which she remixed in 2016 featuring Seyi Shay and the love song Onyeuwaoma featuring Banky W.

Port Harcourt, a city of Rivers State located to the south of Nigeria, has a thriving music scene encompassing both native African and foreign-influenced genres. It plays host to numerous radio stations, prominent recording studios, such as the Street Rhymes Studios and other music institutions. As a state capital, Port Harcourt has of one of the liveliest club scenes in the country as well as music venues, bars and restaurants. As of 2015, hip hop, pop, highlife and reggae are most popular music styles among young people in the city.

Clarence Peters is a Nigerian music video director, filmmaker and cinematographer. He is the founder and CEO of Capital Dream Pictures, a production company that specialises in the realms of the performing arts, film and video. He is also the founder and CEO of Capital Hill Records, a record label home to Chidinma, Tha Suspect and Illbliss. He was ranked 2nd on Channel O's list of the Top 10 Most Visionary Music Video Directors. 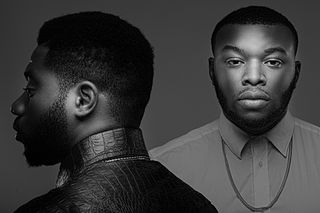 Legendury Beatz is a Nigerian record producing and songwriting duo, composed of siblings Uzezi Oniko and Okiemute Oniko. Their production style is deeply rooted in afrobeats as well as in several other genres, including hip hop, reggae fusion, moombahton and electro house.

Florence Ifeoluwa Otedola, professionally known as DJ Cuppy, or simply Cuppy, is a Nigerian disc jockey and producer. She is the daughter of Nigerian businessman Femi Otedola. She grew up in Lagos and moved to London at the age of 13. 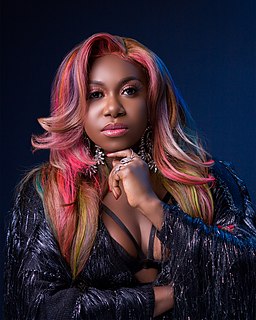 Niniola Apata, known professionally as Niniola, is a Nigerian singer and songwriter. She participated in the sixth season of Project Fame West Africa in 2013. After releasing her debut single "Ibadi", she was nominated for Most Promising Act to Watch at the 2015 Nigeria Entertainment Awards. 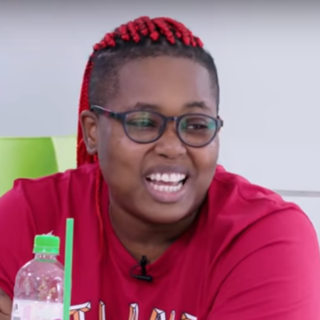 Olawunmi Okerayi, known by her stage name DJ Lambo, is a Nigerian disc jockey. Her song "Drank" was produced by Reinhard and received positive critical reviews and extensive airplay. She was signed to Loopy Music in 2013 before its merge with Chocolate City in 2015. She won DJ of the Year (Female) at the 2016 City People Entertainment Awards. Nigerian Entertainment Today (NET) listed her as one of top five Nigerian DJs to watch out for in 2015. 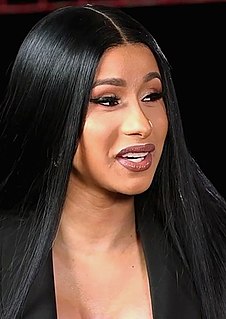 Belcalis Marlenis Almánzar Cephus, known professionally as Cardi B, is an American rapper and songwriter. She is known for her aggressive flow and candid lyrics. Born and raised in New York City, she became an Internet celebrity by achieving popularity on Vine and Instagram. From 2015 to 2017, she appeared as a regular cast member on the VH1 reality television series Love & Hip Hop: New York, which depicted her pursuit of her music aspirations; having released two mixtapes—Gangsta Bitch Music, Vol. 1 (2016) and Vol. 2 (2017), before signing with Atlantic Records in February 2017. Outside of music, she became the creative director of entertainment magazine Playboy in 2022.