Saturday Superstore is a British children's television series that aired on BBC1 from 2 October 1982 to 18 April 1987. [2] It was shown on Saturday mornings with presenters including Mike Read, Sarah Greene, Keith Chegwin, and John Craven. [3] The show was very similar to its predecessor Multi-Coloured Swap Shop , which had ended the previous October-March season following its presenter Noel Edmonds moving away from children's TV to present his prime-time Late Late Breakfast Show .

A regular spot on the show was their children's talent show "Search for a Superstar". The winner of the 1986 search were Claire and Friends, spawning the top-20 hit "It's 'Orrible Being in Love (When You're 8½)". In 1987, the contest was won by Juvenile Jazz, which included future OMD and occasional Stone Roses keyboard-player Nigel Ipinson.

For much of its run, Saturday Superstore retained the same famous phone-in number, 01-811-8055, as its predecessor.

Amongst its most memorable moments were the pop group Matt Bianco being verbally abused by a phone-in caller [4] and The Flying Pickets offering as a competition prize a tea-towel bearing the face of Karl Marx. Other notable guests included Wham!, who answered questions about their lives to callers and read out competition answers and winners.

The presenters released a single entitled "Two Left Feet", though it failed to chart. The theme tune, entitled "Down At The Superstore", was also released by The Assistants, consisting of Dave Edmunds, B. A. Robertson, Cheryl Baker, Junior and Suzi Quatro.

Then Prime Minister Margaret Thatcher appeared in one show in 1987 leading up to that year's election campaign, making the newspaper headlines when she was repeatedly asked by a girl "In the event of a nuclear war, where will you be?".

It Started With Swap Shop

Blankety Blank is a British comedy game show which started in 1979 and is still running today, albeit with some sizeable gaps.

Keith Chegwin was an English television presenter and actor, appearing in several children's entertainment shows in the 1970s and 1980s, including Multi-Coloured Swap Shop and Cheggers Plays Pop. 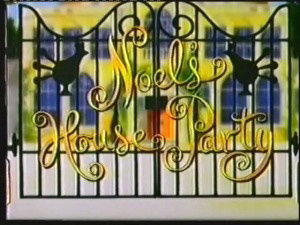 Noel's House Party is a BBC light entertainment series that was hosted by Noel Edmonds. Set in a large house in the fictional village of Crinkley Bottom, leading to much innuendo, it ran from 23 November 1991 to 26 March 2000 on BBC One, and for 8 series was broadcast live on Saturday evenings. The show, once described by a senior corporation executive as "the most important show on the BBC", was cancelled in February 1999 due to declining ratings, although two further compilation specials were shown in March 2000. In 2010, Noel's House Party was voted the best Saturday night TV show of all time.

Live & Kicking is a British children's television series that originally aired on BBC1 from 2 October 1993 to 15 September 2001. It was the replacement for Going Live!, and took many of its features from it, such as phone-ins, games, comedy, competitions and the showing of cartoons. Once Live & Kicking had become established in series two, it reached its height in popularity during series four, when it was presented by Zoe Ball and Jamie Theakston; their final edition won a BAFTA award. After this the programme's ratings dropped with the launch of SMTV Live on ITV and the show ended in 2001.

Janice Berry, known professionally by her first married name Janice Long, was an English broadcaster who was best known for her work in British music radio. In a career that spanned five decades, she became the first woman to have her own daily music show on BBC Radio 1. She also appeared on other BBC Radio stations, such as BBC Radio 2, BBC Radio London, BBC Radio WM, and BBC Radio 6 Music, and was a regular presenter on the television chart show Top of the Pops. 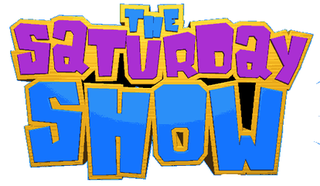 The Saturday Show is a British children's television series that aired on BBC One from 22 September 2001 to 3 September 2005. It was the replacement for Live & Kicking and contained a mix of audience participation, cartoons, games and gunge. The initial presenters were Dani Behr and Joe Mace, who were replaced in 2002 and by Fearne Cotton and Simon Grant. In 2004, Cotton left and Grant was joined by Angellica Bell and Jake Humphrey, who made up the final team of presenters until the programme finished in September 2005.

Multi-Coloured Swap Shop, more commonly known simply as Swap Shop, is a British children's television series that aired on BBC1 from 2 October 1976 to 27 March 1982. It was ground-breaking in many ways: by broadcasting on Saturday mornings, being live, being nearly three hours in length, and using the phone-in format extensively for the first time on TV.

Brian Alexander Robertson is a Scottish musician, actor, composer and songwriter. He had a string of hits in the late 1970s and early 1980s characterised by catchy pop tunes and jaunty humorous lyrics, including "Knocked It Off", "To Be or Not to Be" and "Bang Bang", a tongue-in-cheek commentary on famous historical and fictional couples. He wrote with Mike Rutherford of Genesis the Grammy-nominated and Ivor Novello Award-winning "The Living Years". It was a number one hit in the USA, Canada, Australia and Ireland and reached number 2 in his native UK. He has also written music for films and been a television presenter.

On the Waterfront is a British children's television series that aired on BBC1 from 23 April 1988 to 8 July 1989. The programme aired on Saturday mornings and filmed at Brunswick Dock, Liverpool. It consisted of comedy sketches interspersed with cartoons, competitions and music.

This is a list of British television related events from 1982.

UP2U is a British children's television series that aired on BBC1 from 16 July 1988 to 16 September 1989. The programme aired on Saturday mornings and was broadcast live from Manchester; the first series from a dedicated studio and the second from the programme's own production office.

Brown Sauce was a pop band, made up of presenters from the television programme, Multi-Coloured Swap Shop. These were Keith Chegwin, Maggie Philbin and Noel Edmonds. They formed for a one-off single in late 1981 called "I Wanna Be a Winner". After that became a hit, they released another in 1982, Spring Has Sprung, but failed to make an impact.

This is a timeline of the history of the broadcasting of children’s programmes on BBC Television.

This is a timeline of the history of the broadcasting of breakfast radio programmes on national stations in the United Kingdom.