A service club or service organization is a voluntary nonprofit organization where members meet regularly to perform charitable works either by direct hands-on efforts or by raising money for other organizations. A service club is defined firstly by its service mission and secondly its membership benefits, such as social occasions, networking, and personal growth opportunities that encourage involvement. [1] [ page needed ]

A service organization is not necessarily exclusive of ideological motives, although organizations with such defined motives are more likely to identify themselves through their association. Much like the historical religious organizations that formed the basis for many societal institutions, such as hospitals, service organizations perform many essential services for their community and other worthy causes. In the United States, some of these clubs usually also have a component club organization that is a tax exempt 501(c)(3) nonprofit organization.

Many of today's service clubs got their start as social clubs for business networking, but quickly evolved into organizations devoted more to service than to networking, although networking may still be the primary reason many members decided to join.

Historically, most service clubs consist of community-based groups that share the same name, goals, membership requirements, and meeting structure. Many of these clubs meet weekly, bi-weekly, or monthly on a recurring established day and time, commonly at a mealtime. Most of these clubs started with a single club in a single city, but then replicated themselves by organizing similar clubs in other communities. Many of the service club organizations have become worldwide movements, and have obtained official recognition by the United Nations and various governments as non-governmental organizations (NGO).

Service clubs in this article do not refer to the term "service club" used in the United Kingdom, Australia, and some other Commonwealth countries, in which those groups consist of clubs for members of "the services", a common expression for the military or uniformed forces. In the Americas, these types of clubs are commonly known as veterans' organizations or veterans' fraternal groups.

The world's first service club, the Rotary Club of Chicago, was formed in 1905 by Paul Harris, an attorney who wanted to create in a professional club with the same friendly spirit he had felt in the small towns of his youth. The Rotary name derived from the early practice of rotating meetings among members' offices.

A nonprofit organization (NPO), also known as a non-business entity, not-for-profit organization, or nonprofit institution, is an organization traditionally dedicated to furthering a particular social cause or advocating a shared point of view. In economic terms, it is an organization using the surplus of its revenues to further its objective, rather than distributing its income to the organization's shareholders, leaders, or members. Being public extensions of a nation's revenue department, nonprofits are tax-exempt or charitable, meaning they do not pay income tax on the money that they receive for their organization. They can operate in religious, scientific, research, or educational settings. 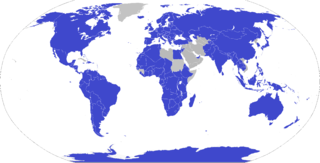 Civitan International, based in Birmingham, Alabama, is an association of community service clubs founded in 1917. The organization aims "to build good citizenship by providing a volunteer organization of clubs dedicated to serving individual and community needs with an emphasis on helping people with developmental disabilities." The organization includes 40,000 members in almost 1,000 clubs around the world. 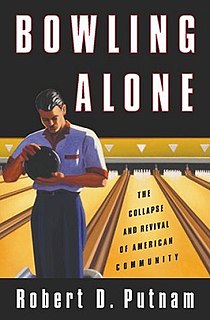 Bowling Alone: The Collapse and Revival of American Community is a 2000 nonfiction book by Robert D. Putnam. It was developed from his 1995 essay entitled "Bowling Alone: America's Declining Social Capital". Putnam surveys the decline of social capital in the United States since 1950. He has described the reduction in all the forms of in-person social intercourse upon which Americans used to found, educate, and enrich the fabric of their social lives. He argues that this undermines the active civil engagement which a strong democracy requires from its citizens.

Inner Wheel is an international women's organisation to create friendship, service and understanding. It has clubs in over 100 countries with over 100,000 members. It was founded in Manchester. 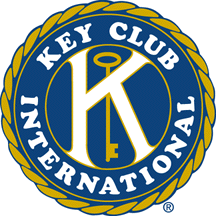 Rotaract originally began as a Rotary International youth program in 1968 at Charlotte North Rotary Club in Charlotte, North Carolina, United States, and has grown into a major organization of over 10,904 clubs spread around the world and over 203,000 members in 180 countries. It is a service, leadership, professional and community service organization for young men and women between the ages 18 and over. 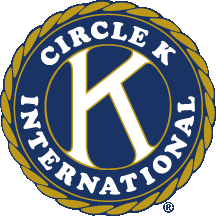 Circle K International (CKI) is an international collegiate service organization that is a service leadership program of Kiwanis International. It promotes service, leadership, and fellowship. It has over 13,000 members.

Nonprofit technology is the deliberative use of technology by nonprofit organizations to maximize potential in numerous areas, primarily in supporting the organization mission and meeting reporting requirements to funders and regulators.

Ruston High School is a four-year public high school located in the Lincoln Parish School District of Ruston, Louisiana, United States. The school has an enrollment of approximately 1200 students with 85 faculty members; the mascot is the bearcat named "Rusty,” by a class of 2009 student, Anna Ward. The school colors are red and white. Black students were first admitted in 1970. Ruston High School also serves as a memorial to the survivors of the Gulf War. 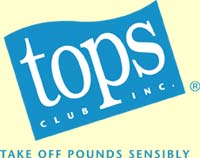 TOPS Club, Inc. is a non-profit charitable corporation based in Milwaukee, Wisconsin, United States, having members in chapters located worldwide, the majority of them in the United States and Canada. Its twofold objective is to sponsor research and foster support groups in human body weight control. Most members refer to the organization simply as "TOPS", an acronym for "Take Off Pounds Sensibly."

The Dictionary Project is a charitable organization based in Charleston, South Carolina, U.S.A., and was founded by Mary French in 1995 to provide personal copies of a dictionary for third grade students in the South Carolina public school system. It has grown into a national organization. To date, over 31 million dictionaries have been donated to children in the United States and internationally. It is funded through individual donations and by sponsors who implement the program in their local schools.

Altrusa International, Inc (Altrusa) is an international non-profit organization focused on community service. It was founded in Nashville, Tennessee in 1917 by Dr. Alfred Durham as a chain of national clubs for business and professional women.

Navy Weeks are designed to educate Americans on the importance of Naval service, understand the investment they make in their Navy and to increase awareness in cities which might not otherwise see the Navy at work on a regular basis. 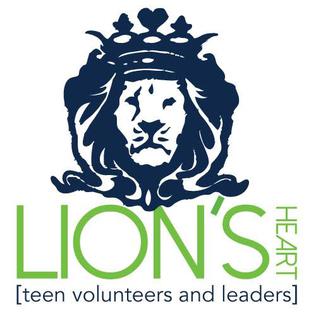 Lion's Heart is a national non-profit, teen-based volunteer program headquartered in California. The organization has several chapters in other states, such as Colorado, Connecticut, Florida, Georgia, Massachusetts, New Jersey, New York, Texas, and Wisconsin. It was founded in 2004 as a non-profit, non-fundraising group designed "to inspire teens to have a positive impact in their communities through leadership and participation in volunteering, providing needed resources for causes that ignite their passions."