Lisa-Marie Vizaniari is an Australian retired discus thrower and a retired professional boxer. She is openly lesbian. 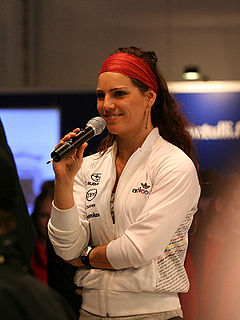 Eva Ulrika Birgitta Wahlström is a Finnish former professional boxer who competed from 2010 to February 2020. She held the WBC female super-featherweight title from 2015 to February 2020 and at regional level the European female super-featherweight title from 2012 to 2015. As an amateur she won a silver medal in the lightweight division at the 2004 and 2005 Women's European Championships, and represented Finland at the 2006 Women's World Championships. She is the most successful professional boxer from Finland to date, being the first and only Finn to have won a world title from one of the four major boxing sanctioning bodies.

Melissa St. Vil is an American professional boxer. She has challenged twice for world titles; the WBC super featherweight title in 2018 and the WBC lightweight title in March 2019.

Singdam Yokkao Saenchaigym, formerly known as Singdam Kiatmuu9, is a Muay Thai fighter from Thailand. He is a Lumpinee Stadium champion, and is known for his powerful right kicks and technical fighting.

Justin "The Destroyer" Juuko is a Ugandan amateur light flyweight and professional boxer who was active between the 1990s and the 2010s. In 1990, he won a gold medal at the Commonwealth Games in Auckland, New Zealand.

Birthony Katarina Nansen, better known as Baby Nansen, is a New Zealand professional boxer and kickboxer. Nansen's biggest fight of her career was against Melissa St. Vil for the vacant WBC Silver female super featherweight title on the Kali Reis vs. Maricela Cornejo undercard. Despite losing the bout, she fought very well and received a WBC ranking of 39th. Nansen has fought on a King in the Ring undercard.

New Zealand Professional Boxing Association (NZPBA) is one of the four governing bodies for the sport of professional boxing in New Zealand. NZPBA is a non-profit organisation.

Alrie Meleisea is a professional boxer and MMA fighter.

Pantera Guillermo Mosquera, known professionally as Guillermo "La Pantera" Mosquera, was a Professional boxer and a boxing trainer. During his professional boxing career, Mosquera has fought in 9 different countries including Colombia, Italy, New Zealand, Australia and more. Mosquera has won multiple credible titles including WBC International Super Lightweight Title, WBA – PABA Super Lightweight Title and the World Boxing Foundation World Super Lightweight Title. He started his professional career Columbia but eventually Mosquera moved to Italy in the mid to late 1980s. In the 90s, Mosquera moved to New Zealand where he eventually won the New Zealand national title in 2004. While in New Zealand, Mosquera started training Boxers. His most notable boxer Adrian Taihia while he was in The Contender Australia. Mosquera ended his career in Spain in 2012 where he lived in Valencia, Comunidad Valenciana. Mosquera Lived the remainder of his life in Italy where he owned a boxing gym. In 2017, after a long battle, Mosquera lost his life to cancer. He had his funeral at the church of the SS Annunziata in Via del Sole.