Below is a list of longest reigning welterweight champions in boxing measured by the individual's longest reign. Career total time as champion (for multiple time champions) does not apply.

Other sports to include a welterweight division include the following,

Benny Urquidez is an American kickboxer, martial arts choreographer and actor. Nicknamed "The Jet", Urquidez was a non-contact karate competitor who later pioneered full-contact fighting in the United States. He made the transition from point to full-contact karate in 1974, the year of its inception in the US, frequently fighting in bouts where the rules were ambiguous and contrasts in styles were dramatic. Urquidez is also known for once holding the rare achievement of six world titles in five different weight divisions, and remained largely undefeated in his 27-year career. His only loss came in a Muay Thai match which was shrouded in controversy, as Urquidez had only agreed to a no-decision exhibition, a clause which was ignored when the fight had ended.

The International Kickboxing Federation (IKF) is one of the oldest and the largest professional sanctioning organizations of kickboxing and Muay Thai in the world and is based in the United States. The IKF sanctions and regulates all aspects of these sports from Semi Contact to Full Contact in both Amateur and Professional levels. The IKF World Headquarters located in Newcastle, California, USA oversees over 2,000 IKF events a year around the world.

Curtis Bush is an American world champion kickboxer who competed in the welterweight, super-welterweight, light-middleweight and middleweight divisions. A tall Southpaw possessing dangerous spinning back kicks and spinning back fists, Bush competed entirely under full contact rules and was a two-time Virginia state champion as an amateur before turning professional in 1983. After knocking out Robert Visitacion to become the North American welterweight champion in 1987, he went on to win five world titles in four weight classes and retired from competition in 1999.

Dale Cook is an American former kickboxer who competed in the middleweight, super middleweight, light heavyweight and cruiserweight divisions. With a background in karate and taekwondo, Cook debuted professionally in 1977 and spent the early part of his career as a full contact rules fighter, winning the PKA World Middleweight Championship. In the 1980s, he began fighting under Oriental and Muay Thai rules and took two world titles under the WKA banner. A short stint in shoot boxing towards the end of his career in the mid-1990s resulted in another world title in that discipline. 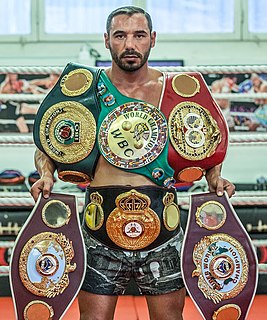 Shemsi Beqiri is a Swiss kickboxer who competes in the middleweight division. Born in Yugoslavia, Beqiri relocated to Switzerland as a child and started practicing kickboxing and Muay Thai at sixteen years old. He began his career fighting as a lightweight and welterweight before eventually moving up to middleweight, winning a host of national, European and world titles at the various weight classes to establish himself as a veteran in the sport at a young age.

Fabio Pinca is an Italian-French Muay Thai kickboxer and mixed martial artist. Pinca is currently signed to ONE Championship. In 2010, Pinca became the first winner of the annual Thai Fight tournament.

Besim Kabashi was a Kosovar-German kickboxer who competed in the light heavyweight, cruiserweight and heavyweight divisions. He began his training in Germany after emigrating from Kosovo and initially competed as a -79 kg/174 lb fighter before moving up through the weight classes until eventually reaching heavyweight. After stints as a German and European champion, Kabashi won the WKA World Heavyweight Muay Thai title in 2008 which he held until his death in December 2011.

Alexis Rufus is an English Muay Thai kickboxer who competes in the bantamweight and featherweight divisions. Having turned professional in 2005, Rufus is a two-time European and five-time world champion.

Chantal Ughi is an Italian American female kick boxer, actress and multiple Muay Thai champion. Chantal won her first Muay World title the WPMF against Carly Giumulli on Dec. 5th 2008, during the King's Birthday celebration in Bangkok, Thailand, in front of 200.000 people. Chantal Ughi has fought Miriam Nakamoto for the WBC, Julie Kitchen for her WPMF title defense, Stephanie Ielö Page for the WMA and Eileen Forrest for the ISKA titles.