The 1860 fight between Nobby Clark and Jim Elliott is sometimes called the first featherweight championship. However, the division only gained wide acceptance in 1889 after the Ike Weir–Frank Murphy fight (one of the most famous fights of all time).

Below is a list of longest reigning featherweight champions in boxing measured by the individual's longest reign. Career total time as champion (for multiple time champions) does not apply.

In kickboxing, a featherweight fighter generally weighs between 55 and 59 kg (121 and 130 lb). However, some governing bodies have slightly different classes. For example, the International Kickboxing Federation (IKF) featherweight division (professional and amateur) is between 122.1–127 lb (55.4–57.6 kg).

In Bellator Kickboxing promotion, a featherweight division is up to 66 kg (146 lb).

These tables were last updated in August 2020.

George Henry "K.O." Chaney was a hard punching featherweight and lightweight who fought from 1910 to 1928. Known as the "Knockout King of Fistiana", Chaney was born in Baltimore, Maryland to Irish-American parents. Boxing Illustrated ranked him #4 all-time in terms of pound for pound punchers, while the Bleacher Report named him the #14 greatest southpaw in boxing history. He was inducted into the International Boxing Hall of Fame in 2014.

Troy Glenn Dorsey is an American former boxer and kickboxer who competed in the bantamweight, featherweight and lightweight divisions. Known predominantly for his indominatable spirit, amazing physical endurance and a propensity to hammer an opponent with a withering constant barrage of punches, Dorsey began his martial arts training in karate and taekwondo at the age of ten before later making the switch to full contact kickboxing where he was a three-time world champion as well as a gold medalist the WAKO Amateur World Championships in both 1985 (London) and 1987 (Munich). He began dedicating himself to boxing in 1989 and would win the IBF World Featherweight Championship and IBO World Super Featherweight Championship before retiring in 1998.

John Patrick "Johnny" Kilbane was a featherweight boxer in the early part of the 20th century. He held the World Featherweight title from 1912 to 1923, the longest period in the division's history, having defended the title against four contenders during the reign. Statistical boxing website BoxRec lists Kilbane as the #2 ranked featherweight of all-time, while The Ring Magazine founder Nat Fleischer placed him at #5. The International Boxing Research Organization rates Kilbane as the 8th best featherweight ever. He was inducted into the Ring Magazine Hall of Fame in 1960 and the International Boxing Hall of Fame in 1995.

Orlando Salido Rivera is a Mexican professional boxer. He is a multiple-time former world champion in two weight classes, having held the IBF featherweight title in 2010; the WBO featherweight title twice between 2011 and 2014; and the interim WBO junior lightweight title from 2014 to 2015. 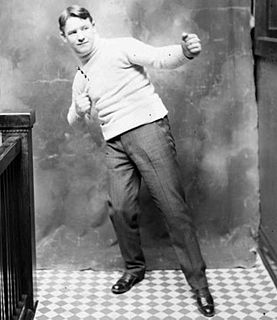 Frank "Frankie" Fleming was a Canadian featherweight boxer active from 1910 to 1922. During his career he held the distinction of being the Canadian Boxing Federation Featherweight Champion. He is best known for beating all-time great Benny Leonard twice, being the only fighter to do so. He also faced Hall of Famers Johnny Kilbane, Johnny Dundee, and Freddie Welsh in defeat; challenging for the latter's World Featherweight Title. Statistical boxing website BoxRec rates Fleming as the 11th best Canadian boxer ever across all weight divisions.