Boxing at the 1984 Summer Olympics

Boxing at the 1984 Summer Olympics took place in the Memorial Sports Arena in Los Angeles , California , United States . The boxing schedule began on July 29 and ended on August 11. Twelve boxing events were contested with the participation of 354 fighters from 81 countries. [1] A Soviet-led boycott resulted in the withdrawals of the Soviet Union, Cuba, East Germany, Bulgaria and other Eastern Bloc nations from boxing competitions.

At the 1980 Summer Olympics, that was impacted by an American-led boycott, Cuban boxers won 10 medals, with 6 of them being gold, and had again been expected to do well. [2] However, the nation withdrew from the games following the announcement of the Soviet boycott. [3] Teófilo Stevenson, who was going to try for his fourth Olympic gold medal before the boycott was officially announced, [2] had previously defeated Tyrell Biggs twice (one by knockout) and Hermenegildo Báez had previously defeated Henry Tillman. Soviet Alexander Yagubkin defeated both Biggs and Tillman during the USA–USSR duals. Cuban and Soviet boxers, however, were more seasoned than their American counterparts. [4] While US athletes typically turned pro after the Olympics, while still in their early twenties, Cubans and the Soviets were not allowed to do so and stayed on in the amateurs, participating in multiple Olympic cycles. [5]

Evander Holyfield was controversially disqualified in the Light heavyweight semifinals for punching New Zealand boxer Kevin Barry after what seemed to be a stop. However, replay shows that the referee stopped the bout after his punches. [6] [7] Under IABA health regulation Barry was not allowed to box for 28 days, so he scratched from the final, giving Yugoslav boxer Anton Josipović the uncontested gold medal. [7] During the medal ceremony, Josipović pulled bronze medalist Holyfield onto the highest step of the podium and raised his hand, acknowledging that Evander deserved to compete in the final. [8] 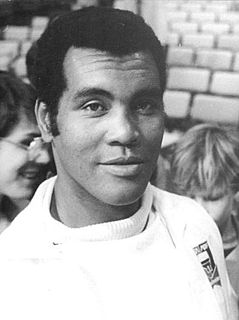 Teófilo Stevenson Lawrence was a Cuban amateur boxer, who competed from 1966 to 1986. He won the Val Barker Trophy (1972) and was honoured with the Olympic Order (1987). Stevenson is one of only three boxers to win three Olympic gold medals, alongside Hungarian László Papp and fellow Cuban Félix Savón. He might have become a five-time Olympic champion had the Cuban authorities allowed the Cuban boxing team to participate in the 1984 and 1988 Summer Olympics, which they boycotted.> 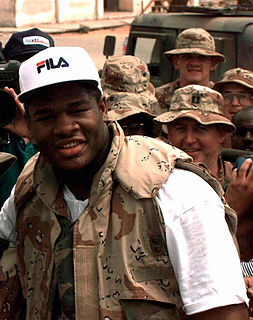 Riddick Lamont Bowe is a retired American professional boxer who competed between 1989 and 2008. He reigned as the undisputed world heavyweight champion in 1992, and as an amateur he won a silver medal in the super heavyweight division at the 1988 Summer Olympics. 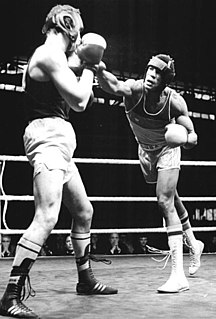 Félix Savón Fabre is a retired Cuban amateur boxer, who competed from 1980 to 2000. Considered one of the all-time greatest amateur boxers, he became three-time Olympic gold medalist, and the World Champion six times in a row, all in the heavyweight division. In 1988, when he was favored by many to win the gold medal at the 1988 Summer Olympics, Cuban government boycotted the event. Savón is particularly known for having rejected numerous multimillion-dollar offers to defect, leave Cuba permanently to fight Mike Tyson as a professional.

Larry Ali Donald is an American former professional boxer. As an amateur he won a bronze medal in the super heavyweight division at the 1991 World Championships and won a gold medal at the 1992 World Championship Challenge and becoming amateur world Super heavyweight champion going into the 1992 Olympic Games represented the United States at the 1992 Olympics. During his professional career, he defeated the likes of Evander Holyfield, Jeremy Williams, Bert Cooper, Tim Witherspoon, and Ross Puritty. 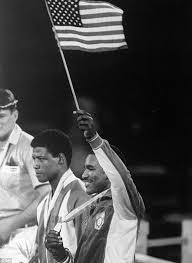 Mustapha Moussa is an Algerian former boxer who fought in the light heavyweight division. He won the first-ever Olympic medal for Algeria, winning a bronze at the 1984 Summer Olympics in Los Angeles. He shared the podium with American boxer Evander Holyfield.

Alex Stewart was a professional boxer. He represented Jamaica at the 1984 Olympics, and won a bronze medal in the heavyweight division at the 1983 Pan American Games. During his professional career, he fought world champions Mike Tyson, Evander Holyfield, George Foreman, Oleg Maskaev, and Michael Moorer. 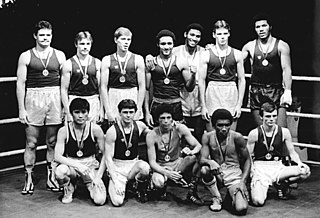 Pablo Romero is a retired Cuban amateur boxer best known for winning two light-heavyweight gold medals at World Championships. The dominant light heavyweight boxer of the eighties he never participated in Olympics as his country boycotted both the 1984 and 1988 games. He was a tall boxer-puncher with a strong jab.

Ricky Womack was a professional boxer from the United States. Known primarily for his amateur career, during which he already earned his nickname "Wonderful," coming to attention of Howard Cosell, who predicted his bright future as a most likely U.S. Olympic Team light heavyweight for the 1984 Olympics, and a successful professional career afterwards, but both predictions proved unfulfilled, as Womack lost the Olympic qualifiers to Evander Holyfield, and his up-and-coming professional career crumbled after a criminal conviction.

Mike Tyson vs. Henry Tillman, billed as "The Road Back", was a professional boxing match contested on June 16, 1990.

The men's light heavyweight event was part of the boxing programme at the 1984 Summer Olympics. The weight class allowed boxers of up to 81 kilograms to compete. The competition was held from 30 July to 11 August 1984. 24 boxers from 24 nations competed.