Swimming at the 1984 Summer Olympics

The swimming competitions of the 1984 Summer Olympics were held at the McDonald's Olympic Swim Stadium, located on the University of Southern California (USC) campus. There were a total of 494 participants from 67 countries competing. [1]

This was the first Olympic games at which only two swimmers per country, per event, were permitted; previously, three swimmers were allowed and many countries would sweep the medal stand. In addition, the Women’s 200 Meters Medley returned to the program after being absent in 1976 and 1980, after a proposal by the United States Olympic & Paralympic Committee (USOC). [2] [3] [4] [5]

*Swimmers who participated in the heats only and received medals.

The 1984 Summer Olympics was an international multi-sport event held from July 28 to August 12, 1984, mainly in Los Angeles, California, United States. It marked the second time that Los Angeles had hosted the Games, the first being in 1932. California was the home state of the incumbent U.S. President, Ronald Reagan, who officially opened the Games. The emblem of the 1984 Games, known as "Stars in Motion", featured red, white and blue stars arranged horizontally and struck through with alternating streaks, and the official mascot was Sam the Olympic Eagle. These were the first Summer Olympic Games under the IOC presidency of Juan Antonio Samaranch. 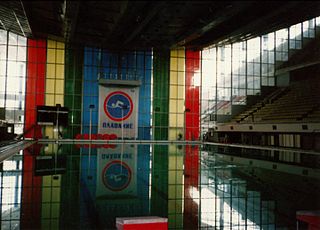 Swimming as usual was one of the three aquatics disciplines at the 1980 Summer Olympics—the other two being Water Polo and Diving. It was held in the Swimming Pool of the Olimpiysky Sports Complex between July 20 and July 27. There was a total of 333 participants from 41 countries competing.

Equatorial Guinea participated in the 2000 Summer Olympics in Sydney, Australia, which was held from 15 September to 1 October 2000. The country's participation in Sydney marked its fifth appearance in the Summer Olympics since its debut at the 1984 Summer Olympics. The delegation included one middle-distance runner, one short-distance sprinter and two swimmers: José Luis Ebatela Nvo, Mari Paz Mosanga Motanga, Eric Moussambani and Paula Barila Bolopa respectively. All four athletes qualified for the games through wildcard places. Moussambani was selected as the flag bearer for the opening ceremony. The four athletes were unable to advance beyond the first rounds of their respective events, with Moussambani and Bolopa attracting attention for their poor performances, but were applauded by the crowds.

Djibouti took part in the 2000 Summer Olympics, which were held in Sydney, Australia from 15 September to 1 October. The country's participation at Sydney marked its fifth appearance in the Summer Olympics since its debut at the 1984 Summer Games in Los Angeles, United States. The delegation included two track and field athletes; Omar Daher Gadid in the men's marathon and Roda Ali Wais in the women's 800 metres. Gadid failed to finish the marathon, while Wais did not progress past the first round of her event.

Peter Maxwell Evans is an Australian breaststroke swimmer of the 1980s who won four Olympic medals, including a gold in the 4×100 m medley relay at the 1980 Moscow Olympics as part of the Quietly Confident Quartet. He also won consecutive bronze medals in the 100 m breaststroke at the 1980 Olympics and the 1984 Los Angeles Olympics.

The men's 100 metre freestyle event at the 1984 Summer Olympics was held in the McDonald's Olympic Swim Stadium in Los Angeles, California, on July 31, 1984. There were 68 competitors from 45 nations. Nations were limited to two swimmers each, down from three in prior Games. The event was won by Rowdy Gaines of the United States, the nation's third victory in four Games—with only the boycotted 1980 Olympics missing. Overall, it was the 11th victory for an American in the men's 100 metre freestyle, most of any nation. Mark Stockwell of Australia took silver. Swedish swimmer Per Johansson repeated as bronze medalist, only the seventh man to earn multiple medals in the event.

The final of the women's 400 metre freestyle event at the 1984 Summer Olympics was held in the McDonald's Olympic Swim Stadium in Los Angeles, California, on July 31, 1984.

The final of the women's 800 metre freestyle event at the 1984 Summer Olympics was held at the McDonald's Olympic Swim Stadium in Los Angeles, California, on August 3, 1984.

Swaziland sent a delegation to compete at the 2008 Summer Olympics held in Beijing, People's Republic of China from August 8–24, 2008. This was the Kingdom's eighth appearance at a Summer Olympic Games. The Swazi delegation to Beijing consisted of four competitors, two track and field athletes; Isaiah Msibi and Temalangeni Dlamini; and two swimmers; Luke Hall and Senele Dlamini. None of the four advanced beyond the first round of their respective events.

Cynthia Lee Woodhead, commonly known by her family nickname "Sippy", is an American former competition swimmer, world champion, Olympic medalist, and former world record-holder. She won three gold medals at the 1978 World Championships, when she was only 14 years old, and set seven world records during her career.

John Clifford Moffet is an American former swimmer who competed at the 1984 Summer Olympics in Los Angeles, California, having also been selected for the 1980 Summer Olympics that were ultimately boycotted by the United States. At the 1984 Olympics, he finished fifth in the final of the men's 100-meter breaststroke event. In 1985 he won three gold medals at both the Pan Pacific Swimming Championships and the Summer Universiade. In 1986, he concluded his collegiate career, after winning five NCAA Division 1 Championships, and moved into the entertainment industry. As a television producer he is a three-time Primetime Emmy Award winner for The Amazing Race.

Jill Ann Sterkel is an American former competition swimmer, Olympic champion, former world record-holder, and water polo player. Sterkel won four medals in three Olympic Games spanning twelve years. She was the women's head coach of the Texas Longhorns swimming and diving team at the University of Texas at Austin from 1992 to 2007.

Tonga participated in the 2012 Summer Olympics in London, United Kingdom, which were held from 27 July to 12 August 2012. The country's participation in London marked its eighth appearance in the Summer Olympics since its debut at the 1984 Summer Olympics. The delegation included three competitors: two in athletics, Joseph Andy Lui and ʻAna Poʻuhila, along with one short distance swimmer Amini Fonua. The latter entry was Tonga's first appearance in Olympic swimming competition. Lui and Fonua qualified through wildcard places while Po'uhila made the games by meeting qualification standards. Fonua was selected as the flag bearer for the opening ceremony while Lui held it at the closing ceremony. Lui and Fonua failed to progress farther than the preliminary round of their respective events while Po'uhila finished 29th in the heat stage of the women's shot put contest.

Robin Leamy is an American former competition swimmer of Samoan descent who participated in the 1984 Summer Olympics in Los Angeles, California. He earned a gold medal by swimming for the winning U.S. team in the preliminary heats of the 4×100-meter freestyle relay. Leamy also represented the U.S. in the Pan American and World Games, where he was a member of several U.S. World Record setting relay teams. Leamy also held the world record in the 50 meter freestyle from 1981 through 1985.