Colonia del Sacramento is a city in southwestern Uruguay, by the Río de la Plata, facing Buenos Aires, Argentina. It is one of the oldest towns in Uruguay and capital of the Colonia Department. It has a population of around 27,000. 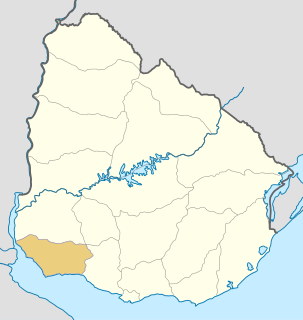 Colonia is a department of southwestern Uruguay. Its capital is Colonia del Sacramento, the country's second oldest city.

The First Treaty of San Ildefonso was signed on 1 October 1777 between the Spanish Empire and the Portuguese Empire. It settled long-running territorial disputes between the two countries in South America, primarily in the Río de la Plata region. 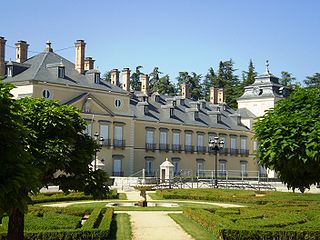 The Treaty of El Pardo signed on 11 March 1778 finalised colonial borders between Spain and Portugal in the Río de la Plata region of South America. Portugal acquired Spanish territories in South America, later on given to Brazil, Spain acquired Portuguese territories in Africa, today known as the independent state of Equatorial Guinea.

Antonio Olaguer Feliú y Heredia López y Domec (1742–1813) was a Spanish soldier and politician who spent most of his career in South America.

Marcos José de Garro Senei de Artola, nicknamed "El Santo", (1623–1702) was a Spanish military man who served in many positions in the colonial administration of the Spanish Empire. He served as governor of Tucumán from 1675–1678, governor of Buenos Aires from 1678–1682 and governor of Chile from 1682-1692. In Spain, he was military commander of the garrison at Gibraltar and Captain General of the Basque Country, a charge which he held until his death in 1702. In the colonies, his nickname was "El Santo" for his religious piety. He is most well known for his successful attack on the competing Portuguese settlement at Colonia del Sacramento, constituting the first Spanish capture of the town.

The Spanish-Portuguese War between 1735-1737 was fought over the Banda Oriental, roughly present-day Uruguay.

Pedro Antonio de Cevallos Cortés y Calderón, also spelled Ceballos, was a Spanish military Governor of Buenos Aires between 1757 and 1766, and the first Viceroy of the Río de la Plata in 1776. 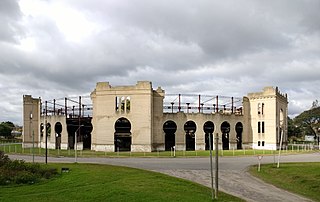 Plaza de toros Real de San Carlos is a bull ring in Colonia del Sacramento, Uruguay. It is currently a derelict building that is crumbling down. It is forbidden for safety reasons to access the bull ring.

The Battle of Martín García was fought from 10 to 15 March 1814 between the forces of the United Provinces of the Río de la Plata under the command of then-Lieutenant Colonel Guillermo Brown, and the royalist forces commanded by frigate captain Jacinto de Romarate, defending the region. 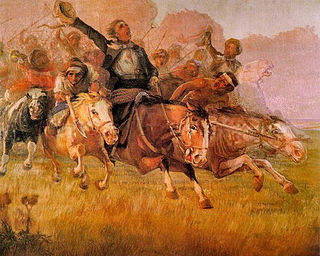 The Cry of Asencio or Admirable alarm was an 1811 pronunciamiento that took place at the Banda Oriental against the Spanish rule in Montevideo. Made in support of Buenos Aires, which had already ousted the viceroy and established a local government during the May Revolution, it is considered the beginning of the Oriental revolution.

The Basilica of the Holy Sacrament is a Roman Catholic parish church in Colonia del Sacramento, Uruguay.

The First Siege of Montevideo took place between May and October 1811, when the troops of the United Provinces of the River Plate unsuccessfully besieged the city of Montevideo, still held by Spanish loyalists.