Sociedade Esportiva do Gama, or Gama, as they are usually called, is a Brazilian football team from Gama in Federal District (Brazil), founded on November 15, 1975.

Until the early 1970s, the city of Gama was known only to its amateur teams. This movement has grown more and more the city's desire to have its first professional football club. Founded in 1975 by Mr. Hermínio Ferreira Neves, the Sociedade Esporte do Gama was the first professional team in the city. The founder was president of the amateur team Minas Atlético Clube.

Formed initially with players of the most diverse amateur teams of the city, Gama soon gained the support of the local population. They played their first professional game on February 21, 1976. With the support of Mr. Valmir Campelo de Bezerra, regional administrator of the city of Gama and a great admirer of local football, the Gama Administration Stadium was rebuilt and reopened on October 9, 1977.

In 1981, SE Gama achieved its first regional title. The team won the Torneio Centro-Oeste by beating Goiânia 2-1 on aggregate. In 1998, the club won the Campeonato Brasileiro Série B.

In late 2017, Gama confirmed that they would be signing former Brazilian World Cup winner Lúcio from Indian side FC Goa. He joined in January 2018. [1]

On November 15, 1975, the day of its founding, the Sociedade Esportiva do Gama adopted as its first coat the coat of arms of the Federal District with the letters SEG. The symbol was a pillar of the Alvorada Palace. Intuitively, Mr. Hermínio Ferreira Neves, introduced the symbol in the Palmeiras uniform.

The club's main rival is Brasiliense. 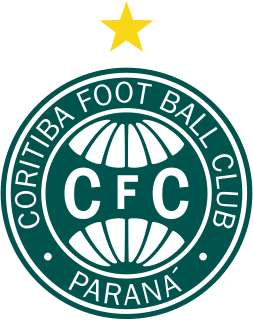 Coritiba Foot Ball Club, commonly known as Coritiba and colloquially referred to as "Coxa Branca" or "Coxa", is a Brazilian football club from Curitiba, capital city of the Brazilian state of Paraná. Founded in 1909, it is the oldest football club in the state. Coritiba have won the Paraná State Championship 38 times – more than both of its main rivals combined. Coritiba has won the Brazilian Championship once in 1985.

Brasiliense Futebol Clube, or Brasiliense, as they are usually called, is a Brazilian football team. It plays in Taguatinga in Federal District (Brazil), founded on August 1, 2000. 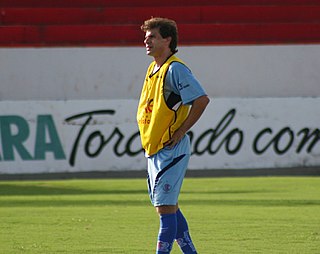 Túlio Humberto Pereira Costa, sometimes simply referred as Túlio or Túlio Maravilha, is a former Brazilian international footballer who played as a forward. He played for many Brazilian club teams, such as Goiás, Botafogo, Corinthians, Vitória, Fluminense, Cruzeiro and Vila Nova and several lower-division teams in Brazil. In Europe, he had short-lived career, playing for Sion and Újpest.

Edino Nazareth Filho, commonly known as Edinho is a Brazilian former football player and manager. He played as a central defender with Fluminense, Grêmio and with the Brazil national team. He is currently a sports commentator.

Luiz Carlos Bombonato Goulart, known as Luizão, is a Brazilian football pundit and retired footballer, who played as a forward.

Estádio Walmir Campelo Bezerra, usually known as Bezerrão, is a Brazilian football stadium, located at administrative region of Gama, in the Distrito Federal. It is currently used mostly for football matches. The stadium has a capacity of 20,000 people.

Sociedade Esportiva Matsubara, usually known simply as Matsubara, is a Brazilian football club based in Cambará, in the state of Paraná. 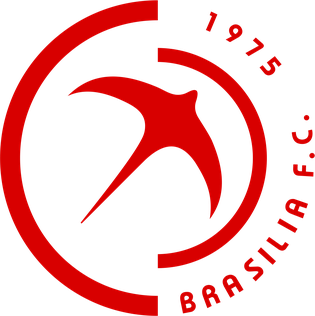 Sociedade Esportiva Tiradentes, commonly known as Tiradentes, are a Brazilian football team from Teresina. They won the Campeonato Piauiense five times and competed in the Série A five times. The women's team competed twice in the Copa do Brasil de Futebol Feminino.

Centro de Futebol Zico de Brasília Sociedade Esportiva, also known as CFZ de Brasília, are a Brazilian football team from Brasília, Distrito Federal. They won the Campeonato Brasiliense in 2002, and competed in the Copa do Brasil in 2003 and in 2005.

Jurandir Dário Gouveia Damasceno dos Santos, commonly known as Dário or Dário Alegria, is a retired football striker who played for several clubs in the Campeonato Brasileiro Série A and the Mexican Primera División. He also participated in the Brazil national football team. 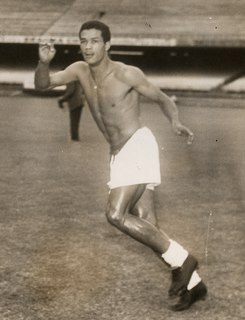 Servílio de Jesus Filho, also known as "Servílio", was a Brazilian football striker who played for several clubs in the Campeonato Brasileiro Série A. He also had a brief spell in the Mexican Primera División. 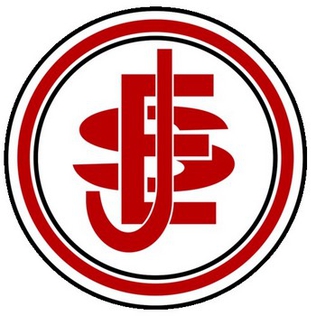