Society 1 is an American industrial metal band formed in the 1990s in Los Angeles, California, by lead singer Matt Zane. They have released four studio albums, a live album, a compilation album, and a spoken word poetry album by vocalist Matt Zane. The band has also performed at several major festivals, including Download, where vocalist Matt Zane broke several records by performing the entire set suspended from four meat hooks through his back. Zane has performed while suspended on several other occasions. [1] 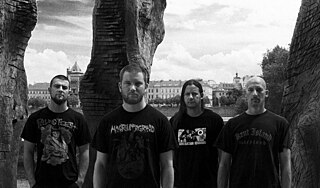 Misery Index is an American death metal band formed in 2001 in Baltimore, Maryland, United States, by Jason Netherton, Mike Harrison, and Kevin Talley (drums). From 2006–2010, its line-up consisted of Netherton on vocals and bass, John Voyles on lead guitar, Mark Kloeppel on vocals and rhythm guitar, and Adam Jarvis on drums. In 2010, Voyles left the band and was replaced by Darin Morris. 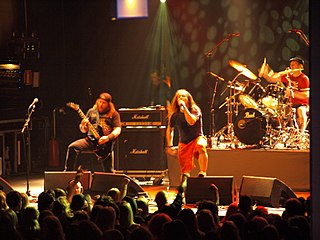 Callisto is a post-metal band from Turku, Finland. The band was formed in 2001 in Kokkola. Whilst their early works are hardcore/metalcore, their first album True Nature Unfolds has a strong sludge metal and doom influence. Recorded in 2004 by the late Mieszko Talarczyk of Nasum fame and introduced to Earache Records a year later through Johannes Persson from Cult of Luna, earning them worldwide distribution.

Malice is an American heavy metal band formed in 1981, best known for their appearance on the first Metal Massacre compilation and a pair of albums on Atlantic Records. Their heavily European influenced style elicited instant comparisons to Judas Priest due to vocalist James Neal sounding uncannily like Rob Halford in addition to fielding a guitar duo in the Tipton/Downing mode, with Malice's Jay Reynolds looking like a dead ringer for K.K. Downing.

Cannibalised is the third album from the British metal band Biomechanical. It is their second album to be released by Earache Records. There is a limited edition available with four bonus tracks of orchestral compositions of past Biomechanical songs.

Kill II This are an English Metal band from Manchester, England.

Biomechanical are an English progressive groove metal band from London, England. Biomechanical’s existence started back in April 1999 by the founding member John K who wrote, recorded and arranged all of the music, with the exception of the songs ‘Existenz’ and ‘Survival’ which were co-written by Chris Webb and Jamie Hunt respectively. The lyrics were written by Adam Rose and John K & Jon Collins.

"Living in a Ghost Town" is a song by English rock band the Rolling Stones. It was released on 23 April 2020 through Polydor Records, making it the first Rolling Stones single in four years and the first original material from the band since "Doom and Gloom" and "One More Shot" in 2012. The song has received positive reviews from critics and was recorded during sessions for a forthcoming studio album that the band has been working on since 2015.