Society of the Holy Trinity

The Society of the Holy Trinity (Societas Trinitatis Sanctae or STS) is a Lutheran ministerium dedicated to the renewal of Lutheran churches and ministry. The society was founded in 1997 by 28 pastors. [1] As of April 2015, 283 pastors are subscribed to the Rule of the Society. [2]

The Society of the Holy Trinity was founded in response to the theological climate in the formative years of the Evangelical Lutheran Church in America (ELCA). A primary concern among those who would become founders of the society was language for God: specifically, the triune name of "Father, Son, and Holy Spirit." Efforts during and immediately after the formation of the ELCA to introduce gender-neutral Trinitarian formulae in the rite of Baptism and other liturgical rites failed to gain official acceptance; however, the determination of those who demanded the change, and their entrenchment in positions of power in the new denomination, was highly alarming to those who would eventually become founders of the Society. In response to this and other theological issues, a group of pastors developed the "9.5 Theses" [3] and published them for discussion in the ELCA. Over 700 pastors and 300 laypeople signed the document, but the leaders of the denomination refused to give a public hearing to the "9.5 Theses". This refusal to acknowledge the existence of the issues led to the formation of the Society, conceived as an oratory in which pastors would support each other in being faithful to the vows made at ordination. [4]

From its beginning, the society has been an inter-Lutheran ministerium. Membership is open to both male and female pastors from any Lutheran church body. [5]

A Lutheran pastor becomes a member by publicly subscribing to the Rule [6] at the annual general retreat, usually held in the early fall of each year. Pastors are challenged to remain faithful to their ordination vows by continual deepening of formation in: prayer (Chapters I and V), Christian life as duty and example (Chapter II), collegiality (Chapters III and IV), and study (Chapter VI). In addition, the rule outlines a faithful pastoral practice seeking to renew Lutheran congregational life along catholic and confessional lines. Among the trajectories for renewal are a recovery of the public prayer of the divine office or canonical hours (Chapter I), and worship practice according to scriptural, creedal, and confessional standards, including the restoration of the practice of voluntary private confession and absolution in Lutheran congregations (Chapter VII). Finally, the Rule commits members to pursuing the cause of Lutheran unity as well as the unity of the Western Church (Chapter VIII).

Chapter IX of the Rule outlines the governance of the Society. The entire Society is under the pastoral direction of a senior, who appoints a vicar. The senior convenes the Society once a year in a general retreat, with local chapters meeting at least three other times during the year under the direction of a chapter dean. Both the senior, at general retreats, and the deans, at chapter retreats, are elected for three-year terms by a "pure ecclesiastical ballot." Any member of the Society may receive votes on any ballot. Successive ballots are taken until consensus is reached. [7] A vicar, secretary, and editor are appointed by the senior. A bursar is elected by majority vote.

On September 23, 2015, The Rev. Patrick J. Rooney was elected for a three-year term as Senior of the Society of the Holy Trinity. He is the third Senior in the history of the Society.

In 2008 the society received two statements of its leadership council by consensus at its general retreat. These statements give pastoral guidance to members concerning "Language in Worship" (in response to new worship resources developed by American Lutheran denominations) and "Same-Sex Unions" (anticipating the 2009 ELCA Churchwide Assembly which voted to allow congregations, synods, and churchwide units to decide for themselves whether to call those in committed same-sex relationships to rostered leadership).

The Confessing Movement is a lay-led conservative Christian movement that opposes the influence of liberalism and progressivism within several mainline Protestant denominations and seeks to return them to its view of orthodox doctrine. After the 2019 United Methodist General Conference, the denomination is sharply divided and will likely separate or divide into two or more denominations. An exit plan for congregations and annual Conferences passed the 2019 General Conference and upheld by the Judicial Council.

WordAlone is a Lutheran grassroots network of congregations and individuals within the Evangelical Lutheran Church in America (ELCA), the largest Lutheran denomination in the United States. According to its website, WordAlone advocates reform and renewal of the church, representative governance, theological integrity, and freedom from a mandated historic episcopate. The group is generally considered theologically and socially conservative. As of 2005, approximately 215 congregations have officially joined the organization.

Lutheran Congregations in Mission for Christ (LCMC) is an association of Lutheran congregations in the United States. It describes itself as an affiliation of autonomous Lutheran churches and not a denomination. It began in 2001 in response to some liberal views of the Evangelical Lutheran Church in America (ELCA). LCMC is characterized by the stances it takes on Lutheran polity, biblical authority, and human sexuality. The group describes itself as "centrist" or "mainstream", noting that it stands between the more liberal ELCA and the more conservative Lutheran Church–Missouri Synod (LCMS) and other Lutheran church bodies in North America.

Solid Rock Lutherans was a group of Lutheran clergy and laity within the Evangelical Lutheran Church in America (ELCA) who opposed liberalizing that Church's position on the ordination of non-celibate gay and lesbian persons on the basis of scriptural authority. Having stated that it achieved its goal in the recent ELCA Churchwide Assembly, held in August 2005, Solid Rock Lutherans ceased operations in November 2005.

The Virginia Synod is one of the 65 synods of the Evangelical Lutheran Church in America, consisting of the entire state of Virginia except for several counties and cities in the Metropolitan Washington, D.C. Synod. The Evangelical Lutheran Church in America (ELCA) was formed in 1988 and currently has over 9300 congregations and 3.6 million members in all 50 states. Known as the church of "God's work. Our hands," the ELCA emphasizes the saving grace of God through faith in Jesus Christ, unity among Christians and service in the world. The ELCA's roots are in the writings of the German church reformer, Martin Luther.

Herbert W. Chilstrom is an American religious leader, who served as the first Presiding Bishop of the Evangelical Lutheran Church in America (ELCA). He was re-elected to a four-year term at the 1991 ELCA Churchwide Assembly in Orlando, Florida. He is the former bishop of the Minnesota Synod of the Lutheran Church in America, one of the three church bodies which merged to form the ELCA on Jan. 1, 1988.

Extraordinary Lutheran Ministries (ELM), founded on October 31, 2007, is an organization committed to the full participation of persons of all sexual orientations and gender identities in the life and ministry of the Lutheran church. ELM stands in opposition to the policies of discrimination against gay, lesbian and transgender individuals in Lutheran churches around the world.

The North American Lutheran Church (NALC) is a Lutheran denomination with over 420 congregations in the United States and Canada, counting more than 142,000 baptized members. As a Confessional Lutheran church, the NALC believes all doctrines should and must be judged by the teaching of the Christian Scriptures, in keeping with the historic Lutheran Confessions. It was established on August 27, 2010. The group describes itself as embodying the "theological center of Lutheranism in North America," noting that it stands between the more liberal Evangelical Lutheran Church in America (ELCA) and the more conservative Lutheran Church–Missouri Synod (LCMS) and other Lutheran church bodies in North America, "firmly within the global Lutheran mainstream". 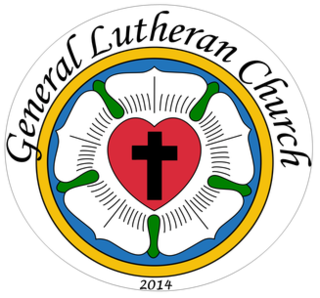 The General Lutheran Church, Inc. is a small Lutheran denomination organized on March 9, 2014, and incorporated in the State of Indiana on October 26, 2017. It was founded when ministers of four other Lutheran church bodies who objected to various positions held in their respective churches, specifically regarding atonement, women's ordination, worship styles, and the Lutheran Confessions, met to discuss these and other issues of concern. This meeting led to the establishment of the General Lutheran Church and to its endorsement of universal salvation, women's ordination, and flexibility with regards to liturgical matters. The church claims to be a successor to the former Evangelical Lutheran General Synod of the United States of America.

The Augsburg Lutheran Churches is a moderate-to-conservative, confessional Lutheran denomination in the United States.