The Soviet Championship was a rugby union club competition between the domestic teams of the Soviet Union era. It was first contested in 1966, and was last held in 1990.

The Soviet Union, officially the Union of Soviet Socialist Republics (USSR), was a socialist state in Eurasia that existed from 1922 to 1991. Nominally a union of multiple national Soviet republics, its government and economy were highly centralized. The country was a one-party state, governed by the Communist Party with Moscow as its capital in its largest republic, the Russian Soviet Federative Socialist Republic. Other major urban centres were Leningrad, Kiev, Minsk, Tashkent, Alma-Ata, and Novosibirsk. It spanned over 10,000 kilometres (6,200 mi) east to west across 11 time zones, and over 7,200 kilometres (4,500 mi) north to south. It had five climate zones: tundra, taiga, steppes, desert and mountains.

The Soviet Cup was a rugby union club competition between the domestic teams of the Soviet Union era. The first competition was held in 1976, and continued on an annual basis until 1990. 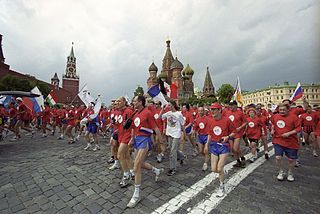 The Soviet Union women's national rugby union team played six matches between 1990 and 1991. The team was severely underfunded, surviving the 1991 World Cup by bartering and selling items of kit and other trinkets. They ceased playing after 1991, because of the collapse of the Soviet Union.

Rugby union in Finland is a minor but growing sport. They are currently ranked 92nd by World Rugby World Rugby.

Rugby union in the Soviet Union was a moderately popular sport. It was most popular in Georgia; parts of the Russian SFSR such as Moscow and certain regions in Siberia like Krasnoyarsk; and Alma-Ata, the former capital of Kazakhstan. Rugby enjoyed a more limited popularity in the Ukraine, Minsk in the Byelorussia and parts of the RSFSR such as Leningrad and areas in Southern Russia, including Krasnodar. Rugby gained a significant following due to the vast size of the Soviet Union, but was never a major sport; despite many attempts to develop the sport, which Soviet citizens came to nickname the "leather melon" due to the shape of the ball. Still, an early championship in 1960 gives an idea of the sheer scale of Soviet rugby: one hundred teams from over thirty cities took part.

Krasny Yar Krasnoyarsk is a Russian rugby union club founded in 1969 in the city of Krasnoyarsk, the unofficial capital of Russian rugby. They compete in the Professional Rugby League, the premier league in the country. They have an operating budget of 2.5m Euros, making them one of the biggest clubs in the competition. Their main rival is fellow Krasnoyarsk based, Enisey-STM.