In 1949, rugby union was forbidden in the USSR during the "fight against the cosmopolitanism". The competitions were resumed in 1957, and the Soviet Championship in 1966. In 1975 the Soviet national team played their first match. [1]

In 1962, rugby in Uzbekistan underwent a major expansion as four new teams were founded. [2]

Uzbekistan had its own rugby team in the USSR, but it was not treated as a proper national side.

Uzbek rugby, like that of Kyrgyzstan is mainly confined to the military and universities, although there is a schools programme underway. [3] Kazakhstan has been a major impetus for rugby growth in the region (Almaty had a team in the Soviet league, and they also have a formidable women's team), and has been a major factor in keeping the game going in its neighbouring countries. For years, most of Uzbekistan's games, formal, or informal were against Kazakhstan, or Kazakh domestic sides. [3]

Currently they take part in the Central Asian region of the Asian Five Nations.

Central Asia is a region which stretches from the Caspian Sea in the west to China and Mongolia in the east, and from Afghanistan and Iran in the south to Russia in the north. The region consists of the former Soviet republics of Kazakhstan, Kyrgyzstan, Tajikistan, Turkmenistan, and Uzbekistan. It is also colloquially referred to as "the stans" as the countries generally considered to be within the region all have names ending with the Persian suffix "-stan", meaning "land of". Depending on different interpretations, the neighbouring areas are sometimes also considered part of the region. 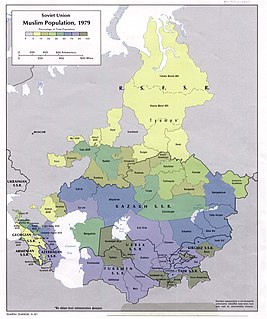 The Union of Soviet Socialist Republics (USSR) was a federation made up of 15 Soviet socialist republics, and existed from 1922 until its dissolution in 1991. Six of the 15 republics had a Muslim majority: Azerbaijan, Kazakhstan, Kirghizia, Tajikistan, Turkmenistan, and Uzbekistan. There was also a large Muslim population in the Volga-Ural region and in the northern Caucasus region of the Russian Soviet Federative Socialist Republic. Many Tatar Muslims also lived in Siberia and other regions.

Rugby union in Tajikistan is a minor but growing sport.