Rugby union in Paraguay is a secondary sport. With 4,355 registered players and twenty clubs, the country currently ranks 37th worldwide and 4th in South America. [2]

The first recorded game of rugby in the country was in the 1930s, between players from Cerro Porteño and Olimpia (the country's two biggest football clubs). Further development of the game was sporadic.

Asuncion Rugby Club, the country's first official rugby club, was formed in the late 1960s by two Britons, two Argentines, a Dutchman, and a New Zealander. [4] They played informal games in the Jardin Botanico (Botanic Gardens of Asuncion) and travelled to Argentina for games.

In 1970 a second club was set up in Asuncion, the Club Universitario de Asunción (CURDA). Further clubs were established in the 1970s and 1980s.

The sport's governing body, the Paraguayan Rugby Union (Union de Rugby del Paraguay), was founded in 1970 and joined the IRFB in 1989. [3]

The traditional stronghold of Paraguayan rugby has been the capital, Asuncion, where the majority of clubs have been based. However Since 2000 a number of Asuncion clubs have folded, combined, or struggled to field teams in both Primera (First Grade of the Paraguayan Rugby Union Championship) and Intermedia (reserve grade).

Las Leones de Encarnacion, from the south of the country, competed in Primera until 2009 when they switched to compete in the URNE championship of Northern Argentina. Encarnacion is a riverside city opposite the Argentine city of Posadas. Las Leones often fielded a strong team in Primera, but they are closer to the Posadas, Corrientes and Resistencia, than to Asuncion (a 5-hour bus trip). While strong at home they often struggled to field a competitive team when traveling to Asuncion every second week for Primera. They have since won the URNE championship.

Since 2010 there has been strong growth in both women's rugby and rugby outside of and in the outskirts of Asuncion. Traditionally teams such as Ciudad del Este and Coronel Oviedo played only occasionally, or fielded a team in Intermedia or Primera where they often struggled. In 2010 a separate "Campeonato del Interior" was established, in which developing clubs from the countryside played. Teams include Santani, Coronel Oviedo, Villarica, Ciudad del Este and Presidente Franco.

All Primera teams are now obliged to field a women's team. The women play 7-a-side rugby with mini 7 a side championships held every couple of weeks.

From 2013 a separate Campeonato Metropolitano (Metropolitan Championship) was also established, for new developing teams from Asuncion which could not yet compete in Primera. Teams include San Lorenzo, Capiata, Asuncion, and Sajonia.

Primera Teams also usually field Under 18, Under 16, Under 14 and Junior teams, and, as of recently, women's rugby teams.

There are several former clubs which no longer exist, such as Los Cuervos, Jabalí and Yakaré.

As mentioned above, women's rugby in Paraguay involves the teams from Primera fielding Seven-a-side teams. To play in Primera teams are obliged to field a women's team, which has spurred on the development of the sport for women.

Old King Club has dominated women's rugby in Paraguay, winning every women's championship and providing the bulk of the Paraguayan Women's Seven-a-side team. Both Old King Club and the National Women's Team are coached by Victor Velilla.

Although Paraguay's women have not yet played a full 15 a sive test match, they have been playing international sevens rugby since 2004. In 2013 they came 8th and last in the CONSUR South American Women's Sevens Championship.

In France, Cesar Meilike, Jatar Fernandez, Fabio Franco and Emiliano Arnau played for Strasbourg, and José Otaño and Joel Orihuela for US CENAC, at Fédérale 2, and Freddy Lares and Miguel Jara for Houilles Carrilies at Fédérale 3.

The División Profesional de la Asociación Paraguaya de Fútbol, also known as the Primera División[pɾiˈmeɾa ðiβiˈsjon], or due to sponsorship reasons Copa de Primera TIGO-Visión Banco, is the top-flight professional football league in Paraguay. Currently, there are 10 teams in the first division.

The Paraguay national rugby team is governed by the Paraguayan Rugby Union. They compete regularly in the South American Rugby Championship, but have yet to qualify for the Rugby World Cup.

The Paraguayan football league system is a series of interconnected leagues for football clubs in Paraguay.

Lomas Athletic Club is an Argentine sports club from the Lomas de Zamora district of Greater Buenos Aires. One of Argentina's oldest clubs still in existence, Lomas is one of the four institutions that founded the "River Plate Rugby Championship" in 1899, The rugby union team currently plays in Primera A, the second division of the URBA league system.

Tercera División de Paraguay, is the third division of Paraguayan football (soccer), and it is organized by the Paraguayan Football Association in the metropolitan area, and organized by the Unión del Fútbol del Interior, in the rest of the country, except Asunción and Central department.

Club de Gimnasia y Esgrima is an Argentine multi-sports club placed in the city of Buenos Aires. The institution is one of the oldest in the country, having been established in 1880. Gimnasia y Esgrima is also one of the largest clubs of Argentina, with around 30 different disciplines hosted in the three buildings that the institution owns in Buenos Aires.

The 1967 Primera División season was the 76th season of top-flight football in Argentina. It was the first season in which the Metropolitano and Nacional championships format was used.

Club Atlético del Rosario is an Argentine sports club from Rosario, Santa Fe. One of the oldest clubs still in existence in the country, Atlético del Rosario was a pioneer of football in Rosario, being the first team from that city to play in Primera División, the top division of the Argentine football league system. At the international level, Rosario A.C. was also the first team outside Buenos Aires to win an international tournament, the Tie Cup on three occasions. Atlético was also a founding member of the Liga Rosarina de Football, the main body that organised the practice of association football in Rosario from 1905 to 1930.

The 2009 División Profesional season is the 75th season of top-flight professional football in Paraguay. It is the second season in which a champion will be crowned for each tournament. 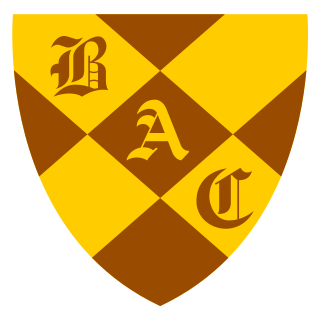 Belgrano Athletic Club is an Argentine amateur sports club from Belgrano, Buenos Aires. One of Argentina's oldest institutions still in existence, Belgrano was one of the four clubs that founded the Argentine Rugby Union in 1899. The senior team currently competes at Top 12, the first division of the Unión de Rugby de Buenos Aires league system.

Buenos Aires Cricket & Rugby Club, sometimes known simply as Buenos Aires, is an Argentine sports club based in San Fernando, Buenos Aires. Having set its official date of foundation on December 8, 1864, the club claims to be the oldest club still in existence in Argentina, according to reports of a cricket match played by the club in Recoleta, Buenos Aires, in 1831.

Club San Fernando is an Argentine multi-sports club based in San Fernando, Buenos Aires. One of the largest clubs of the North side of Greater Buenos Aires, the club hosts a wide range of sports and activities, such as basketball, basque pelota, bowls, canoe racing, chess, field hockey, football, gymnastics, judo, rowing rugby union, swimming, tennis, volleyball and yachting.

The 2015 División Profesional season is the 81st season of top-flight professional football in Paraguay.

The 2021 División Profesional season will be the 87th season of the Paraguayan Primera División, the top-flight professional football league in Paraguay. The season is scheduled to begin on 5 February and end on 5 December 2021. The fixtures for the season will be announced on 15 January 2021. Olimpia will be the defending champions after winning the 2020 Clausura tournament.