Rugby union in Norway is a minor but growing sport.[ citation needed ]

For a number of years, Norway was perhaps the most northerly country playing the sport, and boasted the world's most northerly rugby club, Oslo RFC, [1] which was founded in 1964. [2]

Norway was the last of the three Scandinavian countries to take up rugby. However, amongst the Nordic Countries, it is by no means the weakest, Norway are good against smaller teams but are not very good under pressure but still play well. as it is a more recent introduction to Finland, and has no presence in the other three nations. [3] A major problem though, is the climate, which means that many pitches may be under snow for large parts of the year. Serious interest in the game began in the 1960s. [2]

For many years, Oslo RFC was the most northerly rugby club in the world. [1] Stavanger Rugby Club was formed in 1978 and played Oslo in the Autumn of that year, presenting Oslo with a trophy, a rockbit, in 1979, a return match was played in Stavanger; Oslo won both matches.. During the mid-1980s, Oslo RFC's nearest opposition in Norway was Stavanger, a round trip of 685 miles. [1] Their nearest club was Karlstad RFC in Sweden a round trip of 310 miles. [1]

Rugby has a much longer standing in neighbouring Sweden and Denmark, which have a combined figure of around 10,000 registered players, [3] and it has been introduced there. Rugby union is also played in neighbouring Shetland, and visitors from there have toured Norway, including people from the British military bases and ships there. [3]

Norway played its first international against Latvia who beat them 44-6. [3] At the time, the Welsh fly-half Huw Howells was the driving force in trying to promote the game. [3] 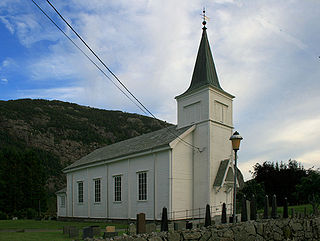 Lund is a municipality in Rogaland county, Norway. It is located in the traditional district of Dalane. The administrative centre of the municipality is the village of Moi. Other villages in Lund include Eik and, Heskestad. European route E39 and the Sørlandet Line both pass through Lund. Moi Station is a railway station in Lund.

Erik Lund is a former Norwegian rugby union footballer who played lock forward for Norway and since 2010 for the French team Biarritz, where he joined his younger brother Magnus. He formerly captained Leeds Carnegie.

Rogaland Teater is a theatre in Stavanger, Norway.

Ida Börjel is a Swedish poet.