Rugby union in Madagascar is a popular team sport. As of September 2018, Madagascar is ranked 50th worldwide by World Rugby (WR), [2] and boasts over 22,540 registered players and more than 410 rugby clubs. [3] Although Madagascar lacks a professional competition as it is one of the poorest countries in the world, it does possess a national club competition that is extensively covered in the national print media, as well as having matches televised. Rugby is considered the national sport of Madagascar. [4] [5]

The governing body is the Fédération Malagasy de Rugby. [1]

Rugby union was introduced to Madagascar in the 1890s by French railroad workers who played the game in the capital, Antananarivo, during the colonial period. Historically the sport was seen as a violent pastime of the poor, however recent developments have seen a huge increase in the sport's profile throughout the country. [6] The Madagascar team, locally referred to as the Makis (a Malagasy word for the ring-tailed lemur), reached the finals of the 2005 Africa Cup, increasing nationwide interest in the sport. Since then they have been semi-finalists in the 2006 Africa Cup and finalists again in the 2007 Africa Cup.

Madagascar is a founder member of the Confederation of African Rugby (CAR), which was launched officially in January 1986, in Tunis, Tunisia. Rugby officials from Tunisia, Morocco, Senegal, Ivory Coast, Tanzania, Kenya, and the Seychelles also attended.

The national club competition is structured along the same lines as the Argentine club championship. The regional unions within Madagascar send their top club(s) from the previous year's championship to compete in the nationwide top-flight league called the Top 8.

In addition to large participant numbers, rugby is popular with spectators in Madagascar. The Top 8 has average attendance figures of over 8,000, whilst the league final, and most international fixtures, attract crowds upward of 30,000 at the Stade Municipal de Mahamasina in the capital. It is common that international rugby matches substantially outdraw those of football at the Mahamasina. Rugby's popularity is strongest in the central highlands region including Antananarivo.

Rugby union's popularity in the country was recently demonstrated during the Division 1B Final of the Africa Cup, held in Madagascar. Madagascar triumphed over Namibia in front of 40,000 fans to stay in the qualification process for the 2015 Rugby World Cup to be held in the United Kingdom. [7]

In Madagascar, rugby is a very popular sport among women. It is estimated that 60% of players in the country are women. The girls from Sapphire Coast and their captain Marcelia, backed by the French NGO Terres en Mêlées are emerging as models for the development of women rugby in poor areas outside the capital city. They actually won twice the national girls championship. Rugby is thus becoming a real tool to fight against poverty and develop gender equality in the country. Marcelia has been nominated one of the five most influential women of the country in 2019 by promoting development through rugby in Madagascar and in France.

Antananarivo, also known by its colonial shorthand form Tana, is the capital and largest city of Madagascar. The administrative area of the city, known as Antananarivo-Renivohitra, is the capital of Analamanga region. The city sits at 1,280 m (4,199 ft) above sea level in the center of the island, the highest national capital by elevation among the island countries. It has been the country's largest population center since at least the 18th century. The presidency, National Assembly, Senate and Supreme Court are located there, as are 21 diplomatic missions and the headquarters of many national and international businesses and NGOs. It has more universities, nightclubs, art venues, and medical services than any city on the island. Several national and local sports teams, including the championship-winning national rugby team, the Makis are based here.

The Madagascar national football team, nicknamed Barea after the island's zebu, is the national team of Madagascar and is controlled by the Malagasy Football Federation. It has never qualified for the finals of the World Cup. It took part in its first Africa Cup of Nations in 2019. Among its biggest wins was a 1–0 home victory over Egypt in the qualification rounds of the 2004 Africa Cup of Nations until being surpassed by a recent shocking 2–0 win over Nigeria in the group stage of the 2019 Africa Cup of Nations. Reflecting the official name of the country at the time, the team was known as the Malagasy Republic national football team between 1958 and 1975.

AS ADEMA Analamanga is a Malagasy football club based in Antananarivo, Madagascar. They have won the THB Champions League championship on three occasions, in 2002, 2006 and 2012. In 2002 they also advanced to the quarterfinals of the CAF Cup before losing to Al-Masry of Egypt.

Football is, followed by the second sport rugby union, the most popular sport in the African island nation of Madagascar. The sport is governed in the country by the Malagasy Football Federation. 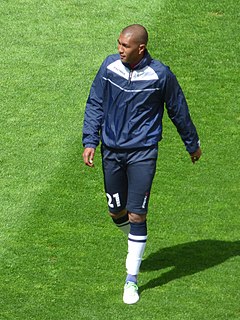 The 2012 Africa Cup was the twelfth edition of the Africa Cup, an annual international rugby union tournament for African nations organised by the Confederation of African Rugby (CAR). The tournaments between 2012 and 2014 will also serve as qualifiers for the 2015 Rugby World Cup.

The Africa section of 2015 Rugby World Cup qualifying saw thirteen teams competing for one direct qualification spot into the final tournament in England, and one spot in the Repechage play-offs.

The Madagascar women's national football team is the FIFA recognised senior women's A team for Madagascar. The team played their first FIFA matches in 2015. The development of a national team in the country is problematic because of issues found on the continent and on the island, specifically the lack of popularity of women's football as a participation sport in Madagascar.

The 2014 Africa Cup was the fourteenth edition of the Africa Cup, an annual international rugby union tournament for African nations organised by the Confederation of African Rugby (CAR). The tournament, as well as the 2012 and 2013 editions of it, served as the qualifiers for the 2015 Rugby World Cup.