Rugby union in Nauru is a minor but growing sport. The national team have competed in various international competitions, including the Pacific Games.

Rugby was introduced into Nauru, by its connection with Australia and the British Empire.

Traditionally, Australian Rules football is the main sport in Nauru, and Rugby league comes second. However, both of these sports have skills which lend themselves to playing rugby union, and it is relatively easy to convert, particularly from the latter.

Nauru, officially the Republic of Nauru and formerly known as Pleasant Island, is an island country and microstate in Oceania, in the Central Pacific. Its nearest neighbour is Banaba Island in Kiribati, 300 km (190 mi) to the east. It further lies northwest of Tuvalu, 1,300 km (810 mi) northeast of the Solomon Islands, east-northeast of Papua New Guinea, southeast of the Federated States of Micronesia and south of the Marshall Islands. With only a 21 km2 (8.1 sq mi) area, Nauru is the third-smallest country in the world behind Vatican City and Monaco, making it the smallest republic. Additionally, its population of 10,670 is the world's second smallest, after Vatican City.

Rugby union is played in Tuvalu. Unlike most South Pacific islands, rugby union is largely played on an informal basis alongside football (soccer), which is the main sport played by Tuvaluans.

The Junior Wallabies is the national under-20 team that represents Australia playing rugby union. The team has been competing at the annual World Rugby U20 Championship since it began in 2008, replacing the previously held under-19 and under-21 championships. The team also competes at the Oceania U20 Championship as of 2015. 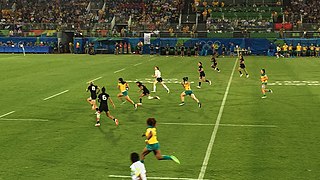 Bond Sports Park is a multi-purpose sporting facility on the Gold Coast in Queensland, Australia. The precinct includes a rugby union stadium which has hosted professional and international matches, including National Rugby Championship playoffs  and the annual Oceania Rugby Under 20 Championship tournament. It is located on the Bond University campus.

The Nauru national rugby union team is the national team of the third tier rugby union playing nation of Nauru. The team made its full international debut in the 2019 Oceania Cup. Rugby union in Nauru is administered by the Nauru Rugby Union.