In 1924 a scratch team of Rarotongan boys, including the late Sir Albert Henry, played the All Black Invincibles on their way to the United Kingdom. The game was drawn 0–0. [1]

The Cook Islands played their first official international on September 1, 1971 against Western Samoa, losing 24 points to 18. The Cook Islands went on to win against Wallis and Futuna the next day and then lose again to Samoa the day after.

The next time the Cook Islands played was nine years later in 1980, in a close game against a touring Italian side; the Cook Islands won by 15 – 6. Three years later they again played Samoa, again losing. The next match for the Islanders wasn't until 1996, when they played Papua New Guinea. Since then, they play regularly against them and fellow Pacific sides Niue and Tahiti.

The best Cook Islands rugby players often play in New Zealand where there is a large Cook Island population.

The Cook Islands entered recently Oceania Cup, but were surprisingly eliminated by Niue who beat them 18–7 at Rarotonga.

Below is table of the representative rugby matches played by an Papau New Guinea national XV at test level up until 20 April 2020. [4] 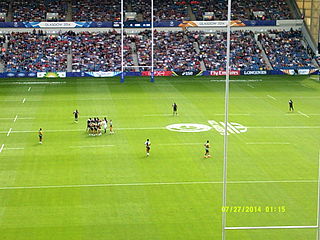 In qualification for the 2003 Rugby World Cup, a number of positions were available to Oceania nations. Fiji, Samoa and the Tonga would eventually qualify, joining automatic qualifiers Australia and New Zealand.

The Federation of Oceania Rugby Unions (FORU) section of the 2015 Rugby World Cup qualification involved five teams competing for one spot in the final tournament in England.

Qualifying for the 2019 Rugby World Cup for Oceania Rugby began in June 2016, where across 2 years, 3 teams competed for two direct qualification spots from Oceania. Two places were available to Oceania in a cross-regional play-off series' to qualify for the World Cup and or advance through the Repechage.