Rugby Union, which is played in 105 countries around the world, has been played in Brunei since the 1950s.

The Brunei Rugby Football Union was set up in 1977, affiliated to the Rugby Football Union (RFU) of Twickenham. From then on, Brunei regularly sent teams to participate in regional 'Sevens' competitions, particularly the SCC Sevens in Singapore and the prestigious Hong Kong Sevens.

Since joining the Asian Rugby Football Union, the Brunei Rugby Team has taken part in a number of international competitions. Although presently recording a rather unfavourable Win-Loss ratio in the international rugby scene, Brunei rugby is continually improving with efforts being concentrated in the development of youth players through the Under-19 Squad.

The Under-19 National Rugby Squad of Brunei is seen as a platform from which the Brunei Rugby Football Union seeks to develop young players for the Senior team. Currently, the Under-19 squad has played in two Asian Under-19 Rugby Tournaments (as of September 2007) in Lahore, Pakistan and Taipei, Taiwan respectively.

The first ever Brunei Under-19 Rugby International was played against the Pakistan Under-19 Team at the Fortress Stadium in Lahore. Brunei emerged victorious with a scoreline of 14-5 in their favour - an upset considering the comparative populations and rugby history of the respective countries. Former Fiji National coach George Dreadon Simpkin commented on the impressive pace of the Bruneian backline whilst spectating the encounter. The free-running style of open, fast-paced play has become a trademark of the Bruneian team, although it has come under heavy criticism for sacrificing form and discipline in the favour of quick, energy-consuming tries.

The members of the first ever Brunei Under-19 Squad selected for the 2005 Asian Under-19 Rugby Tournament are as follows: 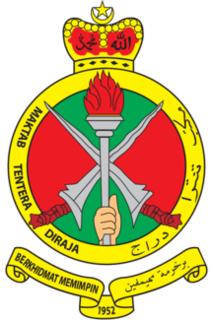 Royal Military College is an all-boys military school established to train young Malaysians for service in the Malaysian Armed Forces (MAF). It is sometimes dubbed "the Malaya's Sandhurst".

Duli Pengiran Muda Mahkota Football Club is a professional football club based in Bandar Seri Begawan, Brunei. The club played in the Brunei Premier League in the early 2000s, winning the league title in 2002 and 2004. The club then decided to play in Malaysia, and joined the Malaysian Premier League as a foreign-based team in for the 2005–06 season. They won promotion to the Malaysian Super League at the end of their first season in Malaysian football, and then finished 3rd and 10th in the following two season in the Super League. The club then left the Malaysian league and joined Singapore's Singapore Premier League for the 2009 season. They won the Singapore League Cup, but were then forced to withdraw from the league competition five games before the end of the season after FIFA suspended the Football Association of Brunei Darussalam for government interference in its affairs, thus barring teams from Brunei from taking part in overseas competitions. All the club's league results for 2009 were therefore expunged. At the end of the suspension, they re-entered the S.League and won the title in 2015, just after a near-miss in 2014. 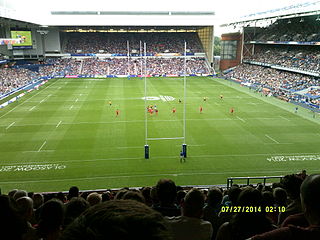 The Malaysia national rugby sevens team is a minor national sevens side. They have competed in the Hong Kong Sevens since the 1980s. Malaysia also qualified for the 2010 Commonwealth Games.

The 2014 Hassanal Bolkiah Trophy was the fifth edition of the invitational tournament hosted by Brunei. The tournament take place in Brunei from 9–23 August 2014. Eleven teams from the Asean Football Federation participate in the tournament for under the age of 22. The draw took place on 12 July 2014 at the National Football Association of Brunei Darussalam (NFABD) House. The teams are divided into two groups. Host country, Brunei, were given a chance to choose which group they wished to be drawn in. Brunei chose to be drawn in group B. Indonesia was to confirm its participation in the tournament but was not included in the initial draw. Indonesia's participation was later confirmed by the National Football Association of Brunei Darussalam on 20 July and a second draw was held on 22 July to include Indonesia. Indonesia send its U19 team.

Reduan bin Haji Petara is a Bruneian international footballer who plays for Kasuka FC and the Brunei national team as a defender.

Rosli bin Haji Liman is a retired Bruneian international footballer who played for the Brunei M-League representative team as a midfielder.

Awangku Yura Indera Putera bin Pengiran Yunos is a Bruneian footballer who plays for DPMM FC and the Bruneian national team as a defender or midfielder. Described by his former coach Steve Kean as having "fantastic physical attributes", he is one of Brunei's most important footballing prospects, having made his national team debut at the age of 17.

Lance Corporal Haji Mohammad Yusof bin Haji Matyassin is a Bruneian international footballer who last played with MS ABDB of the Brunei Super League as a defender. He had a one-year stint with Brunei's sole professional club DPMM FC in 2014.

Haji Abdul Khair bin Haji Basri is a Bruneian international footballer who plays for Indera SC. Predominantly a central midfielder, his attributes and versatility also allows him to play as a centre-back or as a forward when required.

Haji Rahimni bin Haji Pundut is a Bruneian footballer who plays for Setia Perdana FC in the Brunei Super League as a striker. Due to a typing error, his patronym is mistakenly referred to as Pundat.

Muhamad Aqmal Hakeem bin Abdul Hamid is a Bruneian footballer who plays for Indera SC of the Brunei Super League as a midfielder or forward. He has won two league championships with Indera and previously QAF FC. He also made three appearances for the Brunei national football team in 2009.

Mohammad Asri bin Haji Aspar is a Bruneian international footballer who plays as a midfielder for Kasuka FC of the Brunei Super League.