Rugby was originally introduced when Laos was part of French Indochina, but this was mainly by French expatriates. After independence there was a long hiatus, as financial and political forces, from famine to the Vietnam War meant it was impossible for the game to be played.

The Indochinese Cup was established in 1999, as a four sided tourname between Vietnamese teams from Saïgon and Hanoi, Vientiane (Laos) and Phnom Penh in Cambodia. [3]

The foreign relations of Laos, internationally designated by its official name as the Lao People's Democratic Republic, after the takeover by the Pathet Lao in December 1975, were characterized by a hostile posture toward the West, with the government of the Lao People's Democratic Republic aligning itself with the Soviet bloc, maintaining close ties with the Soviet Union and depending heavily on the Soviets for most of its foreign assistance. Laos also maintained a "special relationship" with Vietnam and formalized a 1977 treaty of friendship and cooperation that created tensions with China.

Stung Treng, is a province of Cambodia in the northeast. It borders the provinces of Ratanakiri to the east, Mondulkiri and Kratie to the south and Kampong Thom and Preah Vihear to the west. Its northern boundary is Cambodia's international border with Laos. The Mekong River bisects the province. The province is mostly covered by forest, but logging and fishing put high pressure on the forest and fishery reserves.

The Pathet Lao was a communist political movement and organization in Laos, formed in the mid-20th century. The group was ultimately successful in assuming political power in 1975, after the Laotian Civil War. The Pathet Lao were always closely associated with Vietnamese communists. During the civil war, it was effectively organized, equipped and even led by the People's Army of Vietnam (PAVN). They fought against the anti-communist forces in the Vietnam War. Eventually, the term became the generic name for Laotian communists.

The kip is the currency of Laos since 1955. Historically, one kip was divided into 100 att (ອັດ). 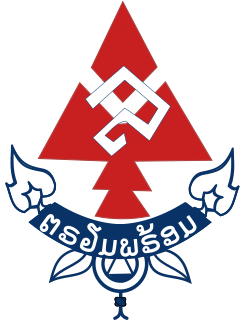 At the present time, there is no known Scouting program in Laos, one of only four of the world's independent countries that do not have Scouting.

The insurgency in Laos refers to the ongoing, albeit sporadic, military conflict between the Lao People's Army, and Vietnam People's Army opposed primarily by members of the former "Secret Army" or the Hmong people as well as various other ethnic lowland Lao insurgencies in Laos, who have faced governmental reprisals due to Royal Lao and Hmong support for the American-led, anti-communist campaigns in Laos during the Laotian Civil War—which is an extension to the war itself. The North Vietnamese invaded Laos in 1958-59 and supported the communist Pathet Lao. It continued on the day after the end of the civil war with the Pathet Lao's capture of the Laotian capital Vientiane, who overthrew the Royal Kingdom of Laos and established a new government known as the Lao People's Democratic Republic.

The Lao Football Federation is the governing body of football in Laos. It is responsible for the Laos national football team as well as national competitions like the Lao Premier League, Lao Division 1 League and the Lao FF Cup.

Laos is a Buddhist-majority nation with the officially recognised Muslim population approximately constituting 0.01% of the total population as of 2008 census. The majority of Laotian Muslims are Sunni. Laotian Muslims can be found in the capital, Vientiane, which has two mosques, as well as other urban areas such as Savannakhet and Oudomxay; the latter of which had a mosque constructed there in June 2016. Laotian Muslims are an ethnically diverse group, mainly consisting of ethnic Lao, Chin Haw, Chams, Tamils and Pashtuns, with interracial marriages being increasingly popular. They are generally engaged in trade, agriculture, cosmetics, clothing and business though some have attained official roles with the government.

The Cambodia national rugby union team, nicknamed the Koupreys, represents Cambodia in the sport of rugby union. The national team is administered by the Cambodian Federation of Rugby, which is part of the Asian Rugby Football Union and an associate member of the International Rugby Board.

Asia Rugby, formerly the Asian Rugby Football Union (ARFU), is the governing body of rugby union in Asia under the authority of World Rugby. Founded in 1968 by eight charter nations, the Union today has 31 member unions in countries across Asia, stretching from Kazakhstan to Guam.

Rugby union in Vietnam is a minor but growing sport, with the national team managed by Yale graduate Thao Do. 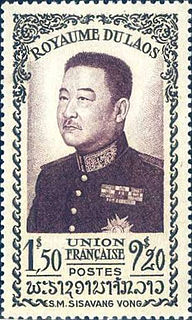 This is a survey of the postage stamps and postal history of Laos.

The Center for Public Policy Analysis (CPPA), or Centre for Public Policy Analysis, was established in Washington, D.C. in 1988 and describes itself as a non-profit, non-partisan, think tank and research organization. The CPPA is a non-governmental organization (NGO) focused on foreign policy, national security, human rights, refugee and international humanitarian issues.