Rugby union in Syria is a minor but growing sport.

Touch rugby was played in Damascus since 1982 after a notice had been put up in the British Council and after a Syrian student at the Council had acquired a rugby ball in Beirut. The first 'game' comprised two Syrian teenagers, one American and one British English teacher. From this small beginning the subsequent informal 'club' with largely the same nationalities mushroomed quickly and enthusiastically. Rugby had, of course, been played earlier in Syria under the French Mandate but had died out.

Rugby was introduced to Syria by the French and the British in 2003, and the Rugby starts to grow by inviting the Syrians to play and join the team to participate in region tournaments in the Middle East. The Syrian Rugby is powered by the Syrian Sport Federation in 2012 and named as the Syrian High Rugby Committee and appoints Mr. Ahmad Madani as president of the Syrian Committee. In 2013, three Syria rugby clubs are playing the Rugby Sport, Zenobians Rugby Club (204), Iust Palmerians(2015),aiu alphas(2015), and Victory (2012). The Zenobians are the first who started the rugby in Syria 2003 with 12 Europeans nationals and one Syrian from the oil industry, teaching and diplomatic communities in Syria.

The club in 2004 has seen the number of Syrian people interested in playing and watching rugby grow to 35 regular players in the club 80% of them Syrians.

The name of Zenobians is belonged to the first Syrian Queen in 250 AD who has the best army in the area. The Zenobians army controlled the whole Middle East starting from Egypt into Turkey; Zenobina (the Queen) Fought the Roman and captured in 272 AD. And sacrificed by retreating herself to the Roman Empire & asking them to let her people live. But the Queens army fought the Roman Army and released the Syrian city (Palmyra) from them.

The team is located in Damascus (the capital city of Syria), and they are working hard to encourage the sport to be known, loved, and played nationwide. With the progress and the determination of the club, by participating in the tournaments in the Middle East and hosting some of it in Syria, a Syrian national rugby union team is expected to emerge in the near future. The Zenobians Club (with cooperation with the AGRFU & IRB) has also a number of Syrians to coaching and the refereeing courses in the area. The club normally runs the Damascus internationals Sevens Tournament in October.

Three of Zenobians creators left to establish a new club to help improving the game in Syria and to level up and increase the competitive spirit of this sport.

Syrian Eagles Rugby Team was founded in 2007 but most of the players and the management of the team used to play with the Zebobians RFC since 2004. In 2007, the Syrians who used to play with the Zenobians RFC decided to establish the first Syrian Rugby Team with Syrian players and Syrian management. The most experienced players and lovers of the game started working to find the Syrian Eagles Rugby Team on 2006, and after a year of hardworking the first general meeting of the Syrian Eagles was set on 26/4/2007, and a good number of the sport supporters and lovers were invited to the meeting.

Most of the Syrian Eagles Rugby Team have played other tournaments when they used to play with the Zenobians RFC, such as Amman Tournament, Beirut Tournament, Egypt Tournament and Dubai International Sevens’ Tournament.

The team has good relations with various teams such as: Beirut Phoenicians, Al-Jamhour, Amman Guardians, Damascus Zenobians, Egypt Alexandrians, and other teams from United Arab Emirates, Beirut, Jordan, and Egypt.

• Head Coach: Mr. Weal Bawabejy, born in 1976, work in the field of office equipments and he is the owner and manager of Al-Nazire library store and copy center. In the field of rugby: He has a first level training certificate in rugby from the International Rugby Association in Beirut 2005 and he’s working on the second level. He was one of the founders of the Zenobians Rugby Team 2004 and a member of its committee (from 2005 to 2007). He participated in all the tournaments with the Zenobians Rugby team as a player and coach assistant (from 2004 to 2007) such as: 1- Damascus International Tournament (2004-2005-2006) 2- King Abdullah Cup in Amman (2005-2006) 3- Aqaba International Sevens in Aqaba (2004-2005) 4- Beirut International Tournament in Beirut (2004-2005-2006) 5- Cairo International Tournament in Cairo (2005-2006) 6- Dubai International Sevens in Dubai (2005-2006) as a team manager of the British Embassy Rugby Team in 2005 and as a player in 2006. He also participated in several friendly games in Syrian, Beirut, Jordan, Egypt and United Arab Emirates. Also, he is one of the founders of the Syrian Eagles Rugby Team.

• To make the Syrian Eagles Rugby Team the number one Rugby Team in Syria. • To provide a rugby focus for the community and to increase the supporters base of the sport.

• To become a well-known team in the Middle East region and compete in several tournaments. • To attract new talents to the team and make it a strong team competing over other well-known experienced teams in the area. • To be sponsored by a number of corporations trying to get recognition through the increase in popularity of Rugby in Syria. • To be an iconic sporting organization in Damascus and to be synonymous with success, innovation and community involvement. Victory Rugby Club is associated in 2012 as well as 5 of the Zenobians players are split and run the victory, and named Mr. Samer Tabbab as president and coach for the team. The team is still in the beginning and planning develop the Syrian Rugby.

With the exception of a railway system, Jordan has a developed public and private transportation system. There are three international airports in Jordan. The Hedjaz Jordan Railway runs one passenger train a day each way.

The Jordan national football team represents Jordan in international football and is controlled by the Jordan Football Association. Jordan have never qualified for the World Cup finals but have appeared four times in the Asian Cup and reached its quarter-final stage in the 2004 and 2011 editions.

Shane Mark Williams, is a Welsh rugby union player most famous for his long and successful tenure as a wing for the Ospreys and the Wales national team. He also played scrum-half on occasion. Williams is the record try scorer for Wales, and is fourth on the international list of leading rugby union test try scorers behind Daisuke Ohata, Bryan Habana and David Campese. He is Wales's most capped winger and is considered to be one of the greatest wingers of all time.

The Fiji National Rugby Sevens Team has competed in the World Rugby Sevens Series, Rugby World Cup Sevens and the Olympics. Fiji won the gold medal in the inaugural rugby sevens at the Summer Olympics in 2016 in Brazil, the country's first Olympic medal in any event, and repeated as Olympic champions in the 2020 Summer Olympics in Tokyo, defeating New Zealand. Thus Fiji is the sole nation to have won Olympic gold in the sport. They are the only country in the world to have won the Sevens Treble, the three major achievements in Sevens. They have won multiple World Rugby Sevens Series and Rugby World Cup Sevens.

The Boston Irish Wolfhounds Rugby Football Club is a rugby union team based in Boston, Massachusetts, US. The club competes in, and is governed by, the New England Rugby Football Union, the Northeast Rugby Union, and USA Rugby. In 2014 it joined the American Rugby Premiership.

Despite the nation being torn apart by civil war, Iraqi football in 2007 went as scheduled for the most part. Iraqi clubs participated in international competition, the Olympic team went through qualifications, and the national team played in different tournaments. No games by the national team or the Iraqi clubs were played in Iraq due to violence.

Calum Forrester is a Scottish rugby union coach who formerly played professionally for Glasgow Warriors. He also played for the Scotland 7s and Scotland A national teams.

Jaber Alwan is an Italian artist and painter of Iraqi descent. 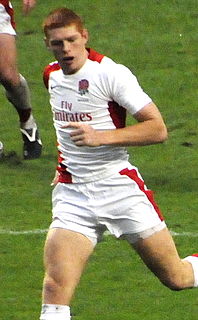 James Rodwell is an English professional rugby sevens player who was part of the national squad from 2008 to 2019. He ended his career with records as the Worlds most capped sevens player, having played in the most consecutive tournaments (69) and most tournaments (93) in the World Rugby Sevens Series.

Khaldoon Fuad Gharaibeh is a Jordanian cartoonist and a caricature artist,.