Rugby union in Saudi Arabia is a minor but growing sport, which has been played for several decades in the Kingdom. Many of the local rugby teams date back to the late 1970s.

Rugby is a developing sport in the kingdom. The current 'Saudi Rugby' organisation is licensed by the Saudi Government and a member of Asia Rugby Union. Its president is Prince Sultan Al Saud and the secretary general is Mr. Faleh al Bishi.

Due to the climate, Saudi rugby has been frequently played in extreme temperatures, with high temperatures or even on sand. Games are usually held in the evening for this reason.

Rugby union was introduced into Saudi Arabia by the British in the mid-twentieth century. In more recent times, an influx of western expat workers has meant that the sport has experienced a form of revival and for a while had a significant number of Saudi nationals playing.

Saudi Rugby Federation has no recognized clubs in the kingdom, however; there are currently 6 officially recognized teams in Saudi Arabia:

In November 2012 A national team, consisting only of Saudi nationals entered the West Asia 7's competition in Dubai. They finished 3rd overall with Lebanon taking the title.

Riyadh is the capital of Saudi Arabia and the largest city on the Arabian Peninsula. Located in the center of the an-Nafud desert, on the eastern part of the Najd plateau, the city sits at an average of 600 meters (2,000 ft) above sea level, and receives around 5 million tourists each year, making it the forty-ninth most visited city in the world and the 6th in the Middle East. Riyadh had a population of 7.6 million people in 2019, making it the most-populous city in Saudi Arabia, 3rd most populous in the Middle East, and 38th most populous in Asia.

Jeddah, also spelled Jedda, Jiddah or Jidda, is a city in the Hejaz region of Saudi Arabia and the country's commercial center. With a population of about 4,697,000 people as of 2021, Jeddah is the largest city in Makkah Province, the largest city in Hejaz, the second-largest city in Saudi Arabia, and the tenth-largest in the Middle East. Jeddah Islamic Port, located on the Red Sea, is the thirty-sixth largest seaport in the world and the second-largest and second-busiest seaport in the Middle East.

The Qassim Province, also known as the Qassim Region, and officially the Emirate of Al-Qassim Province, is one of the 13 provinces of Saudi Arabia. Located at the heart of the country near the geographic center of the Arabian Peninsula, it has a population of 1,370,727 and an area of 58,046 km². It is known to be the "alimental basket" of the country, for its agricultural assets. 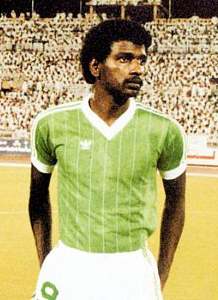 Majed Ahmed Abdullah is a Saudi Arabian former footballer who played for Al-Nassr and the Saudi national team. Abdullah is the all-time leading goalscorer for Saudi Arabia with 72 goals in 117 games. At club level, he is the record goalscorer for Al-Nassr and is the all-time top scorer of the Saudi Professional League. He was often referred to by his nickname "Arabian Jewel".

Al-Ahli Saudi Football Club is a Saudi Arabian professional football club based in Jeddah, that competes in the Saudi Pro League, the top flight of Saudi Arabian football. The club was founded in 1937.

Albaik is a Saudi fast food restaurant chain headquartered in Jeddah, Hejaz that primarily sells broasted and fried chicken with a variety of sauces. It is Saudi Arabia's largest restaurant chain. Albaik currently has trade name in 80 countries. 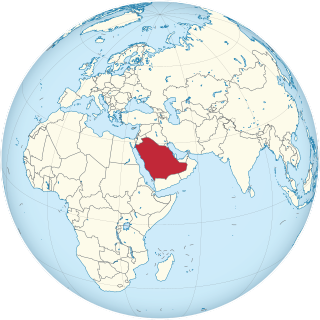 Articles related to Saudi Arabia include:

Sport in Saudi Arabia is an important part of Saudi Arabian culture and the country participates in many international sporting competitions. Football is a particularly popular sport and Saudi Arabia has won the Asian Cup on three occasions, while other sports such as cricket and basketball are also widely followed. Restrictions on women's sport in Saudi Arabia have been eased slightly in the 2010s but female participation in sport remains controversial.

Abdulaziz bin Turki Al Saud is a former Saudi racing driver and businessman as well as a member of the House of Saud. Prince Abdulaziz is the minister of sports appointed by King Salman with a royal decree on 25 February 2020.

Women's sport in Saudi Arabia has been a controversial topic for many years due to the suppression of female participation in sport by conservative Islamic religious authorities.