Rugby was originally introduced to Uganda by British colonists.

A notable fan of all Ugandan sports, the dictator Idi Amin had been very athletic in his time in the army. At 193 cm (6 ft 4 in) tall, he was the Ugandan light heavyweight boxing champion from 1951 to 1960, and also a swimmer and rugby player. He played rugby initially with the Nile R.F.C. and later for the Kobs R.F.C. in Kampala. Amin also said in one of his speeches,

"As you know I am a rugby player. I am second row, so I know how to push. I am very big. You don't want to push against me. And I also play wing three-quarter and I am very fast. I can run one hundred meters in nine point five seconds (applause). If you tackle me, you will try, and you will hurt only yourself. So to everyone who is a boxer, I say this, do what you have to do to knock out your opponent." [2]

Although on an official evaluation one of his officers once wrote of him:

"Idi Amin is a splendid type and a good [rugby] player, but virtually bone from the neck up, and needs things explained in words of one letter." [3] [4] [5]

There is a frequently repeated urban legend [6] [7] that he was selected as a replacement by East Africa for their match against the 1955 British Lions. The story is entirely unfounded, he does not appear on the team photograph or on the official team list [8] and replacements were not allowed in international rugby until 13 years after this event is supposed to have taken place. [9]

In July, 2010, Ugandan rugby hit the headlines, when one of two locations hit by terrorist attacks was Kyadondo Rugby Club in Nakawa, where state-run newspaper New Vision was hosting a screening of the 2010 FIFA World Cup Final. [10]

Uganda have been playing rugby since the late 1950s, playing their first international against Kenya in 1958. They have not yet qualified for the Rugby World Cup. Uganda plays in red.

Originally Uganda, along with Tanzania and Kenya was represented by the East Africa rugby union team. This consisted mostly of white settlers from Kenya, and the games tended to be hosted in Nairobi.

Uganda also has a women's team, and a rugby sevens team.

The main national competition of Uganda rugby is Nile Special Premier League, currently disputed by 10 teams. They are:

The second most important competition is the Nile Special Uganda Cup. The current holders are the Kobs who defeated the Heathens 19-9 in the final, which took place at 30 October 2010. 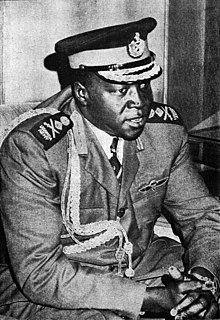 Idi Amin Dada Oumee was a Ugandan military officer who served as the president of Uganda from 1971 to 1979. He is considered one of the most brutal despots in world history.

Didier Camberabero, is a former French international rugby union player. He played as fly half. 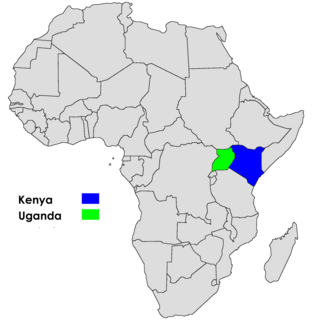 In 1955 the British Lions rugby union team toured Southern and Eastern Africa. The Lions drew the test series against South Africa, each team winning two of the four matches. They won the first test by a single point and the third by three points and lost the second and fourth matches by wider margins. As well as South Africa, the tour included a match against South West Africa, two games against Rhodesia and one versus East Africa.

Rugby union is a minor, but growing, sport in Denmark.

The Battle of Jinja was a battle of the Uganda–Tanzania War that took place on 22 April 1979 near and in the city of Jinja, Uganda between Tanzanian and allied Uganda National Liberation Front forces, and Ugandan troops loyal to Idi Amin. The Tanzanians and the UNLF men met slight resistance and captured Owen Falls Dam and the town of Jinja.

Ernest Obitre Gama is a former lieutenant colonel in the Uganda People's Defence Force and was the first soldier in Uganda to be appointed minister when Idi Amin appointed him to become his first Minister of Internal Affairs. He later was an ambassador for Yoweri Museveni to Japan, Italy, and Sudan.