Rugby in Malawi has frequently been haphazard, for example, Blantyre RFC once undertook a tour to Mauritius. Writing back to approve the tour, the Mauritian secretary added, "Please bring your own ball. We have lost ours." [1]

Although the Nyasaland Union (as it was then) was founded in 1922. Malawi has not joined the IRB. [2] Rugby has recently been reintroduced to Malawi with the game widely played in the South and the Center. The Rugby Football Union of Malawi has set up structures that have helped in getting Malawi back into the international fold with Rugby Africa.

As with many African and Asian countries, rugby has been linked to the fortunes of British colonialism. [2] Rugby was introduced by the British, and declined on independence. It also suffered from the problems of racial segregation. [2] This meant that it did not achieve the popularity it should have done amongst native black Malawians and is still dominated by whites and ex-pats mainly in and around Blantyre. [2]

A regular competition was held against Beira in the Woury Cup during the period. [2] Many of the competitions were against other British colonies in that part of Africa. [2]

World War II saw many players called away to the British Forces, and greatly depleted its resources.

However, the game was still played to a large degree in the period between the end of the war, and Malawi's independence. The Leslie Sevens were played for many years after 1948, and the Grainger Cup from 1946, was the league for Malawian clubs. [2]

The Nyasaland national rugby union team is now defunct, and there has not yet been a replacement Malawian team. It played some games in the 1930s. [2] With Malawi now back into the international fold, the first training squad was selected for tests against Swaziland and Lesotho in May 2015.

Malawi, officially the Republic of Malawi, is a landlocked country in southeastern Africa that was formerly known as Nyasaland. It is bordered by Zambia to the west, Tanzania to the north and northeast, and Mozambique surrounding on the east, south and southwest. Malawi spans over 118,484 km2 (45,747 sq mi) and has an estimated population of 18,143,217. Lake Malawi, also known as Lake Nyasa, takes up about a third of Malawi's area. Its capital is Lilongwe, which is also Malawi's largest city; the second largest is Blantyre, the third largest is Mzuzu and the fourth largest is its old capital Zomba. The name Malawi comes from the Maravi, an old name of the Nyanja people that inhabit the area. The country is nicknamed "The Warm Heart of Africa" because of the friendliness of the people.

Hastings Kamuzu Banda was the Prime Minister and later President of Malawi from 1964–1994. In 1966, the country became a republic and he became president. His rule has been characterized as a "highly repressive autocracy."

Music of Malawi has historically been influenced through its triple cultural heritage of British, African, and American music. Malawians have long been travelers and migrant workers, and as a result, their music has spread across the African continent and blended with other music forms. One of the prime historical causes of the Malawian musical melting pot was World War II, when soldiers both brought music to distant lands and also brought them back. By the end of the war, guitar and banjo duos were the most popular type of dance bands. Both instruments were imported. Malawians working in the mines in South Africa and Mozambique also led to fusion and blending in music styles, giving rise to music styles like Kwela. 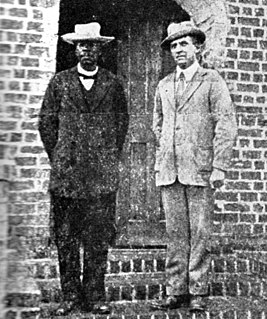 The Chilembwe uprising was a rebellion against British colonial rule in Nyasaland which took place in January 1915. It was led by John Chilembwe, an American-educated Baptist minister. Based around his Church in the village of Mbombwe in the south-east of the protectorate, the leaders of the revolt were mainly from an emerging black middle class. They were motivated by grievances against the colonial system including forced labour, racial discrimination, and new demands imposed on the indigenous population following the outbreak of World War I.

Henry Masauko Blasius Chipembere was a Malawian nationalist politician who played a significant role in bringing independence from colonial rule to his native country, formerly known as Nyasaland. From an early age Chipembere was a strong believer in natural justice and, on his return in 1954 from university in South Africa, he joined his country’s independence struggle as a nationalist strategist and spokesman. In 1957, considering that the independence movement need such a strong leader similar to Kwame Nkrumah, and considering himself too young for this task, he joined with other young nationalists in inviting Hastings Kamuzu Banda to return to Nyasaland as the movement's leader.

Since 1989, the British and Irish Lions have developed a regular 12-year cycle of tours visiting one of the following three Southern Hemisphere nations, in turn, every four years:

James Frederick Sangala was a founding member of the Nyasaland African Congress during the period of British colonial rule. Sangala was given the nickname "Pyagusi", which means "one who perseveres".

Cotton in Malawi is not indigenous to the country, but was introduced into warmer lowland areas no later than the 17th century. Production in the late pre-colonial and early colonial period was limited but, from the early 20th century, it has been grown mainly by African smallholders in the south of the country. For a brief period during the First World War, cotton was the most valuable export crop, and it has remained an important earner of foreign exchange.