Rugby union in Seychelles is a minor but growing sport.

The governing body is a member of the Confederation of African Rugby (CAR) but not of the International Rugby Board.

Rugby was first introduced to the Seychelles when it was a British colony. The first games were probably played by British sailors, and for a long while, expatriates and whites dominated the game in the colony.

The national ground comprises an area flattened from a massive landslide caused by a heavy rain from a cyclone. [1]

The Seychelles are a founder member of the Confederation of African Rugby (CAR), which was launched officially in January 1986, in Tunis, Tunisia. [2]

In 1981, Colonel Mike Hoare, an anti-Communist warlord from the Congo, attempted to stage a coup d'état, against Communist president France-Albert René, to try and reinstate James Mancham. Hoare got together a group of white mercenaries, and dubbed them "Ye Ancient Order of Froth Blowers" (AOFB) after a posh English social club of the 1930s. The mercenaries were to be disguised as South African rugby players taking a holiday. In order for the plan to work, he disguised the mercenaries as a rugby club, and hid AK-47s in the bottom of their luggage, as he explained in his book The Seychelles Affair:

We were a Johannesburg beer-drinking club. We met formally once a week in our favourite pub in Braamfontein. We played Rugby. Once a year we organised a holiday for our members. We obtained special charter rates. Last year we went to Mauritius. In the best traditions of the original AOFB we collected toys for underprivileged kids and distributed them to orphanages... I made sure the toys were as bulky as possible and weighed little. Rugger footballs were ideal. These were packed in the special baggage above the false bottom to compensate for the weight of the weapon. [3]

The plan was foiled when another passenger on their charter flight (uninvolved in the plot), who had boarded on a stop-over, was caught with illegally imported fruit. This meant that the Seychellois customs were going to commence checking every single bag, which was not something the mercenaries could afford. [3] As a result, the AK-47s were removed prematurely, and an armed skirmish ensued, in which the men hijacked an Indian jumbo jet to fly to South Africa. [4] [5] [6] Hoare and the other mercenaries spent several years in South African prisons for their troubles.

Seychelles, officially the Republic of Seychelles, is an archipelagic island country in the Indian Ocean at the eastern edge of the Somali Sea. It consists of 115 islands. Its capital and largest city, Victoria, lies 1,500 kilometres (932 mi) east of mainland Africa. Other nearby island countries and territories include Comoros, Mayotte, Madagascar, Réunion, and Mauritius to the south; as well as the Maldives and Chagos Archipelago to the east. With a population of roughly 94,367, it has the smallest population of any sovereign African country.

Thomas Michael Hoare, known as Mad Mike Hoare, was a British mercenary leader and adventurer known for his military activities in Africa and attempt to conduct a coup d'état in the Seychelles.

France-Albert René was a Seychellois politician who served as the second President of Seychelles from 1977 to 2004. He was nicknamed by Seychellois government officials and fellow party members as "the Boss". His name is often given as simply Albert René or F.A. René; he was also nicknamed Ti France. 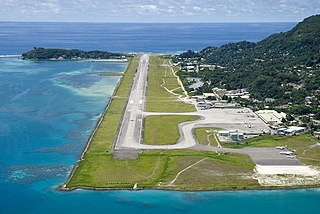 Seychelles International Airport, or Aéroport de la Pointe Larue in French, is the international airport of the Seychelles located on the island of Mahé near the capital city of Victoria. The airport is the home base and the head office of Air Seychelles and features several regional and long-haul routes due to its importance as an international leisure destination.

Royal Swazi National Airways Corporation was the national airline of the Kingdom of Swaziland. Headquartered in Mbabane with its operational base at Matsapha Airport near Manzini, the airline was founded in 1978. 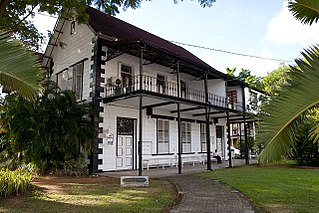 Arab navigators and other sailors doubtless knew of Seychelles for many centuries. However, the recorded history of Seychelles dates back to the fourth of the Portuguese India Armadas led by Vasco da Gama. On 15 March 1503, the scrivener Thomé Lopes noted the sighting of an elevated island, doubtless one the granitic islands and almost certainly Silhouette Island. The first recorded landing was by the men of the English East India Company ship Ascension, which arrived in Seychelles in January 1609. The islands were claimed by France in 1756. Seychelles remained uninhabited until the first settlers arrived on board the ship Thélemaque, which arrived on 27 August 1770. Captain Leblanc Lecore landed the first colonists, comprising 15 white men, eight Africans and five Indians. The Seychellois Creole language developed as a means of communication between the different races. The British frigate Orpheus commanded by Captain Henry Newcome arrived at Mahé on 16 May 1794. Terms of capitulation were drawn up and the next day Seychelles was surrendered to Britain. Following the fall of Mauritius to British forces, Captain Phillip Beaver of the Nisus arrived at Mahé on 23 April 1811 and took possession of Seychelles as a permanent colony of Britain. The Seychelles became an independent republic in 1976. Following a coup d'état, a socialist one-party state ruled the country from 1977 to 1993. The subsequent democratic Presidential elections were won by candidates of the same party.

Rugby union in Togo is a minor but growing sport.

Operation Flowers are Blooming was the name of an operation by the Indian Navy to help avert a threatened coup against the government of President France-Albert René in the Seychelles in 1986.

The 1981 Seychelles coup d'état attempt, sometimes referred to as the Seychelles affair or Operation Angela, was a failed South African–orchestrated mercenary takeover attempt in the country of Seychelles.