Rugby union in Burkina Faso is a minor but growing sport.

The governing body is affiliated to the Confederation of African Rugby, but not to the International Rugby Board.

Rugby union was introduced into Upper Volta, as it was then, by the French, who ruled the country for a number of years.

As with many minor rugby nations, the sport is centred on the national capital - Ouagadougou. Burkina Faso rates second last on the Human Development Index, which means it is extremely poor, and lacks the infrastructure that would improve its rugby standing.

The national coach of the Burkina Faso rugby team is Laurent Stravato. They just won the African cup of 7s in 2014.

Like many African countries, the historical connection with France is a mixed blessing. For a number of years, Burkinabé rugby players would leave to play there, which deprived rugby in Burkina Faso of any real competition. As an example, one of the most notable Burkinabé players was Fulgence Ouedraogo, who played for the France national rugby union team, but would have qualified for the Burkina Faso national rugby union team. [1] Ouedraogo left Burkina Faso at an early age, and started playing rugby at the age of 6, meeting his MHRC teammate François Trinh-Duc, at the Pic-Saint-Loup rugby school near Montpellier. [2]

Although Burkina Faso's women have not yet played test match rugby, they have been playing international sevens rugby since 2006. (Current playing record).

Burkina Faso, officially the People's Republic of Burkina Faso, is a landlocked country in West Africa. It covers an area of around 274,200 square kilometres (105,900 sq mi) and is surrounded by six countries: Mali to the north and west; Niger to the east; Benin to the southeast; Togo to the southeast; Ghana to the south; and Ivory Coast to the southwest. The July 2019 population estimate by the United Nations was 20,321,378. The country's official language of government and business is French. Roughly 50% of the population speaks the Mossi language natively. Formerly called the Republic of Upper Volta (1958–1984), the country was renamed "Burkina Faso" on 4 August 1984 by erstwhile President Thomas Sankara. Its citizens are known as Burkinabé. Its capital is Ouagadougou.

Gérard Kango Ouédraogo was a Burkinabé statesman and diplomat who served as Prime Minister of Upper Volta from 13 February 1971 to 8 February 1974. He was subsequently President of the National Assembly of Burkina Faso from October 1978 to November 25, 1980.

Articles related to Burkina Faso include: 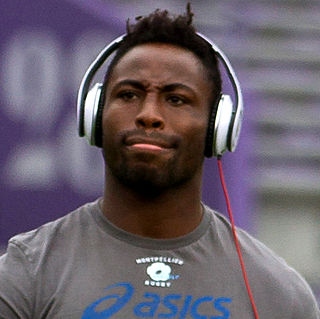 Fulgence Ouedraogo is a French rugby union player. He currently plays for Montpellier Hérault RC in the Top 14 championship. His usual position is as a flanker.

Football is the most popular sport in Burkina Faso. And the national association can look back on recent developments with a great deal of pride. Reaching the semi-finals of the African Cup of Nations on home soil in 1998, qualifying for the FIFA World Youth Championship in the UAE in 2003, and appearances at two final competitions of the CAF U-17 Cup, as well as third place at the FIFA U-17 World Championship in Trinidad & Tobago in 2001 are Burkina Fasos outstanding achievements at international level. The nations most famous players include Kassoum Ouegraogo, nicknamed Zico, who had his most successful seasons with Espérance de Tunis before ending his career in Germany, Siaka Ouattara, who spent his entire career with Mulhouse in France, and Moumouni Dagano, who was voted best African player in Belgium in 2001, when he played for the Belgian side Genk. He later went on to play for the French side Guingamp before transferring to another French team, FC Sochaux in 2005. Burkina Faso received an unexpected free pass into the group stage of the 2006 FIFA World Cup qualification process, when their opening round contestant, the Central African Republic, withdrew from the competition. This gave the West Africans, who were at that stage ranked 14th on the continent, the certainty that their name would be in the hat when the Preliminary Draw for the 2006 FIFA World Cup in Germany was made. They got off to a flying start, beating Ghana 1-0 in their opening match and laying down a marker for their Group 2 adversaries South Africa, Cape Verde Islands, Congo DR and Uganda. The victory train began to come off the rails with two defeats to Cape Verde, and with a record of two wins and three losses, Burkina Faso were up against it at the half-way stage. Frenchman Bernard Simondi took over the coaching reins from Ivica Todorov and made the team harder to beat at home, even recording wins over South Africa and Congo DR, but in the end it was not quite enough, and the likes of Abdoulaye Cisse, Moumouni Dagano, and Wilfred Sanou went no further in the competition.

Herve Xavier Zengue or simply Xavier is a Cameroonian football player who last played for FC Terek Grozny. He holds Burkinabe citizenship as he is married to a Burkinabe women.

Rugby union in Benin is a minor but growing sport.

Rugby union in Chad is a minor but growing sport.

Rugby union in the Democratic Republic of the Congo is a minor but growing sport.

Rugby union in Niger is a minor but growing sport.

Ouédraogo, sometimes Ouedraogo, is a surname taken from the French spelling of Wedraogo, semi-legendary son of princess Yennenga and founder of the Mossi Kingdoms. 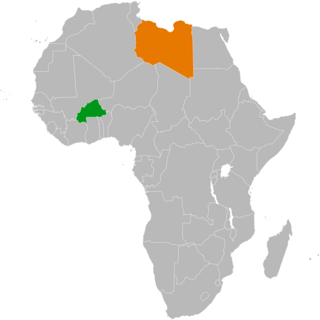 Burkina Faso–Libya relations refers to the current and historical relationship between State of Libya and the Republic of Burkina Faso. Libya maintains an embassy in the Burkinabé capital of Ouagadougou, and Burkina Faso one in the Libyan capital of Tripoli.

Alice Ouédraogo is a Burkinabé public health official. A lawyer by profession she has worked extensively with the International Labour Organization (ILO). Ouédraogo was ILO representative to Cameroon and Ethiopia and also director of its Central Africa region. She is currently head of the ILO HIV/AIDS programme and works to reduce the transmission of HIV and increase the number of people in treatment.