The UCI Continental Circuits are continental circuits for a series of road bicycle racing competitions since 2005. The five circuits are a tier below the UCI World Tour. Both the World Tour and the Continental Circuits comprise a series of races in which various cycling teams compete regularly. It was introduced by the Union Cycliste Internationale (UCI) to provide an adequate and realistic context in order to encourage the expansion of cycling, everywhere in the world. 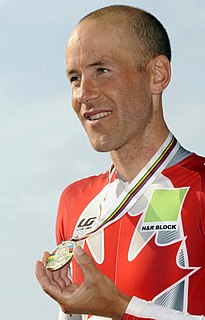 Svein Tuft is a Canadian road bicycle racer, who currently rides for UCI Professional Continental team Rally UHC Cycling. Tuft was the winner of the 2006–07 UCI America Tour, and is a two-time national road race champion, and an eleven-time national time trial champion.

An Post–Chain Reaction is a UCI continental professional cycling team registered in the Republic of Ireland, based at the Sean Kelly Academy in Merchtem, Flanders. The team participates on the UCI Europe Tour. The squad is managed by Kurt Bogaerts and Sean Kelly with directeur sportif Andy Vanhoudt. The team disbanded at the end of the 2017 season, after they failed to find sponsorship. It hopes to compete in the 2019 season, if sponsorship is secured.

Team Team Differdange–Geba is a continental cycling team, based in Luxembourg. The team participates in UCI Continental Circuits races. 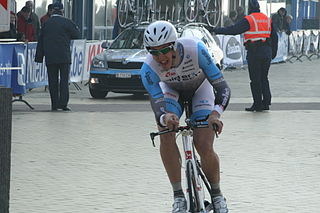 Keven Lacombe is a Canadian professional racing cyclist. He was also an ice hockey player for Drummondville Voltigeurs of the Quebec Major Junior Hockey League.

Mitchelton–Scott is an Australian professional road race cycling team. Launched in January 2011, it competes at UCI WorldTeam level. The team is under the management of Andrew Ryan and Shayne Bannan with Neil Stephens and Matt White as Sporting Directors. The team ride Scott bikes, wear Giordana Cycling clothing, and wear Bollé eyewear. The team has financial backing from Australian businessman Gerry Ryan who owns Jayco Australia. 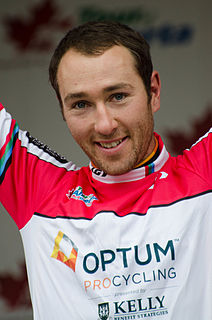 Ryan Roth is a Canadian road bicycle racer riding for the X-Speed United Continental Team. Prior to becoming a road cyclist, Roth also competed in the junior levels in mountain-biking and cyclo-cross; he was national junior cyclo-cross champion in 2000.

Rally UHC Cycling is a UCI Professional Continental team, based in the United States. The team has been directed by Jonas Carney since its inception. Notable riders who have previously ridden for the team include Ben King, Chad Haga, Carter Jones, Phil Gaimon, Michael Woods, David Veilleux, Matthew Busche, Ryan Anderson, Mike Creed and Mike Friedman. 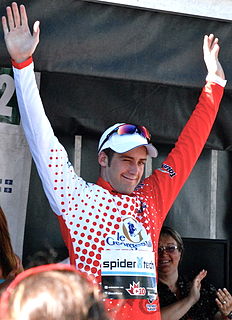 Hugo Houle is a Canadian professional cyclist, who currently rides for UCI WorldTeam Astana. In 2012, Houle won the general classification of the Tour de Québec as well as a stage while he was riding for SpiderTech–C10. Houle acts mainly as a domestique for the French outfit. In 2015, he participated to his first Grand Tour, the Giro d'Italia. He won the 2015 Canadian Time Trial Championship over Ryan Roth and Christian Meier.

San Luis Somos Todos is a continental cycling team based in Argentina that participates in UCI Continental Circuits races. The team was founded in 2012.

Israel Cycling Academy is a UCI Pro Continental team founded in 2015 and based in Israel. It participates in UCI Continental Circuits races. The team was launched in November 2014 by a team with the aim of developing young cyclists, especially from Israel.