Spiderbait are an Australian alternative rock band formed in Finley, a small town in rural New South Wales, in 1991 by bass guitarist Janet English, singer-drummer Mark Maher, and guitarist Damian Whitty. In 2004 the group's cover version of the 1930s Lead Belly song "Black Betty" reached number one on the ARIA Singles Chart. They have five top 20 albums: The Unfinished Spanish Galleon of Finley Lake (1995), Ivy and the Big Apples (1996), Grand Slam (1999), Tonight Alright (2004), and Greatest Hits (2005). The group have won two ARIA Music Awards with the first in 1997 as 'Best Alternative Release' for Ivy and the Big Apples and the second in 2000 as 'Best Cover Art' for their single "Glokenpop". Since late 2004, the band has been on hiatus to concentrate on solo projects and their personal lives—although periodically returning for occasional gigs. In November 2013 the band released their first studio album in nine years, Spiderbait. 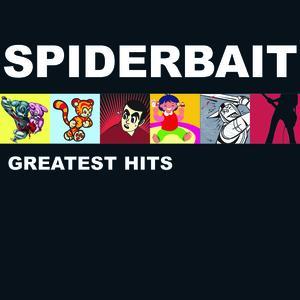 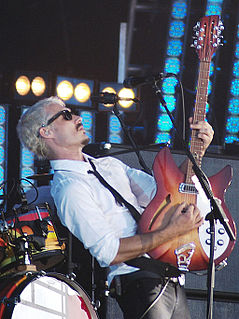 Daniel Paul Johns is an Australian musician, singer, and songwriter. Best known as the former front man of the rock band Silverchair, Johns is also one half of The Dissociatives with Paul Mac and, in 2007, was ranked at number 18 on Rolling Stone's list of The 25 Most Underrated Guitarists. 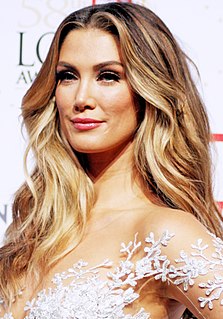 Delta Lea Goodrem is an Australian singer, songwriter, and actress. Born and raised in Sydney, New South Wales, she enrolled in dancing, acting, singing and piano classes at a young age. She began her career as a child actress, starring in various television shows. She rose to prominence in 2002 playing a shy school girl called Nina Tucker in the Australian soap opera Neighbours.

The Wiggles are an Australian children's music group formed in Sydney, New South Wales, in 1991. Since 2012, the group members are Anthony Field, Lachlan Gillespie, Simon Pryce, and Emma Watkins. The original members were Field, Phillip Wilcher, Murray Cook, Greg Page, and Jeff Fatt. Wilcher left the group after their first album. Page retired in 2006 due to ill health and was replaced by understudy Sam Moran, but returned in 2012, replacing Moran. At the end of 2012, Page, Cook, and Fatt retired, and were replaced by Gillespie, Pryce, and Watkins. Cook and Fatt retained their shareholding in the group and all three continued to have input into its creative and production aspects. 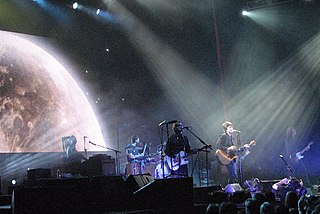 Powderfinger were an Australian rock band formed in Brisbane in 1989. From 1992 until their break-up in 2010 the line-up consisted of vocalist Bernard Fanning, guitarists Darren Middleton and Ian Haug, bass guitarist John Collins, and drummer Jon Coghill. The group's third studio album Internationalist peaked at No. 1 on the ARIA Albums Chart in September 1998. They followed with four more number-one studio albums in a row: Odyssey Number Five, Vulture Street, Dream Days at the Hotel Existence, and Golden Rule. Their Top Ten hit singles are "My Happiness" (2000), "(Baby I've Got You) On My Mind" (2003), and "Lost and Running" (2007). Powderfinger earned a total of eighteen ARIA Awards, making them the second-most awarded band behind Silverchair. Ten Powderfinger albums and DVDs certified multiple-platinum, with Odyssey Number Five – their most successful album – achieving eightfold platinum certification for shipment of over 560,000 units.

Tu-Plang (1996) was the first album released by Regurgitator after making two EPs. The band chose to record the album in Bangkok, Thailand, to the quandary of its label, Warner Music, which was uncertain as to what terms A&R executive Michael Parisi had contracted. Ely later said, "We didn't want to do it in just any old place, so we had a tour in Europe and Japan booked and our drummer Martin said, 'let's stop in Thailand on the way and check out some studios,' so we did and we found this place."

Craig Mathieson is an Australian music journalist and writer. His books include, Hi Fi Days (1996), The Sell-In in (2000) and the 100 Best Australian Albums in 2010, with Toby Creswell and John O'Donnell

Dappled Cities are an indie rock band from Sydney, Australia. 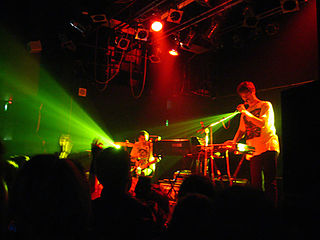 The Presets are an Australian electronic music duo of Julian Hamilton and Kim Moyes. Formed in 2003 and signed to Modular Records, The Presets released two EPs in advance of their debut album, Beams, released in 2005 to positive critical response. After two years of touring, including as the Australian support for Daft Punk, the band's 2008 release, Apocalypso, debuted at number one on the ARIA Albums Chart, and went on to win six awards at ARIA Awards 2008, including Album of the Year. 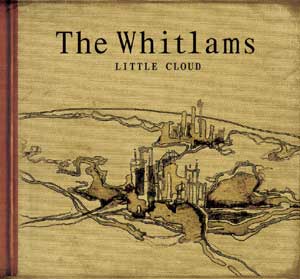 Little Cloud is the sixth studio album by Australian band The Whitlams, released by Black Yak through Warner in 2006. It debuted at number four on the ARIA Albums Chart.

Melissa Morrison Higgins is an Australian singer-songwriter, musician and actress. Her Australian number-one albums are The Sound of White (2004), On a Clear Night (2007) and The Ol' Razzle Dazzle (2012), and her singles include "Scar", "The Special Two", "Steer" and "Where I Stood". Higgins was nominated for five ARIA Music Awards in 2004 and won 'Best Pop Release' for "Scar". In 2005, she was nominated for seven more awards and won five. Higgins won her seventh ARIA in 2007. Her third album, The Ol' Razzle Dazzle, was released in Australia in June 2012. As of August 2014, Higgins' first three studio albums had sold over one million units. 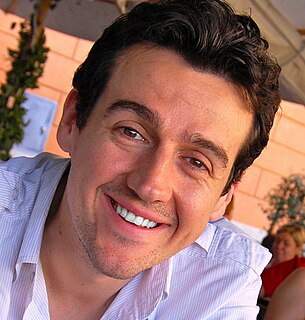 Samuel Alexander Moran is an Australian entertainer best known for having been a member of the children's band The Wiggles from 2006 to 2012. He was born in Sydney and raised in Wagga Wagga. He is the host of the children's television series Play Along With Sam.

Kate Miller-Heidke is an Australian singer-songwriter and actress. Although classically trained, she has followed a career in alternative pop music. She was signed to Sony Australia, Epic in the US and RCA in the UK, but is now an independent artist. She will represent Australia in the Eurovision Song Contest 2019 in Tel Aviv, Israel.

Tinpan Orange are an Indie folk band from Melbourne, Australia. They formed in 2005 after they were discovered busking on the streets of Darwin, Australia. The band is a trio of musicians, made up of Emily Lubitz as the lead singer and guitarist, with her brother Jesse Lubitz as guitarist and Alex Burkoy as a violinist. The band's style is heavily stylised folk music, combined with romanticism.

Native Ryme Syndicate is a Brisbane based rap group. Native Ryme Syndicate won a Deadly award in 1998 for Most Promising New Talent. They were the first Australian urban music group to the elite music festivals and have played with Spiderbait, Regurgitator and 28 Days as well as at the Big Day Out and Livid festivals. Named as one of the best unknown rap/hip-hop music groups in the World by Grammy Award winning US group Naughty By Nature. The group are known today as Native Ryme. Native Ryme are releasing their debut full length album in 2013 after 19 years since formation.

Goin' Your Way is a live album collaboration recorded by Neil Finn and Paul Kelly during a performance at the Sydney Opera House on 10 March 2013. It was released on 8 November as a stand-alone 2× CD, Blu-ray or DVD; or in a Limited Edition Deluxe version with all three formats. From 18 February to 18 March, Finn and Kelly undertook a joint tour of Australia, they performed tracks from their respective careers, including re-interpreting each other's work. The CD album peaked at No. 5 on the ARIA Albums Chart while the DVD reached No. 1 on the related Music DVD Chart.

Black Rabbits is the seventh studio album by Australian post-grunge band Grinspoon, which was released on 28 September 2012. Its title is Cockney rhyming slang for "bad habits", which relates to their reputation as being "a hard rocking, harder living band from Lismore, NSW, who emerged at the turn of the millennium with the same never-say-no ethic of Seattle's toughest grunge bands."