The Winnipeg Braves were founded in 1956 and affiliated with the Winnipeg Warriors (minor pro) of the Western Hockey League (minor pro). The Braves played regular season games at Winnipeg's Olympic Rink and won 2 Turnbull Cup Championships as Manitoba Junior Champions (1959 and 1965).

The Winnipeg Warriors were a minor league hockey team that played in the Western Hockey League from 1955 to 1961. Owned by Winnipeg's prominent Perrin family, the Warriors represented the return of professional hockey to Winnipeg after a 27-year absence. In 1955, the Warriors Club was the first tenant in the brand-new Winnipeg Arena. The grand opening of Winnipeg Arena occurred on October 18, 1955, during the Warriors' WHL season opening game against the Calgary Stampeders (hockey) club. The ceremonial faceoff, conducted by John Draper Perrin, Sr., President of the Warriors, occurred before a standing room crowd of 9,671 fans, the largest in WHL history. Captained by Fred Shero and including players such as Hockey Hall of Fame member Bill Mosienko, as well as Eric Nesterenko, Danny Summers, Gary Aldcorn, Cec Hoekstra, Fred Burchell, Bill Burega, Barry Cullen, Mickey Keating, Eddie Mazur and Ed Chadwick, the 1955 - 56 Warriors, managed by J. D. (Jack) Perrin, Jr., Vice President and General Manager and coached by Alf Pike, went on to win the Edinburgh Trophy, emblematic of the World's Minor Professional Hockey Championship. After six seasons, due to financial trouble relating to their long WHL traveling distances and uncompetitive rents levied by Winnipeg Enterprises, owners of Winnipeg Arena, Warriors owner Jack Perrin asked for a leave of absence from the WHL, which was granted. However, the Warriors never returned to the league.

The Olympic Rink was an ice hockey venue in Winnipeg, Manitoba, Canada that was located at the corner of Church Avenue and Charles Street in Winnipeg's North End. An apartment block, the "Olympic Towers", today stands on the site.

The 1958-59, Braves won the Abbott Cup as Western Canadian Junior ‘A’ Champions, and were the last team from Winnipeg to win the Memorial Cup as National Champions. Under the leadership of manager Bill Addison and coach Bill Allum, the Braves defeated the Peterborough Petes coached by 25-year-old Scotty Bowman. In the championship series, the Petes won the first game 5-4, and the Braves came back to win four straight games 5-2, 5-2, 5-3 and 6-2. The final game of the series was played in Brandon, Manitoba due to the Shrine Circus appearing at Winnipeg Arena. The team included future NHL'ers Ted Green and Ernie Wakely. 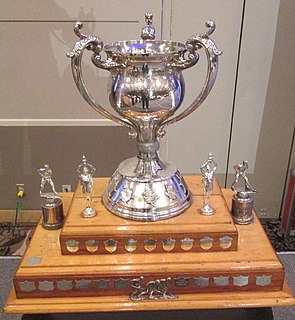 Gary Gunnar Bergman was a Canadian professional ice hockey player. A defenceman, Bergman played in the NHL, mostly for the Detroit Red Wings. He was also a part of Team Canada in the 1972 Summit Series.

Edward Joseph "Terrible Ted" Green is a Canadian former professional ice hockey coach and player. Green played defence for the NHL Boston Bruins and the WHA New England Whalers and Winnipeg Jets, and was noted for his physical play. Green has served as a head coach with the Edmonton Oilers, and as an assistant coach with the Oilers and the New York Rangers.

Prior to the 1966-67 season, the team moved to St. James and changed its name to the St. James Braves.

During the summer of 1967, a community-minded sports group purchased the St. James Braves from Ben Hatskin. The team relocated to the brand new St. James Civic Centre, where they played as the St. James Canadians. 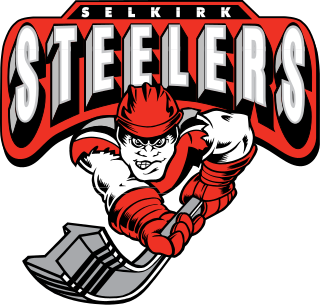