Stanley Greaves (born 1934) [1] is a Guyanese painter and writer who is one of the Caribbean's most distinguished artists. Writing in 1995 at the time of a retrospective exhibition to celebrate Greaves's 60th birthday, Rupert Roopnarine stated: "It may be that no major Caribbean artist of our time has been more fecund and versatile than Stanley Greaves of Guyana." [2] Greaves himself has said of his own creativity:

I still don't talk about myself as making art! Other people do that. I am a maker of things. In the early days, I found empty matchboxes, cigarette boxes, bits of string, wire, empty boot-polish tins, whatever, and made things. Drawing was just another activity, and it still is. My favorite medium is still wood, of course. My hitherto secret preoccupation with writing poems, which has now come to light, is another form of making. Recently at the University of Birmingham, where I did a reading, I was asked if the paintings influenced the poetry, and I said, "No, they come from the same source." [3]

Greaves was born in a "tenement yard" on Carmichael Street, Georgetown, Guyana. He studied art in Guyana with Edward Burrowes in the Working Peoples' Art Class (1948–61) [1] and from 1963 to 1968 attended University of Newcastle-upon-Tyne in the UK, where he studied painting, majoring in sculpture for the B.A.Hons degree in Fine Art. He also earned a Diploma in Art Teaching. He was a Fulbright Scholar from 1979 to 1980 at Howard University, where he did printmaking and sculpture for the MFA degree.

In Guyana, Greaves taught at Sacred Heart Primary, St. Stanislaus College (his old schools), Berbice High School, Queen's College, from 1971 to 1975, and was the first Head of the Division of Creative Arts at the University of Guyana from 1975 to 1986. He left Guyana in 1987 and has been resident in Barbados since that time. He now resides in North Carolina.

Before and while in Barbados he served on the first art and craft panel designing the syllabus for the Caribbean Examinations Council and has been a part-time tutor at the Barbados Community College. He was elected a Distinguished Honourable Fellow at University of the West Indies Cave Hill Campus in 2003 and it was extended. [4]

Work as an artist

As an artist Greaves works mainly in painting, but has also produced sculpture, drawings, prints and pottery. He was awarded the Guyana national honour of the Golden Arrow of Achievement in 1975. He has exhibited at national level, winning several prizes, and has had one-man shows. He represented Guyana twice at the São Paulo Biennial and once at the Medellin Bienniale in Colombia. He has had major exhibitions in the UK (in 1999 his work was shown in the landmark exhibition curated by Gottfried Donkor, The Elders, alongside that of Brother Everald Brown of Jamaica) [3] and elsewhere in Europe, as well as throughout the Caribbean. He won a gold medal for painting in the Barbados entry at the Santo Domingo Bienniale. He has been exhibiting since arriving in North Carolina, USA, in 2008, at the Fayetteville Museum of Art, Moruca Gallery Washington, the University of Fayetteville, the State University of North Carolina. and Claflin University in South Carolina, the OAS in Washington, and Castellani House in Guyana. [5] In 2014 he celebrated his 80th birthday with an exhibition of 24 paintings based on his reading of the novels of the renowned Guyanese author Wilson Harris.The paintings were also shown at the OAS in 2015. He also won the gold medal for painting in the 2017 Guyana Visual Arts and Craft Exhibition where he declared it was his last showing in that exhibition. 2018 he showed photographs of 14 sculptures -The El dorado Series sponsored by Diamond distilleries. The actual works were shown at the OAS 2019.

Over the years his paintings have appeared on the cover of several books. He has also done pen and ink illustrations for poems of Martin Carter, Ian Mc David, both distinguished Poets of the Caribbean.

His collection of poems Horizons, published by Peepal Tree Press in 2002, won the Guyana Prize for Literature in the first book of poems category. [6] His most recent collection is The Poems Man (Peepal Tree Press, 2009). He co-authored, with Anne Walmsley, Art in the Caribbean: An Introduction, published in 2010 by New Beacon Books. "Haiku" is his third book. Each contains pen and ink drawings. He has also collaborated with Akima Mc Pherson of the University of Guyana to write a series of articles in the Sunday Stabroek on individual works in the Guyana National Collection.

In addition to being a painter and writer, Greaves also plays the classical guitar, self taught in the beginning until afforded the opportunity of studying for a year with Cuban guitarist Francisco Gonzalez, who was on a cultural exchange program and four years with Pam Frost of Barbados, during which time he'd composed several works for the guitar.

Greaves was for a time married to the painter Alison Chapman-Andrews. [7]

Guyanese literature covers works including novels, poetry, plays and others written by people born or strongly-affiliated with Guyana. Formerly British Guiana, British language and style has an enduring impact on the writings from Guyana, which are done in English language and utilizing Guyanese Creole. Emigration has contributed to a large body of work relating the Guyanese diaspora experience.

Martin Wylde Carter was a Guyanese poet and political activist. Widely regarded as the greatest Guyanese poet, and one of the most important poets of the Caribbean region, Carter is best known for his poems of protest, resistance and revolution. He played an active role in Guyanese politics, particularly in the years leading up Independence in 1966 and those immediately following. He was famously imprisoned by the British government in Guyana in October 1953 under allegations of "spreading dissension", and again in June 1954 for taking part in a PPP procession. Shortly after being released from prison the first time, he published his best-known poetry collection, Poems of Resistance from British Guiana (1954).

Ian McDonald is a Caribbean-born poet and writer who describes himself as "Antiguan by ancestry, Trinidadian by birth, Guyanese by adoption, and West Indian by conviction." His ancestry on his father's side is Antiguan and Kittitian, and Trinidadian on his mother’s side. His only novel, The Humming-Bird Tree, first published in 1969, is considered a classic of Caribbean literature.

Stewart Brown is an English poet, university lecturer and scholar of African and Caribbean Literature.

Mark McWatt is a Guyanese writer and former professor of English at University of the West Indies.

Rupert Roopnaraine is a Guyanese cricketer, writer, and politician. Roopnaraine served as Minister of Education of Guyana between 2015 and 2017.

Aubrey Cummings was a renowned Guyanese musician and singer, who in 1978 migrated to Barbados. He was also an artist.

Aubrey Williams was a Guyanese artist. He was best known for his large, oil-on-canvas paintings, which combine elements of abstract expressionism with forms, images and symbols inspired by the pre-Columbian art of indigenous peoples of the Americas.

Ras Akyem is a Barbadian painter. A graduate of the Edna Manley School of Art in Jamaica, his work is heavily influenced by the Rastafari movement and bears resemblance to the paintings of Jean-Michel Basquiat. His work is frequently exhibited alongside that of Ras Ishi Butcher.

Donald Cuthbert Locke was a Guyanese artist who created drawings, paintings and sculptures in a variety of media. He studied in the United Kingdom, and worked in Guyana and the United Kingdom before moving to the United States in 1979. He spent his last twenty years, perhaps the most productive and innovative period of his life, in Atlanta, Georgia. His eldest son is British sculptor Hew Locke.

Edward Rupert Burrowes was a Guyanese artist and art teacher who founded the Working People's Art Class (WPAC), the first established art institution in Guyana. The E R Burrowes School of Art, an undergraduate institution accredited by the University of Guyana, is named after him.

The Working People's Art Class (WPAC), founded by Edward Rupert Burrowes in 1945, was the first established art institution in the colony of British Guiana, now the country of Guyana. A number of well-known Guyanese artists were taught at the WPAC.

Emerson Augustus Samuels was a prominent Guyanese graphic artist. He is perhaps best known for his portrait of Guyana President Forbes Burnham, completed in August 1984, which hangs in the Parliament Chamber.

Oswald ("Ossie") Hussein is a Guyanese artist of Lokono (Arawak) descent. Though he occasionally works in other mediums, he is best known for his wooden sculptures which explore various dimensions of Arawak Amerindian culture and tradition. Hussein first achieved national recognition when he won first prize in Guyana's National Exhibition of the Visual Arts in 1989, and since that time he has gone on to become one of Guyana's most celebrated artists and a leading figure in Guyanese sculpture. Along with his half-brother, George Simon, he is one of the most prominent members of the Lokono Artists Group. His work has been displayed in numerous exhibitions in Guyana, Barbados, and the United Kingdom. 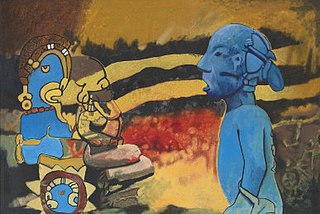 The Olmec-Maya and Now (1981–1985) is a series of large, oil-on-canvas paintings by Aubrey Williams. The series grew out of Williams' enduring interest in pre-Columbian cultures of the indigenous peoples of the Americas. It explores parallels between Olmec and Maya civilizations and contemporary global culture, focusing in particular on the threat of rapid demise and self-destruction.