Stebonheath Park ( Welsh: Parc Stebonheath) is a multi-use stadium in Llanelli, West Wales with a capacity of 3,700. It is primarily used as a football ground and is the home of Llanelli Town A.F.C.. It was also used for athletics and Llanelli Amateur Athletic Club (Llanelli AAC) were based at the stadium. It is owned by Llanelli Town Council. From 2015 Raiders RL club used the stadium for their debut season in the Conference League South but are now based at the park on a permanent basis as they compete in the RFL professional tier as the only professional Rugby League team in South Wales.

Stebonheath Park has been used as a football ground since 1920. [1] It almost hosted League football in the 1930s but the club lost out coming second in the vote. At the time the ground had a large wooden grandstand, a covered end terrace and a large bank on the south side, and it could easily have been developed into a Third Division ground.[ citation needed ] The stand was subsequently demolished and the ground re-shaped to allow the building of an adjacent by-pass road.[ citation needed ]

Stebonheath Park was home to the Wales national rugby league team in the 1930s. Here Wales were crowned European Champions, after defeating England 17–9, on 10 November 1938. Frank Whitcombe made his debut for Wales in this game.

The stadium has been owned by Llanelli Town Council since 1977. The council undertook major redevelopments of the stadium which included floodlighting, a new 700 seater main stand, new terracing, a function room social club as well as all-weather training facilities for the athletics club. [1] [2] In July 2008, a new open seated stand was built on existing terracing along one side of the ground with about 300 seats.[ citation needed ]

Around the pitch is a narrow 400 metre running track with four lanes on each straight. It is the narrowest 400m track in the United Kingdom. [3]

On 28 February 2006 the stadium hosted an international match between Wales Under-21s and Northern Ireland Under-21s, with the Northern Irish side winning 1–0. [4]

On 31 October 2008 the stadium hosted a Victory Shield match between Wales under-16 and England under-16 which was shown live on Sky Sports. [7]

Although the stadium was the home of Llanelli AFC, they used to play major games at Stradey Park which had a capacity of 10,800. Stradey Park was demolished in late 2008 and an option for major games was the then newly built 14,340 capacity Parc y Scarlets.

Lanelli AAC, which was formed in 1978, is based at the stadium and caters for all standards of track and field athletics, cross-country running and road running. [9]

West Wales Raiders RL relocated to Llanelli in 2014 and struck up a deal to play at the stadium with the local council in preparation for the debut season in the Conference league south where they finished 3rd. The West Wales Raiders Rugby League Club previously known as Raiders RL are the most established Rugby league club[1] in West Wales formed in January 2015.[2] Formerly called Gwendreath Valley Raiders they moved to Llanelli when the club gained entry into the Conference League South which is level 4 of the Rugby League system. In 2017, Andrew Thorne purchased the semi professional League 1 club South Wales Ironmen, relocating the club immediately to Llanelli. The Ironmen will rebrand as West Wales Raiders from 2018 onwards.

The Raiders first ever match was an away friendly against Aberystwyth University in February which they won 72–6. Their first league match was a home derby win against the defending champions Valley Cougars 34–6, captain Alan Pope scoring the club's first try. The game was watched by over 370 spectators.[ citation needed ]

The record attendance for football at Stebonheath Park is 1,410 for a Welsh Premier League football match between Llanelli and Barry Town on 14 January 2000. [10]

The biggest ever crowd at Stebonheath Park was for a Rugby League match on 23 November 1935 where Wales beat France in front of a crowd of over 25,000 fans.[ citation needed ]

Llanelli is the largest town in Carmarthenshire and the preserved county of Dyfed, Wales. Located on the Loughor estuary 10.5 miles (16.9 km) north-west of Swansea and 12 miles (19 km) south-east of the county town, Carmarthen, it was a market town that industrialised in the early 19th century as the global centre for tinplate production. Several communities nearby may be included colloquially in Llanelli. The community of Llanelli had a census population of 25,168 in 2011, estimated in 2019 at 26,225. The local authority had been Llanelli Borough Council while the preserved county of Dyfed existed, but it is now under Carmarthenshire County Council.

Llanelli Town Association Football Club are a semi-professional Welsh football club that plays in the Cymru South. The original club was wound up on 22 April 2013 at the High Court in London following a petition presented by HM Revenue and Customs. They were reformed later that year as Llanelli Town AFC and played in the Welsh Premier League. The club finished 12th in the 2018/19 Welsh Premier League season, and have been relegated after failing to gain a Tier 1 Licence. They played in the Cymru South for the 2019–20 season. 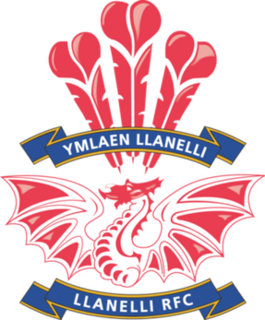 Stradey Park was a rugby union stadium located near the centre of the town of Llanelli in Carmarthenshire, Wales. It was the home of the Scarlets region and Llanelli RFC rugby teams. The stadium was a combination of seating and standing with a total capacity of 10,800. With the Scarlets having moved to Parc y Scarlets, Stradey Park was demolished in 2010 and has since been replaced with housing.

Barry Davies is a Welsh rugby union footballer. Davies has also been capped by Wales at international level. His usual position is at full back.

Thomas Patrick David is a Welsh former dual-code international rugby union and rugby league footballer who played in the 1970s and 1980s. He played representative rugby union (RU) for Wales and the British Lions and rugby league (RL) for Wales. He was selected for the 1974 British Lions tour to South Africa, and at the time played club rugby for Llanelli RFC. He also played for his home-town club Pontypridd RFC, and while at the club was part of the 1976 Grand Slam winning Wales team. In 1981 he switched codes to rugby league, representing Cardiff City Blue Dragons.

The 2007–08 FAW Premier Cup was the 11th season of the tournament since its founding in 1997. Newport County were the eventual winners, beating Llanelli 1–0 in the final to win the competition for the first time in the club's history. 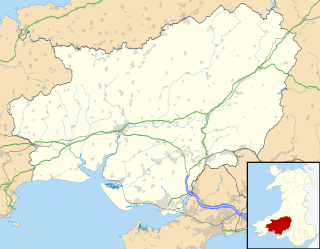 Parc y Scarlets is a rugby union stadium in Llanelli, Carmarthenshire, that opened in November 2008 as the new home of the Scarlets and Llanelli RFC.

Stradey Park is a cricket ground in Llanelli, Carmarthenshire. The first recorded match on the ground was in 1861, when Carmarthenshire played Glamorganshire.

The Wales 'C' National Team is a football team that represents Wales at non-league level. The team is selected using players that play in the Cymru Premier, the highest level of Welsh football.

The UEFA Women's U-19 Championship 2013 Final Tournament was held in Wales between 19 and 31 August 2013. Players born after 1 January 1994 were eligible to participate in this competition.

The West Wales Raiders are a professional rugby league club based in Llanelli, Wales, following a move from Merthyr Tydfil. They play in League 1, the third tier of rugby league in the United Kingdom. The club was formed in 2009 as South Wales Scorpions, initially playing at The Gnoll in Neath before spells at Caerphilly, Mountain Ash and Maesteg. The club was rebranded to South Wales Ironmen to coincide with the move to Merthyr Tydfil in 2017. In July 2017 it was announced that following a takeover the club would be relocating to Llanelli and play their remaining home matches at Stebonheath Park. From 2018 they have been known as West Wales Raiders, the name of the club based at Stebonheath.

The 2018 RFL League 1 was a professional rugby league football competition played in England and Wales and is the third tier of the sport for Rugby Football League (RFL) affiliated clubs.