Steve Asheim (born January 17, 1970) is an American drummer and primary songwriter for the death metal band Deicide. Asheim endorses Pearl, Paiste, Vater, Axis [1] and is known to collect guns, which can be seen in Deicide's DVD When London Burns . Asheim also plays guitar on the album Till Death Do Us Part . On November 20, 2007, Asheim joined the St. Petersburg, Florida-based death/black metal band Order of Ennead as their drummer. [2]

Asheim was born in Freehold, New Jersey and is of Norwegian descent through his grandparents who were from Stavanger. His first instrument was the trumpet, but after a few months, he started playing self-taught drums at age 11 and began to play in small bands at 13. He did his first demo in a studio of one of his school teachers in Freehold, New Jersey. In that period, he developed his interest in extreme drumming. He left his former bandmates because they wanted to play Mötley Crüe, while he was interested in playing Metallica and Slayer. In 1985, he moved to Florida and joined "Carnage," where he met Eric and Brian Hoffman. "Carnage" covered Slayer, Exodus, Celtic Frost and Dark Angel songs. After Carnage disbanded in 1986, Asheim and the Hoffman brothers started writing the early "Amon" songs. In 1987, they met Glen Benton and started demoing. Later, they changed the band name to Deicide.

Asheim was inspired by bands such as Metallica, Slayer, Dark Angel, Destruction, and Sodom. [3] and his main drumming influences include Peter Criss, Clive Burr, Buddy Rich, Lars Ulrich and Dave Lombardo. [4] Asheim also plays lead and rhythm guitar, bass guitar and piano. He listens to classical piano to derive a better idea of what is possible in constructing songs and music.

On 25 January 2007, when making a trip to a bank in Innsbruck, Austria to make a deposit from Deicide merchandise sales, Asheim was arrested on suspicion of connection with a recent bank robbery. Staff were perplexed by his appearance and attire, as well as the fact he was handling money marked in red dye. Detained by police in the local station, he explained the banknotes were legitimate proceeds from touring, and that he had a leaky pen in his pocket which was responsible for the money's discoloration. He was released without further charge. [5] 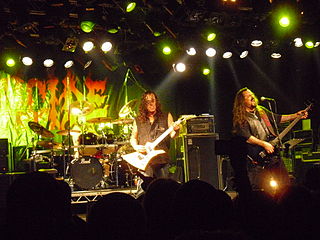 David Lombardo is a Cuban-American drummer, best known as a co-founding member of American thrash metal band Slayer. Lombardo played drums on nine Slayer albums, including, Reign in Blood (1986) and Christ Illusion (2006). He received critical praise for both of these albums. Lombardo's music career has spanned forty years, during which he has been involved in the production of thirty-five commercial recordings covering a number of genres. He has performed with numerous bands, including Grip Inc., Fantômas, Testament, and Suicidal Tendencies, in addition to Slayer. Lombardo is currently playing drums with Fantômas, Suicidal Tendencies, Dead Cross, Mr. Bungle and the Misfits.

Scars of the Crucifix is the seventh studio album by American death metal band Deicide. It was released on February 23, 2004, Deicide's first album on the band's new label Earache Records. The track "Scars of the Crucifix" spawned Deicide's first ever music video, filmed in Nottingham. This was the last album to feature the Hoffman brothers on guitar, after their 17-year tenure with the group. 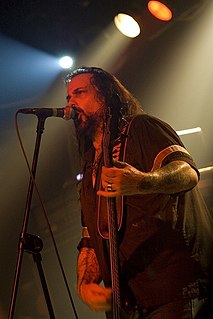 Glen Benton is an American death metal musician. He is best known as the lead vocalist and bassist for the death metal band Deicide and was also a part of the band Vital Remains, where he has performed in recording sessions as well as live with them on a few occasions. He is currently collaborating with Egyptian artist Nader Sadek on his next record "The Malefic: Chapter II". He is known for very low guttural growls as well as very high shrieks.

Deicide is the eponymous debut album by American death metal band Deicide. It was released on June 25, 1990, by Roadrunner Records. The album contains all of their demo tracks, plus the songs "Deicide" and "Mephistopheles".

Nathan Jonas "Joey" Jordison, is an American musician, songwriter, record producer and multi-instrumentalist, best known for his work as the former drummer and co-songwriter for the American heavy metal band Slipknot as well as guitarist in the American horror punk band Murderdolls. Jordison played in Slipknot since their formation in 1995 until his departure from the band in December 2013. He was the drummer and founder of the American heavy metal band Scar the Martyr, which formed in 2013 and disbanded in 2016. He grew up in Waukee, Iowa with his parents and two sisters, and was given his first drum kit at the age of 8. He performed with many different bands early in his career; then in the summer of 1995, he joined the group The Pale Ones, which would later change their name to Slipknot. Of Slipknot's nine-member lineup, which lasted from 1999–2010, Joey was the third to join the band.

Legion is the second album by American death metal band Deicide. It was released by Roadrunner Records on June 9, 1992. 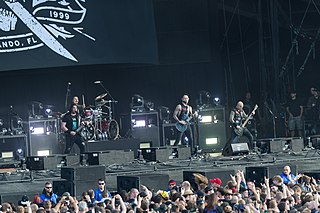 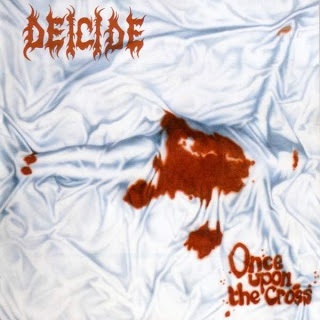 Once Upon the Cross is the third studio album by American death metal band Deicide. It was released on April 18, 1995, by Roadrunner Records. 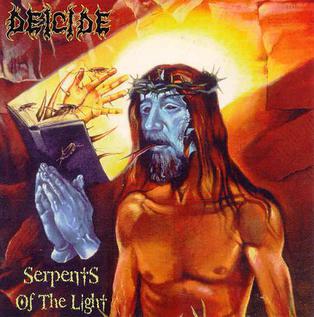 Serpents of the Light is the fourth full-length album by American death metal band Deicide. It was released on October 21, 1997, by Roadrunner Records. 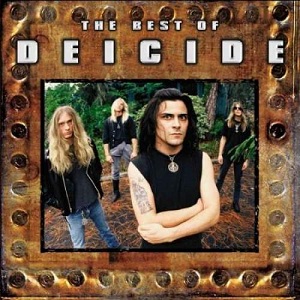 The Best of Deicide is a compilation album by American death metal band Deicide. It is a collection of 20 songs from Deicide's catalogue with Roadrunner Records, the label with whom the band had recently ended its career-long record deal. However, no songs from In Torment in Hell are included on this compilation. 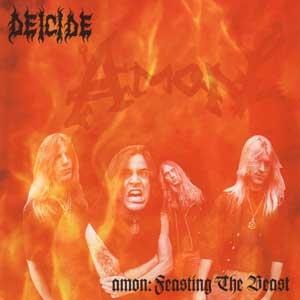 Insineratehymn is the fifth studio album by American death metal band Deicide. The band's songwriting on this album exhibits songs with slower and more atmospheric grooves. The track "Bible Basher" is the only song that has become a staple in the band's live set. Rather than being about God, the song "Forever Hate You" is directed at Glen Benton's ex-wife.

In Torment in Hell is the sixth studio album by American death metal band Deicide. It was released on September 25, 2001, on Roadrunner Records. The album received strong criticism from the metal underground for what many critics view as rushed production and lackluster songwriting. The label pressured the band for a quick follow-up to Insineratehymn, but Deicide failed to meet the deadline of its original release date of July 31. The band rarely plays any songs from this album live.

The Stench of Redemption is the eighth studio album by American death metal band Deicide. It is the first album by the band to feature Jack Owen and Ralph Santolla on guitars. Some editions of the album include a cover of "Black Night" by Deep Purple, with rewritten lyrics by Glen Benton. 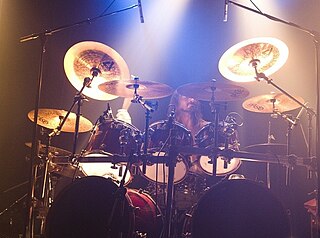 Order of Ennead is an American self-described 'philosophical virtuoso death metal' band that was formed in Tampa, Florida. It includes two members of the death metal band Deicide, and the student of a former guitarist of the band. Order of Ennead have released two albums to date. 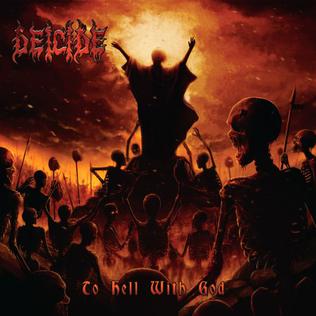 To Hell with God is the tenth studio album by American death metal band Deicide. The follow-up to Till Death Do Us Part (2008), it was originally intended to be released in 2009 before being pushed back to a 2010 release, and was finally released on February 15, 2011, through Century Media Records. It is the last Deicide album to feature guitarist Ralph Santolla, and the first not to be produced by drummer Steve Asheim since Scars of the Crucifix (2004); instead To Hell with God was produced by Mark Lewis. A claymation video for "Conviction" was released through Century Media's YouTube channel on February 27, 2012.

In the Minds of Evil is the eleventh studio album by American death metal band Deicide. It was released on November 26, 2013, by Century Media Records. It was the first album to feature guitarist Kevin Quirion and the last to feature guitarist Jack Owen. The album has been described as moving away from the melodic inclinations of the previous few albums and towards an "old school" death metal sound reminiscent of Legion.