Last updated May 01, 2022
Open-air shopping mall common in North America, usually adjacent to parking along a major road
This article is about the shopping centers. For the sitcom, see Strip Mall.

A strip mall or strip center or strip plaza is a type of shopping center common in North America where the stores are arranged in a row, with a sidewalk in front. Strip malls are typically developed as a unit and have large parking lots in front. Many of them face major traffic arterials and tend to be self-contained with few pedestrian connections to surrounding neighborhoods. Smaller strip malls may be called mini-malls, while larger ones may be called power centers or big box centers. In 2013, The New York Times reported that the United States had 65,840 strip malls. [1] In 2020, the Wall Street Journal wrote that in the United States, despite the continuing retail apocalypse starting around 2010, investments and visitor numbers were increasing to strip malls. [2]

In the United Kingdom and Ireland, strip malls are called retail parks or retail outlets. They are located on the outskirts of most towns and cities as an alternative to the High Street in the UK or Main Street in Ireland. Retail parks have become popular due to the widespread use of cars and the ability to park close to the shops as opposed to the High Street, which is usually pedestrianised.

In Australia, "strip shops" or "shopping strip" describes a line of independent shops and buildings along the principal streets of a city or suburban area, which are not set back from the pavement (sidewalk) and do not have dedicated car parking spaces. [3]

The Park and Shop in Cleveland Park, Washington, D.C. opened in 1930, anchored by a Piggly Wiggly supermarket. It was built in an L shape with dedicated parking space for shoppers in the front, a novelty at the time. The center still exists as of 2020, anchored by a Target store [6] and measuring 50,400 square feet (4,680 m2). [7]

The smaller variety is more common and often located at the intersection of major streets in residential areas; it caters to a small residential area. [1] This type of strip mall or plaza is found in nearly every city or town in the United States and Canada; it is service-oriented and may contain a grocery store, hair salon, dry cleaner, laundromat, small restaurant, discount stores, variety stores, and similar stores such as a general store, toy store, pet store, jewelry store, mattress store, convenience store, thrift shop, or pawn shop. In the past, pharmacies were often located next to the grocery stores, but are now often free-standing or contained within the anchor tenant (e.g. Walmart, Target) or grocery store. Gas stations, banks, and other businesses also may have their own free-standing buildings in the parking lot of the strip center.

The mini-mall in Los Angeles is seen as the descendant of the drive-in markets with multiple independent vendors that appeared in the area in the 1920s. The 1973 oil crisis bankrupted many gas stations, freeing up their corner lots for redevelopment. La Mancha developers built the first modern-style mini-mall – a few stores with parking in front – in Panorama City, Los Angeles in 1973, with over 600 to follow in the metropolitan area. The proliferation of mini-malls from that time into the 1980s led to a 1988 anti-mini-mall ordinance in Los Angeles. [8] [9] [10]

The other variety of strip mall in the United States is usually anchored on one end by a big box retailer, such as Walmart, Kohl's or Target, and/or by a large supermarket like Kroger, Publix or Winn-Dixie on the other. They are usually referred to as power centers in the real estate development industry because they attract and cater to residents of an expanded population area. The categories of retailers may vary widely, from electronics stores to bookstores to home improvement stores, dollar stores, and boutiques. There are typically only a few of this type of strip malls in a city, compared to the smaller types. Retailers vary from center to center, ranging from three or four large retailers to a dozen or more. Some strip malls are hybrids of these types. 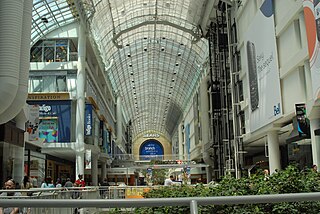 A shopping center or shopping centre, also called a shopping complex, shopping arcade, shopping plaza or galleria, is a group of shops built together, sometimes under one roof. 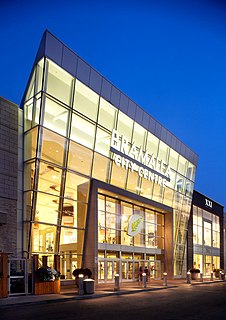 SouthPark is an upscale shopping mall in the affluent SouthPark neighborhood in Charlotte, North Carolina. The mall is located approximately five miles (8 km) south of Uptown Charlotte, at the corner of Sharon and Fairview Roads. With 1,678,376 square feet (160,000 m2), It is one of the most profitable malls in the country with sales at over $700 per square foot. It is the 10th largest on the East Coast and is the 28th largest in the United States. SouthPark is the most congested shopping area in the United States during Black Friday weekend.

A big-box store is a physically large retail establishment, usually part of a chain of stores. The term sometimes also refers, by extension, to the company that operates the store. 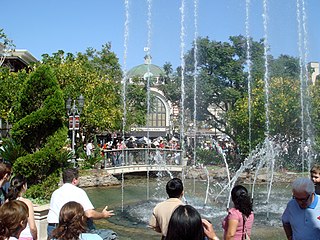 A retail park is a type of shopping centre found on the fringes of most large towns and cities in the United Kingdom and other European countries. They form a key aspect of European retail geographies, alongside indoor shopping centres, standalone stores like hypermarkets and more traditional high streets. In retail, an "anchor tenant", sometimes called an "anchor store", "draw tenant", or "key tenant", is a considerably larger tenant in a shopping mall, often a department store or retail chain. They are typically located at the ends of malls. With their broad appeal, they are intended to attract a significant cross-section of the shopping public to the center. They are often offered steep discounts on rent in exchange for signing long-term leases in order to provide steady cash flows for the mall owners. Some examples of anchor stores in the United States are Macy's, Sears, JCPenney, Nordstrom, Neiman Marcus, Saks Fifth Avenue.

Marlborough Mall is a shopping mall located in Calgary, Alberta, Canada. Opened in October 1972, the mall has expanded several times and today includes approximately 100 stores and services, and encompasses over 584,000 square feet. The mall also featured a Safeway until the 1990s, when the store moved to its own location west of 36th Street.

The Shoppes at Carlsbad is a shopping mall in Carlsbad, California. The mall was originally named Plaza Camino Real when it was built in 1969, but was rebranded several times when it was a Westfield Holdings property (1994-2015). Its anchor stores are JCPenney and Macy's. A Robinsons-May closed in 2006, while Sears closed on December 15, 2019.

The Station Mall, is a shopping mall located in Sault Ste. Marie, Ontario, Canada. With 97 stores and 555,000 square feet (51,600 m2) of retail space, it is the second largest shopping mall in Northern Ontario, trailing just behind the New Sudbury Centre in Greater Sudbury in area. Built in 1973, the mall has since undergone two major expansions. Its major tenants include 52,000 square feet (4,800 m2) Galaxy Cinemas movie theatre complex. The mall is located on the waterfront in downtown Sault Ste. Marie, and is roughly five minutes away from the Sault Ste. Marie International Bridge to the United States. The Sault Ste. Marie railway station is located in the mall's parking lot.

Baldwin Hills Crenshaw Plaza is a shopping mall located in the Baldwin Hills neighborhood of Los Angeles, California. This was one of the first regional shopping centers in the United States built specifically for the automobile. Two anchor buildings, completed in 1947, retain their original Streamline Moderne style. Since the mid-1960s, the mall has become a major economic and cultural hub of surrounding African American communities which include a spectrum of socioeconomic classes.

Florin Towne Centre, formerly Florin Mall and Florin Center, is an outdoor shopping center in the unincorporated area of Parkway-South Sacramento near Sacramento, California, United States. It opened in 2008 on the site of the old Florin Mall, which closed and was demolished in 2006. The 484,500 square feet (45,010 m2) center is anchored by AutoZone, PetSmart and Walmart Supercenter.

A power center or big-box center is a shopping center with typically 250,000 to 600,000 square feet of gross leasable area that usually contains three or more big box anchor tenants and various smaller retailers, where the anchors occupy 75–90% of the total area. 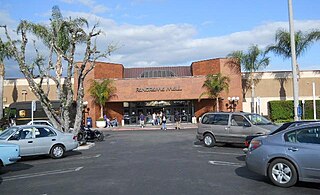 Panorama Mall is a mall in Panorama City, San Fernando Valley, Los Angeles, California. It is an enclosed mall anchored by two large discount stores, Walmart and Curacao, aimed primarily at a Hispanic customer base.

A neighborhood shopping center is an industry term in the United States for a shopping center with 30,000 to 125,000 square feet of gross leasable area, typically anchored by a supermarket and/or large drugstore.

Retail in Southern California dates back to its first dry goods store that Jonathan Temple opened in 1827 on Calle Principal, when Los Angeles was still a Mexican village. After the American conquest, as the pueblo grew into a small town surpassing 4,000 population in 1860, dry goods stores continued to open, including the forerunners of what would be local chains. Larger retailers moved progressively further south to the 1880s-1890s Central Business District, which was later razed to become the Civic Center. Starting in the mid-1890s, major stores moved ever southward, first onto Broadway around 3rd, then starting in 1905 to Broadway between 4th and 9th, then starting in 1915 westward onto West Seventh Street up to Figueroa. For half a century Broadway and Seventh streets together formed one of America's largest and busiest downtown shopping districts.

Country Club Centre is a shopping center in the Arden-Arcade area in unincorporated Sacramento County, California, United States in the Sacramento area. It is located at the southwest corner of El Camino and Watt Avenues, diagonally across from what was the very first stand-alone store of the now defunct Tower Records chain. It originally opened as a small strip shopping center in 1952 that was later expanded into a regional mall and then later converted into a mixed use of office and retail. The shopping center is currently anchored by the Sacramento area’s only Costco Business Center. It was previously anchored by Walmart (closed), Sam's Club and Michaels (relocated).