Supergrass is a British slang term for an informant who turns Queen's evidence, often in return for protection and immunity from prosecution. In the British criminal world, police informants have been called "grasses" since the late 1930s, and the "super" prefix was coined by journalists in the early 1970s to describe those who witnessed against fellow criminals in a series of high-profile mass trials at the time. [1]

The first known use of "grass" in that context is Arthur Gardner's crime novel Tinker's Kitchen, published in 1932, in which a "grass" is defined as "an informer". [2] The origin of the term "grass" being used as signifying a traitor, a person who informs on people he or she knows intimately, ostensibly can be traced to the expression "snake in the grass", which has a similar meaning. [3] The phrase derives from the writings of Virgil (in Latin, latet anguis in herba) and has been known in the English language, meaning "traitor", since the late 17th century. [4]

An alternative claim is made for the term originating from rhyming slang, whereby "grasshopper" is defined as "copper", meaning "policeman". [5] The rhyming slang version was supported in 1950 by lexicographer Paul Tempest, who wrote [6]

Grasser. One who gives information. A "squealer" or "squeaker". The origin derives from rhyming slang: grasshopper – copper; a "grass" or "grasser" tells the "copper" or policeman.

In Northern Ireland, the term "supergrass" especially refers to arrested paramilitaries who divulged the identities of their compatriots to the Royal Ulster Constabulary, possibly in exchange for immunity from prosecution. Sir John Hermon did not deny reports that inducements were paid but denied figures as high as £50,000 were involved. [7] The use of the term in Northern Ireland began with the arrest of Christopher Black in 1981. After securing assurances that he would have protection from prosecution, Black gave statements which led to 38 arrests. On 5 August 1983, 22 members of the Provisional IRA were sentenced to a total of more than 4,000 cumulative years in prison, based on Black's testimonies alone (eighteen of these convictions were overturned on appeal on 17 July 1986). [8]

By the end of 1982, 25 more 'supergrasses' had surfaced contributing to the arrests of over six hundred people from paramilitary organizations, such as the Provisional IRA, the Irish National Liberation Army (INLA) and the Ulster Volunteer Force. On 11 April 1983, members of the loyalist Ulster Volunteer Force were jailed on the evidence of supergrass Joseph Bennett. These convictions were all overturned on 24 December 1984. In October 1983, seven people were convicted on the evidence provided by supergrass Kevin McGrady although the trial judge Lord Chief Justice Robert Lowry had described McGrady's evidence as "bizarre, incredible and contradictory". [9] The last supergrass trial finished on 18 December 1985, when 25 members of the INLA were jailed on the evidence of Harry Kirkpatrick. Twenty-four of these convictions were later overturned on 23 December 1986.

Many convictions based on supergrass testimony were later overturned, and the supergrass system was discontinued in 1985 until reintroduction in 2011. The first supergrass trial in 26 years began on 8 September 2011 for the murder of Ulster Defence Association (UDA) member Tommy English. In Northern Ireland the term "tout" is a popular alternative to "grass". The Police Service of Northern Ireland have refused to use this term and prefer the term Assisting Offender, based on the legislation that enables the use of such evidence. [10]

The term has also been used by The Royal Gazette , a daily newspaper in Bermuda, a British dependent territory. An article in the paper uses the term to describe a Transport Control Department worker convicted of selling driver's licenses to Portuguese applicants lacking the necessary English skills to pass the multiple choice exam. The worker was granted a conditional discharge in exchange for information on other Transport Control Department employees abusing the public trust. [11]

One of the most prolific supergrasses in recent British history was Michael Michael whose evidence in 2001 led to 32 criminals being convicted, including his own mother, and the disruption of a £132 million drug ring. [12]

The term was used to describe Girolamo Bruzzese after his brother Marcello was assassinated by the 'Ndrangheta on Christmas Day 2018 in revenge for Girolamo's serving as a witness in court against the 'Ndrangheta. [13]

Gerard Adams is an Irish republican politician who was the President of Sinn Féin political party between 13 November 1983 and 10 February 2018, and served as a Teachta Dála (TD) for Louth from 2011 to 2020. From 1983 to 1992 and from 1997 to 2011, he was an abstentionist Member of Parliament (MP) of the British Parliament for the Belfast West constituency. 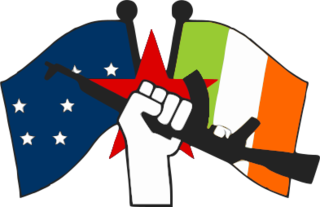 The Irish National Liberation Army is an Irish republican socialist paramilitary group formed on 10 December 1974, during "the Troubles". It seeks to remove Northern Ireland from the United Kingdom and create a socialist republic encompassing all of Ireland. It is the paramilitary wing of the Irish Republican Socialist Party (IRSP).

Michael McKevitt is an Irish republican who was convicted of directing terrorism as the leader of the paramilitary organisation, the Real IRA.

The Irish Republican Socialist Party or IRSP is a republican socialist party active in Ireland. It is often referred to as the "political wing" of the Irish National Liberation Army (INLA) paramilitary group and claims the legacy of socialist revolutionary James Connolly, who founded the Irish Socialist Republican Party in 1896 and was executed after the Easter Rising of 1916. The Irish People's Liberation Organisation was a small Irish republican paramilitary organisation which was formed in 1986 by disaffected and expelled members of the Irish National Liberation Army (INLA) whose factions coalesced in the aftermath of the supergrass trials. It developed a reputation for intra-republican and sectarian violence and criminality, before being forcibly disbanded by the Provisional Irish Republican Army (IRA) in 1992. 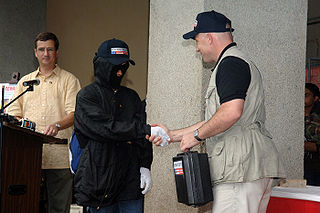 An informant is a person who provides privileged information about a person or organization to an agency. The term is usually used within the law enforcement world, where they are officially known as confidential human source (CHS), or criminal informants (CI). It can also refer pejoratively to someone who supplies information without the consent of the involved parties. The term is commonly used in politics, industry, entertainment, and academia.

Henry Kirkpatrick is a former Irish National Liberation Army member turned informer against other members of the INLA.

Hugh Torney, was an Irish National Liberation Army (INLA) paramilitary leader best known for his activities on behalf of the INLA and Irish Republican Socialist Party (IRSP) in a feud with the Irish People's Liberation Organisation (IPLO), a grouping composed of disgruntled former INLA members, in the mid-1980s.

The Droppin Well bombing or Ballykelly bombing occurred on 6 December 1982, when the Irish National Liberation Army (INLA) exploded a time bomb at a disco in Ballykelly, Northern Ireland. The disco, known as the Droppin Well, was targeted because it was frequented by British Army soldiers from nearby Shackleton Barracks. The bomb killed eleven soldiers and six civilians; 30 people were injured, this made it the most deadly attack during the INLA's paramilitary campaign and the most deadly attack during The Troubles carried out in County Londonderry.

The Troubles in Keady refers to incidents taking place in Keady, County Armagh, Northern Ireland during the Troubles.

Liam "Billy" McMillen was an Irish republican activist and an officer of the Official Irish Republican Army (OIRA) from Belfast, Northern Ireland. He was killed in 1975, in a feud with the Irish National Liberation Army (INLA).

Raymond Gilmour was an Irish National Liberation Army (INLA) and Provisional Irish Republican Army (IRA) volunteer who worked clandestinely from 1977 to 1982 for the Royal Ulster Constabulary (RUC) within those paramilitary organisations. His testimony was a main element of the supergrass policy, which was aimed at convicting large numbers of paramilitaries. 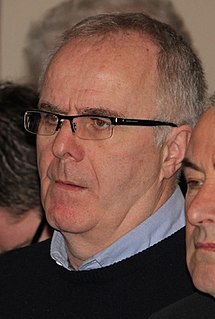 Raymond McCartney is an Irish former Sinn Féin politician, and a former hunger striker and volunteer of the Provisional Irish Republican Army (IRA).

The Belfast Brigade of the Provisional IRA was the largest of the organisation's brigades, based in the city of Belfast. 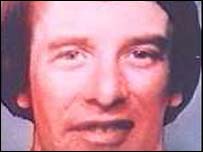 Brian Nelson was an Ulster loyalist paramilitary during The Troubles in Northern Ireland. He was an intelligence chief of the Ulster Defence Association (UDA), and also a clandestine agent for the British Army during the conflict.

Kevin McGrady is a former Provisional IRA member who became an informer in 1982 following his conversion to born again Christianity. As a result of evidence provided by McGrady, seven people were convicted at the supergrass trial presided over by Northern Ireland's Lord Chief Justice Robert Lowry.

Robert Seymour was a Northern Irish loyalist and a leading member of the Ulster Volunteer Force (UVF). He served as the paramilitary organisation's East Belfast commander before being shot dead by the Provisional IRA in an alley behind his video shop in Woodstock Road, east Belfast. His killing was in retaliation for the UVF bombing of a nationalist pub in which three Catholics died.

James Trevor King, also known as "Kingso", was a British Ulster loyalist and a senior member of the Ulster Volunteer Force (UVF). He was commander of the UVF's "B" Company, 1st Belfast Battalion, holding the rank of lieutenant colonel. On 16 June 1994, he was one of three UVF men gunned down by the Irish National Liberation Army as he stood on the corner of Spier's Place and the Shankill Road in West Belfast, close to the UVF headquarters. His companion Colin Craig was killed on the spot, and David Hamilton, who was seriously wounded, died the next day in hospital. King was also badly injured; he lived for three weeks on a life-support machine before making the decision himself to turn it off.